We are a stay-at-home people these days. We all have this new strain of Coronavirus to thank for that.

That means that we, especially us sports fans, have been glued, perhaps unhealthily, to our television sets. Old movies, reruns we’ve seen a thousand times, NFL drafts televised directly from Roger Goodell’s basement and hopefully, for our sanity, very little ‘news’ broadcasts as we struggle to find something, anything, on the boob tube to keep us entertained.

Enter ESPN and the Michael Jordan-approved, 10-part documentary about who else… Michael Jordan. In case you forgot how awesome he was, he would like to remind you. 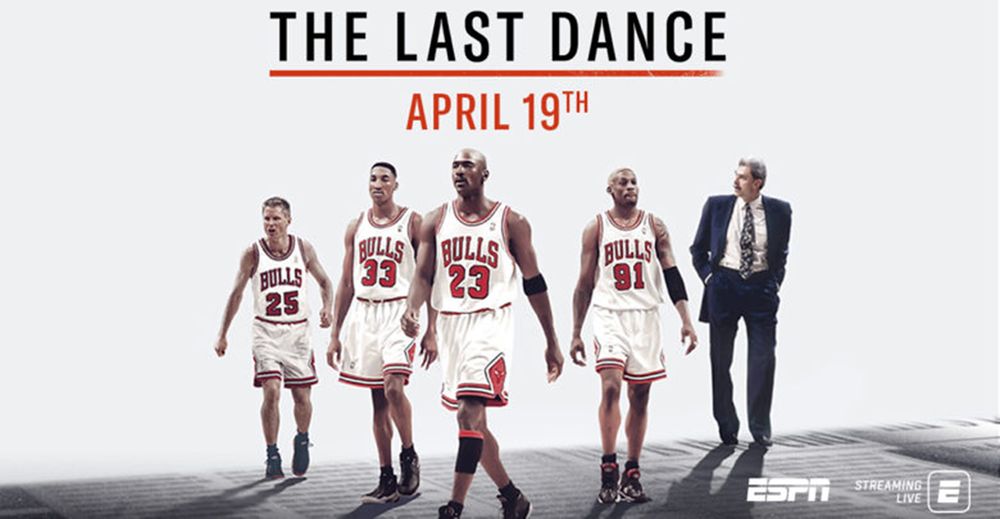 The four-letter has already televised its first four episodes, two parts each on the last two Sundays, detailing the end of the NBA’s last great, or at least most glorified dynasty. In the first two episodes, we found a common, overarching theme… the blaming of former GM Jerry Krause for dismantling the franchise. His actions or inactions became the premise for why things ultimately went south. The unappreciation of an underpaid Scottie Pippen, a one-term deal for a coach that had won five titles and one “short, fat” man’s, Napoleonic desire to start anew and prove he could build a title-contending team once again. After all, it was he who built it in the first place.

For anyone who was glued to Michael and Company’s run at greatness during that time, and for anyone who has attempted fruitlessly to understand Michael Jordan’s psyche, it should come as no surprise that the man with the pulpit has decided to throw a few punches with (t)his ten-part documentary. Rest assured that no footage would make this series without his Airness’ approval.

The latest villain to emerge from Parts Three and Four of this entertaining yet clearly self-serving documentary is Isiah Thomas. 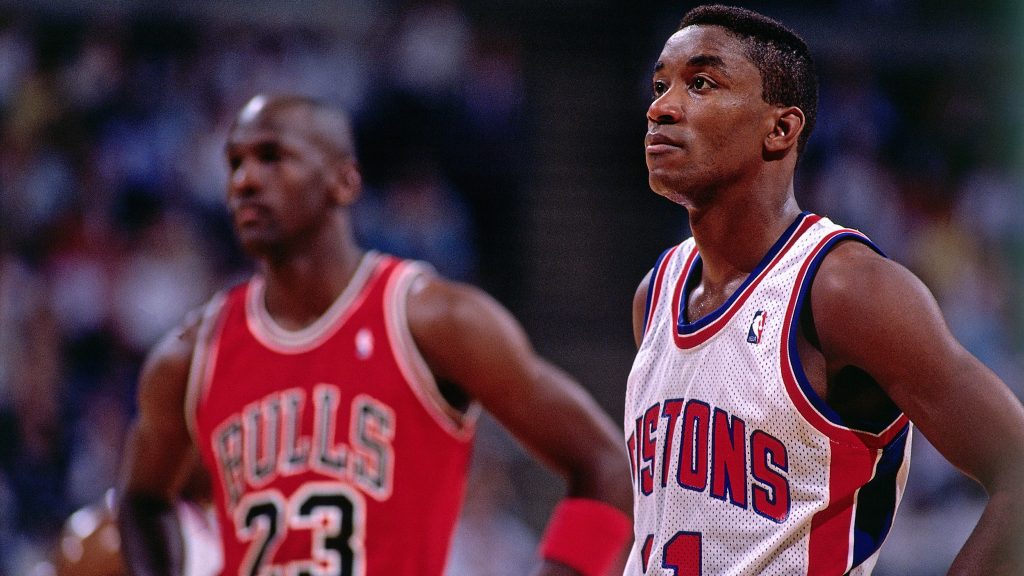 For those of you who didn’t start watching the NBA until this century, the 6’1” Thomas was one bad-ass mother fucker. A national champion under Bobby Knight at Indiana University, if you’re not mentioning his career accomplishments in the same breath as Michael, Magic and Larry, then you are doing this self-proclaimed bad boy a tremendous disservice. Sandwiched in between those Lakers/Celtics titles of the 80s and Bulls trophies of the 90s were back-to-back championships from one of the greatest coaches ever, Chuck Daly, and one of the nastiest (dirtiest?) teams to ever (dis)grace the league.

The Pistons’ mark on that time is as notable as its competitors. Yes, they were known for throwing people to the ground. While that sort of thing wasn’t necessarily approved by the NBA of yesteryear, the refs back then weren’t as whistle-happy as they are now. If you drove the lane against the Pistons, especially if your name was Michael Jordan, you best be prepared to emerge with a limp. 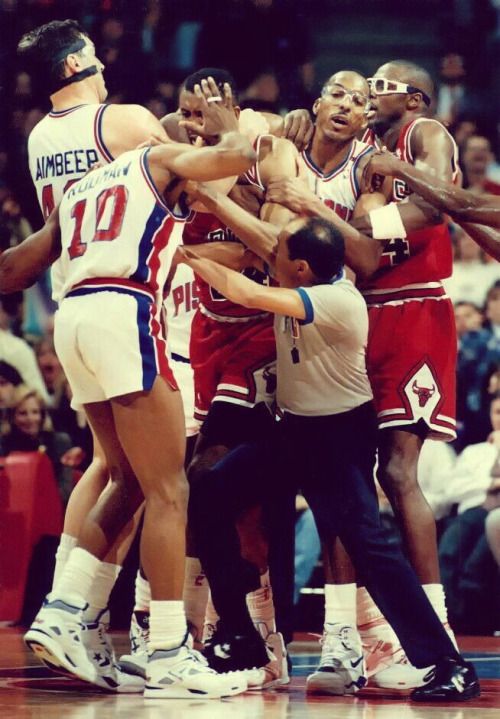 It was an intimidating brand of basketball yet, what is quite often forgotten amidst all the throwdowns, Detroit was also quite skilled. Joe Dumars, John Salley, Dennis Rodman, Vinnie Johnson, Mark Aguirre, Bill Laimbeer, Doc Edwards and most certainly Isiah Thomas were all tremendous basketball players. They were as mentally tough as they were physical; they found their niche in how to beat you… sometimes to a pulp.

Among the countless, unsportsmanlike dalliances with which the Pistons engaged came when the Bulls finally beat them in 1990. It marked the official end of the Bad Boy Pistons era. Chicago was done being pushed around and beat the team that had perennially stood in their way to a championship. After being swept, the Pistons walked off the floor without shaking any of the Bulls hands. It was kind of a big deal back then. Apparently, it still is.

Call it what you will but back in the day, teams generally hated one another, especially after beating the crap out of each other season after season and series after series. Back then, the NBA was neither kinder nor gentler.

Now, ESPN’s documentary would like to remind you how much of a dick Isiah Thomas was… but again, if you’ve followed the NBA for any respectable period of time, this was something you already knew. He barked out those “if Larry Bird were black, he’d be just another player” comments. He was excluded from the original Dream Team. There were the sexual assault allegations while he ran the Knicks. And countless other stories remind us that you either like Isiah or you hate him. He’s Isiah Thomas and he probably couldn’t care less.

It’s been thirty years since the Bulls beat the Pistons and the Last Dance reminds us that Michael Jordan still cannot stand Isiah Thomas nor can he let bygones be bygones. Jordan claims that Isiah backtracked on his story, saying the Pistons didn’t shake hands with the Bulls because that’s just how things were done back then, that the Celtics didn’t shake Detroit’s hand either. This was an NBA rite of passage.

The thing is, we didn’t really need to be reminded that Thomas and the Pistons were assholes, unless of course, the long arm of Michael Jordan is trying to get a whole new generation of basketball fans to hate them…which I’m pretty sure the Pistons are okay with. 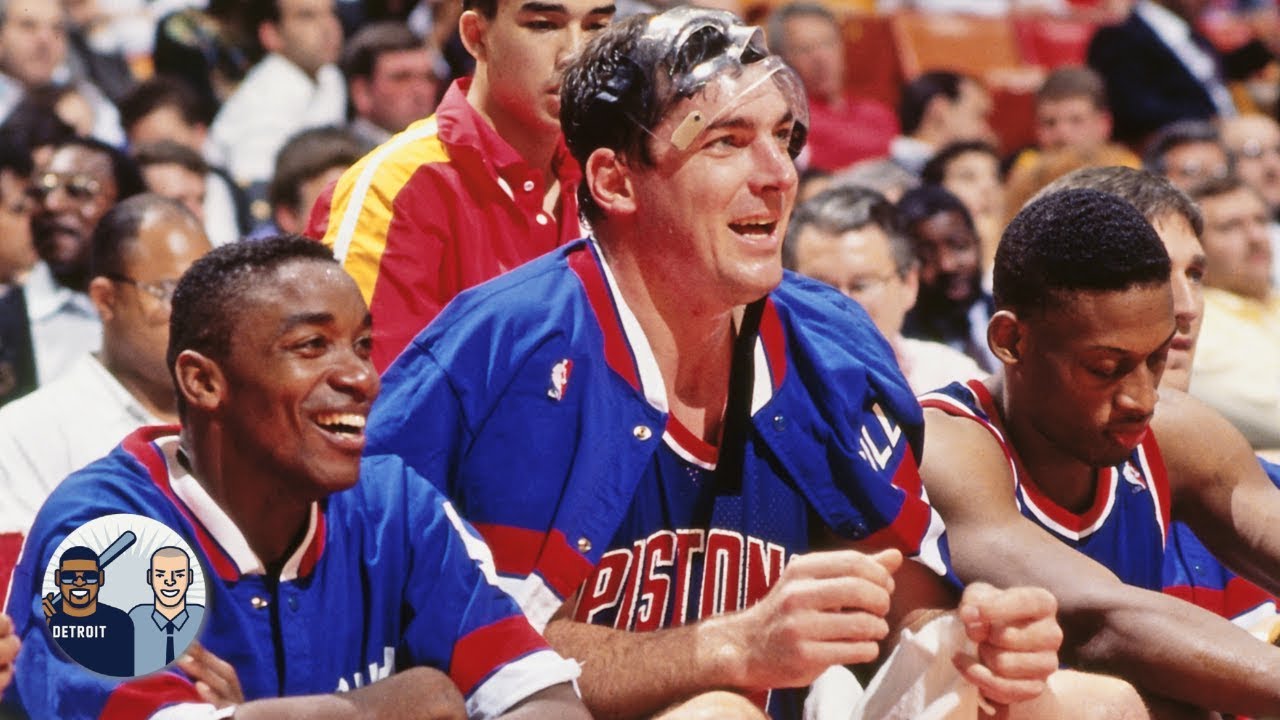 Look, I watched every minute of every Bulls-Piston series when it was actually happening. There were very few NBA fans outside of Motor City that weren’t rooting for the Bulls to get over that hump. The Pistons were called the Bad Boys for a reason. They were not very popular, especially considering they were going after what the NBA’s golden children either had, or wanted. However, thirty years later, for the Bulls to continue to complain about how they didn’t receive a hearty embrace from their opponents comes off as petulant. The Pistons acknowledged the Bulls had become the better team but they’ll be damned if they were going to be happy about it.

I’m a sportsmanlike guy. When I play a game of pick-up, win or lose, I’m the first to say good game. The Pistons refusing to do so simply added to their mystique. It’s not right, it’s not wrong, it’s just Pistons.

The Bulls got theirs. They finally won. It’s about time they get over the handshake thing, or lack thereof. Had their beef with feeling disrespected not come on the heels of complaining about how their boss wanted to break up the team (boo hoo!), it might not have sounded as petty.

We get it. Isiah’s a dick. We know this. But for Michael to keep calling him a dick makes Michael sound like the dick we all kind of knew he was.

But in the end, I suppose, Michael got what he wanted… which was all of us talking about him again. And again, Isiah probably couldn’t care less.