Back in the day, when I used to reside in the City of the Rat, I had a friend that ran a local radio station.  Let’s call him Brotha E.  Now as a result of his high-standing in the community, and the fact that his radio station aired Orlando Magic games, Brotha E would often score free tickets into the pre-Dwight Howard O-Rena.  These were the T-Mac days, always entertaining since you never knew when Kid Auburndale was going to go off for 40.  Plus it was always enjoyable to see if Grant Hill’s ankle boot and crutches matched his $3,000 Armani suit.

As we were generally granted media passes along with our tickets, Brotha E, the Don Calvino and I would strut in through the back hallways of the arena and walk around like we owned the place, sneaking from bar to bar to ensure we were properly liquid-aided throughout the evening’s festivities.  The Magic were competitive back then, but as we now know since T-Mac has still never led his team out of the first round of the playoffs, how competitive could they be.

We must have gone to about twenty home games that year, watching most of them in the lower bowl and wagering with other Magic fans as to whether Bo Outlaw, a career 52% free throw shooter, would ceremoniously brick both attempts from the stripe.

Well, one night late in the season, the Magic were looking to make a playoff push and needed a veteran presence on the perimeter, so they signed Dee Brown to a 10-day contract.  This was obviously before his San Antonio Silver Stars and ESPN analyst days.  That night, Dee came off the bench and gave the Magic the boost they needed to win the game, hitting some late, clutch three-pointers. 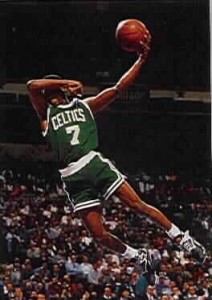 All of Orlando was in good spirits, as were the Treacherous Three as we were probably eight whiskeys in, but who’s counting.  Since we still had our media passes, we decided to check out the post-game press conference.  Doc Rivers was still coaching the Magic at the time.

Considering the Magic had just won the ballgame, the press room was surprisingly morose.  Rivers, giddy from the victory, sat in front of the cameras and reporters waiting for someone to ask a relevant question, yet the press failed to oblige.  The press room was morgue-like as if the Magic had just been defeated. That was until Brotha E, standing at the back of the room, Jack and Coke in hand and press pass dangling unevenly around his neck, shouted out “Coach!  Dee Brown!  Quality minutes!”

A smile instantly came to Doc’s face as if this was exactly the question he’d been anticipating.  He proceeded to spend the next ten minutes elaborating on what an acquisition Dee had been, what big shots he hit and how he was just what they needed.  After all, Dee did help win the game.  Perhaps the press hadn’t been paying attention.  The Don, already nervous about sneaking into the press conference, looked on in amazement as Brotha E, as if sprinkling fairy dust with a single statement, had brought the Magic coach to life.  Brotha E has that effect on people.  It was much like those Coors Light commercials where the guys standing in the back of the room ask coaches questions that they give canned answers to.  If only we had thought of that first.  Oh wait, we did.

Originally written for Foxsports.com on Mar 3, 2008