What’s all this fuss about steroid use? So what if Manny Ramirez recently tested positive for estrogen and fertility drugs? Who cares if Alex Rodriguez lied… then lied… then lied again about ingesting some unknown, under-the-counter, Dominican growth hormone? Performance enhancing drugs have so thoroughly permeated our national pastime that fans of the sport, if there are any left, have become numb to any new scandals. If it became public that Commissioner Bud Selig personally injected Mark McGwire and Sammy Sosa during their 1998 home run chase, I’m not sure anyone would be overly surprised at this point. He might as well have, right So from here on out, let’s flip the script. Since a still unknown percentage of baseball players regularly used steroids and since we’re already building new stadiums that nobody can afford to get into, I say we take it one step further. I hereby submit we allow steroid use and simply enlarge the stadiums. Baseballs are already flying out of the new Yankee Stadium at a record-setting pace. Just keep the players on the juice and make the parks larger. It will give the fans more entertainment value for their hard earned dollar. Get Big Papi (back) on the juice so he can finally start hitting again. Just make the Green Monster that much larger. Raise the wall another ten or fifteen feet and let the syringe (back) into the clubhouse.

While we’re at it, let’s allow steroids in basketball too. Don’t we all prefer seeing a movie in IMAX format as opposed to the smaller, run-of-the-mill, dollar theater variety? Just make the rims 12 feet tall like Dwight Howard once requested in a recent dunk contest and have at it. Dwight’s delts already need double doors for comfortable entry into Amway Arena. Imagine him on the juice. Tear down the wall! Or better yet, imagine LBJ on HGH. At 24, he’s already arguably the most phenomenal player many of us have ever seen. He’d be even more spectacular on the juice, wouldn’t he? He’d be averaging quadruple-doubles in no time.

Allow steroids back into the NFL. Just make the field larger than a CFL field to accommodate for the larger player. Within seasons, we could entirely rewrite the record books. 2,000 rushing yard seasons would be a thing of the past. Dan Marino’s single season passing record would also go down to beefed up quarterbacks with cannons for arms. And better yet, Brett Favre could come back and play for ten more years. I mean, who doesn’t want more Brett Favre coverage?

Introduce steroids to the PGA Tour. Just move the tournament tees back another hundred or so yards. They’ve already Tiger-proofed half the courses on tour. What’s another bit of urban and regional planning going to hurt? Heck, it’ll provide the country with some well-needed employment.

Why stop there? The Professional Bowler’s Tour could have its ‘athletes’ juice up. Just add more pins in the lane like that Wii bowling game. Competitive Scrabble players could shoot up before a big match, then routinely place multisyllabic 20-letter words on the board with ease. We’ve already seen what Marion Jones and Ben Johnson can do on the juice. Imagine how much faster NASCAR drivers could drive on HGH. Track records would fall by the wayside. Hockey fans, you want more fights? Imagine the bloodshed in a juiced up NHL. And boxing! Talk about a surefire way to rejuvenate the heavyweight division. Someone get me Don King on the phone. 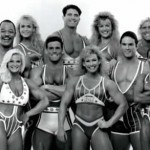 Hey, American Gladiators lasted seven seasons and is now back on the air. You can’t tell me that Nitro, Lace and Gemini weren’t carrying around their own personal medicine bags for pre-show warm-ups. Even our former Chairman of the President’s Council on Physical Fitness and Sports, Arnold Schwarzenegger, was a user, so why should we turn our nose up at it now?

Of course, I’m kidding. Steroid related deaths of athletes past show the dangers of such irresponsible drug use. One need only recall images of a withering Lyle Alzado in his final days to think twice about putting that stuff into your system. Perhaps Manny missed that memo. 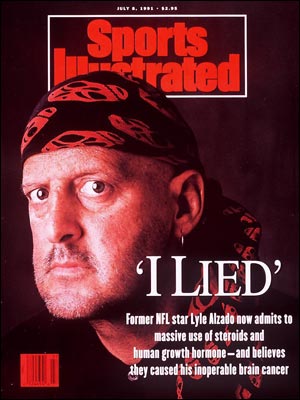 Fortunately, sportschump.net has a strict don’t ask-don’t tell policy regarding drug use, which is why it only took me seconds to knock out this article. As one of my loyal readers and fellow writers, Elk, wisely proclaimed “If [athletes are] willing to sacrifice their long term health for my entertainment, all the power to them.”

He’s right. If athletes are selling their souls to the pharmacist, at least they’re getting a good price.

38 Replies to “Steps Towards a Less Steroid-Phobic Society: Everybody Grab a Syringe”