Congratulations to the Los Angeles Lakers on their 15th NBA championship.  They remain the winningest professional sports franchise by percentage over the last forty years.  If you don’t believe me, look it up.

Despite what might be remembered as a competitive series, the Lakers were simply better than Orlando.  In the end, inconsistent shooting and a lack of experience sealed the Magic fate.  One factor cannot be overlooked: the ineffective play of Dwight Howard.

Phil Jackson and his coaching staff had a brilliant game plan for the Magic big man.  Throughout the series, they threw a number of different looks that the 23-year old phenom was unable to figure out.  The Lakers guarded Howard with Pau Gasol, Andrew Bynum, Lamar Odom and a combination of double-teams to render him ineffective for the series.

It’s easy to point to Dwight’s two missed free throws in Game Four as a major reason the Magic lost in five games, but there is one glaring statistic that led to Orlando’s demise: their post presence was counter-productive. 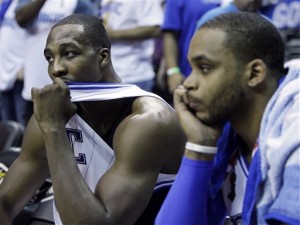 For the series, Dwight Howard had nearly as many turnovers (20) as he had field goals (21).  I’m still waiting for a major sports outlet to report that statistic.  On the flip side, Pau Gasol had 36 field goals and only five turnovers and he’s not even their best player.  That is taking care of the basketball and making every possession count which the Magic in large part were unable to do.

As expected, the series boiled down to who could best exploit mismatches.  In the end, it was Los Angeles.  The Lakers converted Dwight turnovers into fastbreak points and major shifts in momentum.

Dwight, the face of the Orlando franchise, needs to bear the burden for this loss.  He needs to stand up and be held accountable.  In no game did he score more than five field goals.  Gina Marie Incandela was a more effective weapon for the Magic.  On the flipside, Gasol never had less than six.  The word unacceptable comes to mind.

At 23 years of age, it might be unfair to blame the entire loss on Howard’s broad shoulders but an effective post presence would have meant a different series.  While the long, seven-foot Gasol rarely brought the ball below his waist, Dwight regularly brought the ball down low where smaller guards could rip it from his hands.  Fundamentals.

While optimists might argue the Magic were a missed layup and a missed free throw away from being up in this series, the game within the game tells a different story… and the numbers don’t lie.  The Lakers had several different, established scoring options when they desperately needed a basket.  The Magic not so much.

So once again, congratulations to the Lakers and their fans for a fabulous season.  For Dwight Howard and Orlando, it’s back to the drawing board.  If he’s determined to become one of the all-time greats, that must start with fundamentals which the young big man clearly lacks.  Dwight’s future is bright and his faith is strong but he’ll have to strengthen his hands if they ever hope to hoist an NBA trophy.