Soon after moving from Gainesville to Tampa only months ago, I began my search for a local poker game. Such illicit activity is not always easy to find.

Damion 2.0 Wednesday’s were $20 buy-in cash games with re-buys allowed as long as you had money in your wallet. Things would start around 7 pm, with people coming and going all night long. It was a game characterized by über-aggressive play. With blinds holding steady at $0.25-$0.50, it was rare to see a flop for anything less than $3.25. It was not uncommon to see someone win or lose up to $400 in a single night. 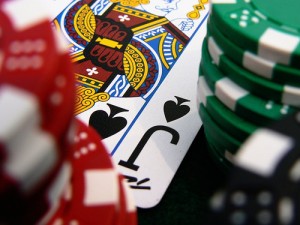 Thursday nights were my original house game at JD’s place, where the liquor was always free-flowing. We’d generally start the night with quarter games, i.e., Five Card Draw, Follow the Queen, In-Between or Screw Your Neighbor. Years back, we’d play tournament style but that slowly made its way to a cash game. A lot of the old school guys dropped out when things got too cutthroat, but the game also gained people as it got more competitive.

Friday nights at Brother Bill’s were much more casual. With as many as 18 players on any given night, Bill’s game was strictly tournament play. A gracious host, Bill’s open bar always kept people animated on a Friday.

I played at all three of these venues for well over a year. The environs were comfortable. Every seat, every table, every format, every friend.

A new friend invited me over to check out his local game. As I had become accustomed to supplementing my (lack of) income with success at my previous three house games, I accepted his invitation looking to make a mark.

When I got there last Monday, it was a different environment indeed. Instead of the usual sports or rock n roll music playing in the background, the crew that had arrived early, a mostly younger group, was watching the “Get Smart” remake. You know you’re getting old when the crowd around you recognizes Alan Arkin, not from “The In-Laws” or “Grosse Pointe Blank”, but rather as the grandfather who dies at the end of “Little Miss Sunshine.” I didn’t necessarily have a problem with the movie being played in the background… until its second viewing. They never changed the channel. A man can only take so much Steve Carrell. Keep in mind, the final game of the Texas-LSU college World Series was on that very evening. Distraction # 1. 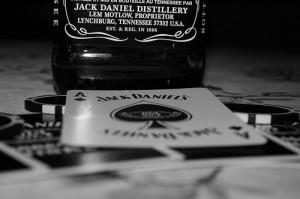 As is protocol with sportschump, I brought my own personal stash of Jack Daniels. Hey, with the amount I drink, I don’t need to mooch off someone else’s bar. That’s a good way to get yourself uninvited from someone’s house game no matter how much money you’re dumping at the table. I gauged their reaction as I placed the bottle on the countertop. Raised eyebrows. No big deal, a few drinks ease my tension at the table. I’m fully aware of the dangers of drinking too much at the poker table. Everything was fine…until their ice machine went down. Warm jack and coke equaled distraction # 2.

There’s a scene at the end of “Hoosiers” where Gene Hackman walks his young team through the largest gymnasium they had ever seen prior to their championship game. Hackman calmly pulls out his tape measure and measures from rim to floor and from baseline to free throw line to prove a point. That court was exactly the same size as the one they practiced on in their home town of Hickory, Indiana.

The same applies with poker. The more experienced poker player knows to set aside the distractions of the new and unfamiliar. While I didn’t play all that poorly that night, finishing 5th out of 14 in the first tourney, I failed to cash in either event. I tightened up my game to gauge the players at the table but failed to do a good job of putting aside the distractions.

What should have mattered, as is true in any poker game is table image, mine and theirs, chip stack and position, not what B-movie was playing too loudly in the background or whether I would have to make an ice run.

If you ever switch venues, or even online poker, say at 888 Poker Tournaments, these principles apply. Pay attention to the game itself and do your best to put aside the external distractions otherwise your game will suffer.

Now that’s all the poker advice I’m going to give as I might be running into you at a poker table some time soon.

40 Replies to “Adjusting to poker in an unfamiliar environment”