Rivalries are not born overnight.  They must be genuine and not artificially created.  The greatest historical, sports rivalries like Red Sox/Yankees, Ohio State/Michigan and Duke/North Carolina are built upon decades of competition and hatred.  Memorable victories and devastating losses.

While mutual respect exists among rivals, a healthy resentment still brews.  The players don’t like each other.  The fans despise one another.  The mere sight of an opposing team’s emblem evokes queasiness.  An Auburn fan wouldn’t be caught dead cheering for Alabama and vice versa.  Never has a friendly word been shared between Jets and Dolphins fans on Sundays between 1 and 4 pm.

That being said, even though it’s new, the Boston Red Sox and Tampa Bay Rays have developed themselves a healthy, little rivalry.  I should know.  I experienced it in person once again last night.

I was fortunate enough to land a ticket to Tuesday’s extra inning thriller from a good friend.  I also had two other groups of friends in town so I was doing triple duty traveling between their three different sections… and of course, the lounge.  I covered more ground than the peanut salesmen.  I should have suited up myself and made some extra coin.  GET YOUR ICE COLD BEER HERE!!! 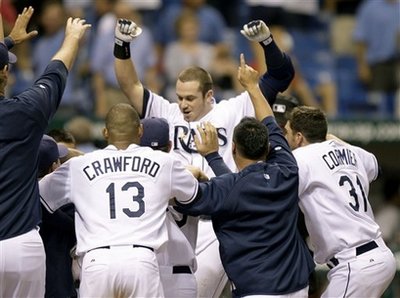 Even though the Red Sox lost, the game was well worth the price of admission, particularly since I didn’t pay for the ticket.  Although it’s cliché, the atmosphere was truly electric.  The game lasted five hours with trash-talking galore for the majority of them.  The game went 13 innings until emerging superstar Evan Longoria belted a walk-off, two-run homer to sink the Sox, giving Rays fans the last laugh.

I always contended that an upstart Tampa Bay team, only in its fifteenth year of existence, could never compete with the likes of the Red Sox, Yankees, Blue Jays and Orioles in the American League East.  Was I ever wrong?  The Sox and Yanks have money to burn and owners willing to spare no expense to put a winning product on the field.  That includes spending up to $200 million annually on payroll.  The Rays spend one-third that amount yet are again competing for a spot atop that division.

Last year, the Rays proved they were not intimidated by the big, bad Sox, knocking them out of the playoffs and advancing to the World Series.  What’s ironic is that the Sox were traditional underdogs against the Yankees.  After winning two of the last five World Series, they now play the role of Goliath to the Rays’ David.

While the Trop used to be a place for opposing fans to rule the roost, that is no longer the case.  Sox and Yanks transplants still show up in hordes when their teams are in town.  For home games against the Sox, the Trop regularly draws over 30,000 fans, about 90% capacity for the building.  But the stadium is no longer overrun with Sox fans as was once the case.

For Rays fans, beating the Red Sox isn’t like beating everyone else.  It’s much more satisfactory and that is what defines a rivalry.  If the Rays take three out of four against Kansas City, there’s cause for celebration.  If the Rays sweep a series against the Sox, clear a parade route.  Justifiably so.  These are big games and the Rays will not go quietly.

Dare I say, despite what the standings show, the Rays might be the better team. After sweeping a mid-week, two-game set, the Rays lead the season series eight games to four.  Despite rotation and bullpen inconsistencies, the Rays are twelve games over .500 and only 5 ½ games behind the Yankees.  With thirteen games remaining against Boston and New York, the Rays might just control their own destiny.

Don’t get me wrong, by no means was Tuesday night a Saturday at the Swamp, or the Horseshoe, or in Death Valley, but it was pretty rowdy.  It will only get better as the pennant races heat up with the Rays back in the thick of things.  What should concern Sox fans is that this Rays team has their number, particularly at home where they’re 5-1 against Boston this season.

Sox fans don’t hate the Rays as much as Rays fans hate the Sox, but they might want to start.  This team will not be overlooked.  If you sports fans want to experience a true, up-and-coming rivalry, purchase your tickets ahead of time for September 1-3 which is the next time Boston comes to Tampa.  It’s not quite Laker-Celtics, but it ain’t bad.

21 Replies to “Sox-Rays: A Blossoming Rivarly”