Probably the most famous lie of all time was uttered when Adam and Eve held that half-eaten apple and told the powers that be they didn’t do it.  From that single lesson, we’re taught at an early age the consequences of being dishonest.  From George Washington’s “I cannot tell a lie” to Richard Nixon’s “I am not a crook” to Bill Clinton’s “I did not have sexual relations with that woman,” our nation boasts a notable history of dishonesty and indiscretion.  If both biblical and presidential figures lie, why should we be surprised when athletes do the same?

Over the past several years, sports fans have been treated to a barrage of lies, excuses, fibs, mistruths and fabrications about who did what, when, where and how.  Based on those varied and often contradictory accounts, we are left to play both judge and jury, evaluating wherein lie the actual truth. 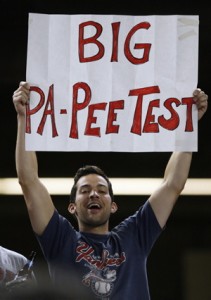 David Ortiz, the loveable Big Papi, is the most recent professional baseball player whose name surfaced on a failed drug test.  In a press conference this weekend, Ortiz apologized, telling the nation that he has never bought or used steroids but rather it was a combination of then-legal supplements and vitamins that triggered the bad test.  Are we to believe him?  Should we when so many before him have lied?

Ortiz is just another in the long line of major league baseball players to confess his ‘sins’ to the nation, coming clean only when caught.  Once sure-fire Hall of Famers Roger Clemens and Barry Bonds continue to plead their innocence with regards to accusations of performance enhancing drugs (PEDs) they allegedly ingested.  Rafael Palmeiro told a Congressional hearing he never used steroids.  Shortly thereafter, he failed a drug test.  In that same session, Mark McGwire said he wasn’t there to talk about his past and Sammy Sosa suddenly forgot how to speak English.  These players made a mockery out of a government panel that many believe had no business being involved in baseball in the first place.

Lies abound in sports.  Like a child finding out there’s no such thing as Santa Claus, this is something we’re slowly and reluctantly getting used to.  Pete Rose lied about his gambling habits for years.  Alex Rodriguez lied, then lied, then lied again about his steroid use.  The Patriots lied about filming other teams’ practices.  Michael Vick lied to the NFL Commissioner about his dog-fighting ring until finally getting caught.  Olympic gold medalist Marion Jones lied about drug use, then did her jail time.  As head coach of the Miami Dolphins, Nick Saban told us he would never be the head coach of the University of Alabama.  He’s currently the head coach of the University of Alabama.  Then there was Rosie Ruiz.  Remember her?  She was the woman who won the 1980 Boston Marathon at a record pace, until officials later found out that she had hopped a subway to complete the race.  Apparently the only person we can trust these days is Tim Tebow.

I’m not naïve enough to believe everything in sports is pure.  Heck, I lie.  Or at least I’ve been known to distort the truth on occasion.  I’ve stolen candy from the dispensers at my local supermarket without paying for it.  I’m no black pot.  I understand that a big part of being a professional athlete means learning how to market yourself properly.  Athletes have a limited window in which to make as much money as possible.  They have carefully crafted and protected their images.  One mistake can cost someone not only the support of his fans but his career and tens of millions of dollars.  Just ask Michael Vick.

We will always watch sports.  As fans, it’s in our nature.  Sport is pure.  There’s elation in a perfectly timed alley-oop, a 6-4-3 double play turned without flaw, the down-field pass to an open receiver for six, an approach shot that plants itself inches away from the pin or picking up a 7-10 split.  We marvel at the athlete who can routinely achieve what we have tried to do a million times but cannot.  We could just do without the lying.  It’s inconsistent with the purity of the game.

Unfortunately, we’ll never know the complete truth in any of these cases, well after names have already been dragged through the mud.  Who took what and where?  What did Papi, Clemens, Bonds and the like use to get an edge?  We’re left to formulate our own opinions, many of which have already been cynically predetermined about sports and the millionaire athlete.  We believe some but not others based on these preconceived notions, much of which is based on the image they themselves have created.  We forgive some but not others.

We still love our sports but we are becoming immune to the lies.  Some of us still mistakenly believe in Santa Claus.