I was sitting at a local watering hole when the gentleman beside me started going on and on about his fantasy football team.  Like I had nothing else better to do than listen to him discuss how he drafted the Redskins defense in the 7th round. 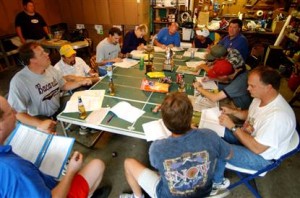 For those of you still unfamiliar with Fantasy Football… welcome to planet earth.  Sports fans, mostly men who think they are perfectly capable of running a professional sports franchise, gather once a year to draft football players at each position and field their own team.  Normally wings, beer and bad jokes are served, while guys who are too short, too slow and too uncoordinated to play the game, draft players they think will garner them enough yards, receptions and touchdowns to crown them Fantasy Football king.

Now, if this guy annoyed me, a football fan, after only a few brief minutes of hearing him talk about his third string wide receiver, it got me thinking how the wives, women and girlfriends of millions of men around the country cope with these very same conversations.

So, for those girlfriends out there who have had enough of their man’s childhood fixation with running his own rotisserie team, sportschump.net has come up with some valuable advice to help you make it through the season with a smile.

Go Shopping:  If your man zones out on Sundays, take his credit card and run to the mall for your own fantasy spree.  If he’s in a league where he gets paid out for success, tell him you were so confident in his ability to draft a winning team, that you were just celebrating his impending victory by buying yourself something nice.

Curb the Talk:  The last thing your man wants to hear is who was on Oprah this week.  Similarly, the last thing you want to hear is how many points Adrian Peterson earned him in Week Five.  Make sure he understands there’s a time and a place for such talk, and that’s away from you and with his friends. 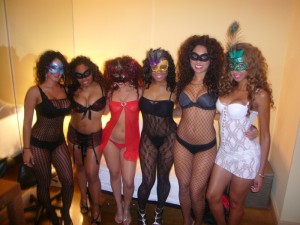 Host Your Own Fantasy Party:  When your man gathers with his friends to argue whether Peyton or Eli Manning brings greater value, get your girls together for a sex toy or lingerie party.  Remind him that he’s not invited.  It’ll distract him from his football by wondering what you and your twelve hottest friends could possibly be doing with lace, lotion and a handful of batteries.  Now tell me which fantasy he’d rather be involved in.

The Player Cuteness Factor:  Careful with this technique for it could send your man into a jealous frenzy.  If he drafted Tom Brady or Reggie Bush, sit there with him as he’s checking their stats and tell him how cute the players look in their tight uniforms.  Again, this might warrant anger or even worse a hidden man-crush, so use this method only if you’re prepared for the consequences.

Walk Around Naked: If this tried and true technique doesn’t distract your man away his fantasy team, then it’s time to find a new man for his priorities are clearly out of whack.  Yes, ladies, football is important to us, but remind your man to keep things in perspective.  If skimpy lingerie isn’t more titillating than a Brett Favre six touchdown game, then it might be time to check your man into fantasy football rehab.

If You Can’t Beat ‘Em, Join ‘Em: Plenty of women have now joined fantasy football leagues.  However, if you’re not a football fan, grab some friends and create a fantasy league of your own.  Base it on Dancing with the Stars, Desperate Housewives or Sex and the City reruns (Be sure to get a big TV; find a good deal or sale, because that’s what we girls do best!). Host a draft party and invite your friends over for wine and cheese.  Be sure to belch repeatedly for effect if your man happens to be in attendance.  You can allot league points for how many times the Housewives bag either a lawn boy, neighbor or someone else’s husband.  Or better yet, join his fantasy league and beat the tar out of him and his friends.  Then talk smack about how little he knows about sports.