Woe is the Buccaneers fan.

Let me preface this by saying I love the Bucs.  They’re my NFL team and always will be.  I’m not looking to switch allegiances and I never will. 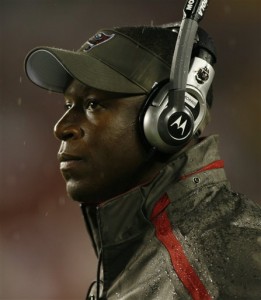 But the 2009 Buccaneers are in trouble.  While other NFL teams are already executing their game plan with near playoff-like precision, the Bucs are still miles away from establishing any sort of identity.  Heading into the regular season, Tampa Bay’s coaching staff is no closer to answering crucial questions than it was four preseason games ago.

They start quarterback Byron Leftwich who’s already been cut from several NFL rosters.  Byron’s own family wouldn’t start him on their fantasy team.  Citing directional differences, the Bucs fired their offensive coordinator, Jeff Jagodzinksi, days before the start of the season.  They have no clear cut, number one running back.  They have no go to wide receiver.  In the off-season, they lost one of the greatest defensive minds in football.  They’ve had off-the-field, personnel issues.  And their schedule is brutal.  They play the NFC East this year, one of the toughest divisions in football, meaning before they even play a team in their own division, they will face Washington, Dallas, Philadelphia and the New York Giants who are all Super Bowl contenders.

In the preseason, Tampa Bay went 1-3.  The only team they beat, by a single point, was the Jacksonville Jaguars, and their coach, Jack Del Rio, might not make it through the season.  While the preseason is not always the best indication of how a team will fare in the regular season, disturbing trends have emerged.

Although their rush defense led the preseason in yards allowed, that won’t matter much if the Bucs a) consistently turn the ball over on offense  b) can’t move the football or  c) allow big plays in the passing game.  Those are momentum killers that the unorganized, Buccaneer offense will likely be unable to counter. 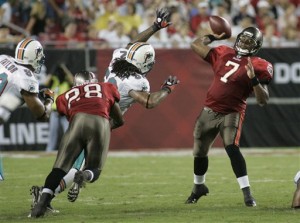 The offense ranked 21st in the preseason in yards per game and 22nd in points scored.  The reason the Bucs melted down last year was because they were unable to move the football.  This season doesn’t look like it will be any different.

Las Vegas lists the Buccaneer over/under for wins this season at six.  Only the Lions, Rams, Raiders, Chiefs and Lions are slotted lower and those teams are god-awful.  Aside from playing the NFC East and division rivals, New Orleans, Carolina and Atlanta twice, the Bucs also have to play Green Bay and the Jets at home, Buffalo, Miami and Seattle on the road, and the New England Patriots in Europe.  If you can find six wins on that schedule, you were probably the kid who always found that last, strategically hidden Easter egg.  Happy hunting!

Look, I am trying to be optimistic and I’m willing to be patient.  Rome wasn’t built in a day.  I support the new regime, its efforts to put a winning product on the field and the renewed emphasis on community.  I will still root for the team unabashedly.  If I don’t frequent Raymond James, I will still watch every game and cheer loudly.  But realistically, I fail to see how winning now is even a remote possibility.  The preseason doesn’t always tell us much about a football team but in this case, mediocrity appears evident.  Heck, mediocrity might even be wishful thinking.

20 Replies to “Want a sure thing? Take the Bucs under.”