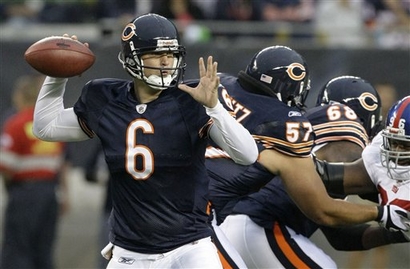 FILE – In this Aug. 22, 2009 file photo, Chicago Bears quarterback Jay Cutler fires a pass during an NFL football game against the New York Giants in Chicago. After all the hype and hoopla surrounding his arrival in Chicago, the Pro Bowl quarterback is ready for the Bears’ opener against the Green Bay Packers, Sunday, Sept. 13 in Green Bay after an offseason that seemed like a blur. (AP Photo/Charles Rex Arbogast, File)