Other than the occasional Family Guy rerun, my television rarely strays from ESPN.  While watching Sportscenter the other night, I happened upon some Yankees highlights and had a most interesting revelation. 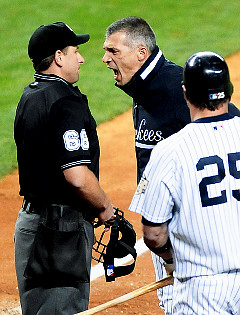 After a called third strike to Alex Rodriguez that appeared just off the plate, Yankee manager Joe Girardi rushed out of the dugout to argue the call.  After some healthy debating back and forth and likely a few testaments as to the others’ uselessness, the umpire didn’t like something Girardi said and immediately tossed him from the game.  That just angered Girardi further.  He channeled his best Billy Martin, taking off his cap and slamming it to the ground.  He started screaming at the top of his lungs, going nose to nose with the ump, until he eventually had to be restrained.

Last night, Dave Trembley, manager of the Baltimore Orioles, did nearly the same thing.  Trembley and an umpire went face to face, spit globule to spit globule.  And all this time we thought umpires wore face masks to protect them from tipped foul balls.

This got me thinking.  Where else other than Congress, the MTV Video Music awards and the US Open can we witness human beings lose their composure in such fashion?  While Joe Wilson, Kanye West and Serena Williams were all lambasted for their outbursts, and rightfully so, baseball managers are almost encouraged to confront umpires.  There are no repercussions for their actions; the sport turns a blind eye.  Just like fighting in hockey, mismanaged meltdowns are accepted as part of the game.

This doesn’t happen in any other sport.  Football coaches might speak their mind or even heckle a referee mid-game but you never see a coach get in a referee’s face.  Basketball coaches rarely confront a ref in person.  They just wait for the post-game press conference to question the officiating and then suffer the impending fine from Commissioner Stern.  Bobby Knight was best known for his tirades but he’s long since gone and his behavior was hardly tolerated.  On the other hand, baseball managers arguing until they turn beet red is as commonplace as overpriced beer at the ballpark. 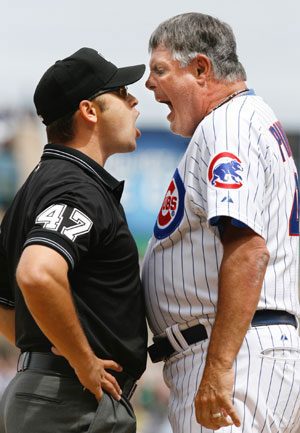 Forget about sports for a minute.  This doesn’t happen in any other walk of life either.  Let’s say you work at a bank, an insurance firm or a manufacturing plant.  Can you imagine getting in your supervisor’s face, blowing up to the point where you both hurl profanities at one another?  You’d be visiting the unemployment line quicker than a Nolan Ryan fastball.  We might disagree with people but we never go toe to toe with a supermarket cashier or the maitre d’ of a restaurant.  For the most part, we are a civil society.

But baseball exists in a vacuum.  What happens on the diamond stays on the diamond.  Managers are rarely fined for these altercations.  Don’t get me wrong.  Baseball would be even less exciting to watch if it weren’t for these occasional, manager-umpire blowouts.  It’s good entertainment and an integral part of baseball culture. 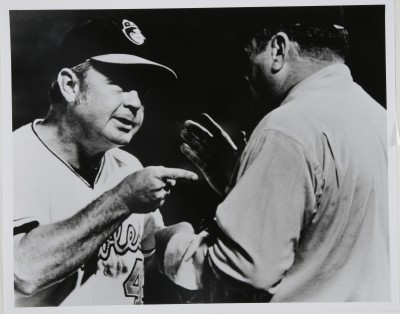 Few could argue a call with the flair of Billy Martin, Earl Weaver and Lou Pinella but even Pinella, who now coaches the Chicago Cubs, has cooled his jets.  His cardiologist probably thanks him.

As fans, we actually miss those performances, classic arias of spit and ire.  We yearn to see the manager and umpire clash, like a car wreck we can’t turn our eyes from, but we don’t question its logic.

Of course, players and managers are not allowed to lay a finger on an official.  That would warrant suspension.  But shouting, profanities and the occasional saliva shower are perfectly acceptable.  Without them, baseball just wouldn’t be the same.