The road trip to Gainesville had been planned for months. 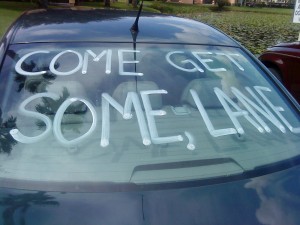 Just as both Florida and Tennessee had earmarked September 19 on their calendar, my friends and I had done so as well.  Although we didn’t have Lane Kiffin’s off-season comments posted as bulletin board material, some of us did have our own personal message for the Vols’ head coach displayed for all to see.

After an all-night poker session at Mr. C’s Lake City palace on the eve of the big game, the Saturday sun came early for us vampires.  After freshening up, we threw on our sunglasses and hit 75 South to Gainesville. 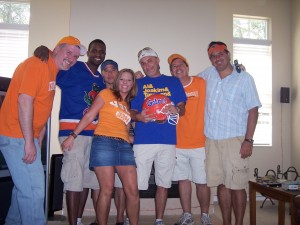 Among us poker junkies and rabid college football fans were the usual cast of characters: Mr. C, Steve McQueen, George the Chain, Brotha E, Daddy Raoul, Mary Mary and newly single Volunteer Eric.  Mr. C. is a great friend and has been for years.  He also happens to be a Tennessee grad.  For years, he and I have watched the SEC opener together.  He’s always gracious in defeat and fortunately for us Gator fans, that’s all he’s known since Urban Meyer came aboard.

Mary Mary and newly single Eric were high school friends of Mr. C and also hardcore Volunteer fans.  We were a motley crew of both rabid Gator and Vol fans, one group louder than the other.  As you might imagine, the trash talk was relentless.

We chose not to be part of the record crowd of 90,894 that occupied the Swamp that day, opting for the dusky, smoke-filled and booze-soaked confines of the dive bar formerly known as the Purple Porpoise.  It’s the kind of place where you do NOT wear your best, game day outfit for fear of what might get spilled on it.  On home Saturdays, the place is abound with unruly fans and a scantily clad wait staff… the only way to fly.

We camped out in our usual spot, huddled around our table top, pacing in front of the same big screens where we saw the Gators knock off Jamarcus Russell and LSU 23-10 in 2006, and lose to Ole Miss 31-30 in 2008.  Amazingly, they still let us in the place. 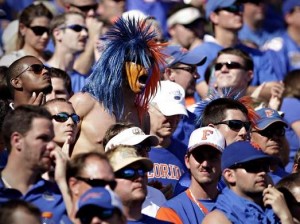 Now… when one of your best friends is a fan of your fiercest rival and you go to one of the rowdiest, bars in Gainesville on game day, you always worry that some drunken fan will do something inappropriate.  But for the most part, Gator fans were quite cordial.  Prior to contrary belief, sportsmanship is not out of fashion.  There were more fans who approached my three Vols to wish them luck or congratulate them on a game well played, than there were belligerent guys who shouted “Go Gators!” in their face.  Although there was plenty of that too.  One Gator fan blamed Mr. C for Kiffin’s comments, as if Mr. C had a private, orange bat phone piped directly into Lane’s office.

There were plenty of questions leading up to this game.  Could the Gators cover the massive 30-point spread against their conference rival?  Could my crew remain standing for the entire game after a long night of poker abuse?  Could Lane Kiffin’s playmakers and play calling back up his boldness?  How would the addition of defensive guru Monte Kiffin affect Florida’s offensive game plan?  What kind of impact would defensive superstar Eric Berry have on the game?  Could Florida’s offensive line create enough space for its lightning quick running backs?  Could Tim Tebow and company extend their school record to thirteen straight wins or would Tennessee somehow upend the defending national champions?

Brandon James set the tone at the opening kickoff with a 50-yard return.  Florida later kept that initial drive alive with a gutsy 4th-and-2 Tebow keeper up the middle.  Florida settled for a field goal despite the solid starting field position. 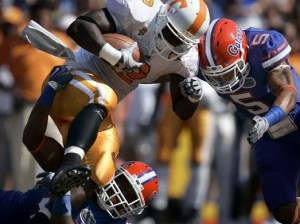 The Volunteers responded with an impressive, eight-minute drive that also ended in three points.  Tennessee called 13 of 14 running plays on that opening drive.  It appeared obvious they wanted to control the clock and keep the ball out of Tim Tebow’s hands.  It would be up to Florida’s defense to stop them.

Eventually, Florida got the ball back and responded with a Tebow rushing touchdown, putting him only three behind all-time conference leader Herschel Walker.  Not bad company to be in.

The rest of the game went on like a heavyweight bout, with both SEC powers taking each others best body blows, knowing all the while only one team would remain standing… kind of like us in the bar.

Florida led 13-6 at halftime, then owned the clock, and the scoreboard, in the third quarter.  They scored ten points and moved the ball effectively.  The Volunteers finally looked as if they were starting to wear down.  After Florida went up 23-6 and forced another unsuccessful Tennessee drive, the Gators looked like they might be on their way to covering that 30-point spread.  In the fourth quarter, they marched downfield with relative ease until Tim Tebow fumbled the ball on the three yard line, giving Tennessee a new lease on life.  After a Montario Hardesty touchdown, a game that could easily have been 30-6 quickly became 23-13. 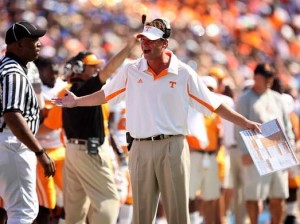 In the end, Tennessee didn’t have enough.  Florida took what Monte Kiffin gave them.  The Gators didn’t attempt a deep pass all game, keeping a pretty conservative game plan.  Whether that’s because Kiffin’s zone prevented them from doing so or because Meyer and Addazio drew it up that way, only the coaching staff knows for sure.  The Gators did enough to win and that was cause for celebration for those of us wearing orange and blue.

Gator fans breathed a sigh of relief and Vol fans, although disappointed, knew they gave Florida a good fight, much better than anyone expected.

We continued on into the night until the emotion of the game and the haze from the liquor wore off… for some of us.  We all said goodbye that next morning and drove off in our different directions, which included Tampa, Jacksonville, Atlanta, Chicago, Tallahassee and Knoxville, knowing that we would do it all again next year.

The date is once again circled on our calendar.  We wouldn’t have it any other way.

36 thoughts on “Just another Florida-Tennessee weekend”