This week in college and professional football might finally shed some light on who’s good and who’s not, putting some distance between the contenders and the pretenders.  Below are some of the games you should be watching… 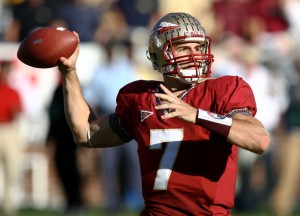 Once upon a time, three mighty giants ruled the sunshine state.  Their names were Miami, Florida and Florida State.  These three football powers accounted for 10 national championships in 26 years.  It was nearly impossible for any smaller state schools to compete with these programs, both on the field and on the recruiting trail.  But that’s exactly what the University of South Florida is trying to do.  They’ll get their chance this weekend as they travel to Tallahassee to take on the Seminoles.  FSU is coming off an emotional road win over 7th ranked BYU and looking to get their program back to national prominence.  So is USF, who suffered an unfortunate setback when they lost senior quarterback Matt Grothe for the season to a torn left ACL last week.  Grothe, who was well on his way to another successful season, will be replaced by freshman B.J. Daniels who hails from, you guessed it… Tallahassee.  Don’t expect the Seminoles to throw him a welcome home party.

Revenge is a dish best served Nittany.  The Iowa Hawkeyes spoiled Penn State’s run at a national championship last year by stunning them 24-23 in Iowa City.  Joe Paterno’s Penn State Nittany Lions will try to keep their 2009 hopes alive in this conference opener for both teams.  Iowa is on a seven-game winning streak but will have to play in front off 110,000 angry fans who are still bitter over last year’s defeat.  Neither team has yet to be challenged this year, beating their six opponents by a combined 113 points.  With Ohio State’s loss to USC who then lost to Washington, Penn State may not only need an undefeated season, but also some style points in these Big Ten conference games to get a BCS title shot. 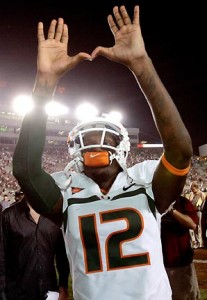 Is the ‘U’ back?  Their fans will find out at about 7pm on Saturday night.  Sophomore quarterback Jacory Harris is the darling of Coral Gables and has brought Miami back into the top ten where the school resided for years.  Harris, who has completed 70% of his passes this season, has already beaten Florida State and Georgia Tech, but winning in Blacksburg is an entirely different animal.  Virginia Tech is the third consecutive ranked opponent for Miami.  The Hokies have already lost a game, their season opener to Alabama, but will still look to stifle the Canes’ newfound success.  The leader will have a leg up in the ACC’s Coastal division but will still be looking up at UNC. 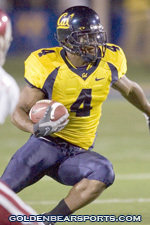 What’s to make of the Pac-10 this year?  Washington ranks atop the standings while the USC Trojans are at the bottom, but that’s only after one conference game.  The Cal-Oregon matchup will go a long way in providing some West Coast clarity.  Cal comes in confident and undefeated at 3-0, while Duck fans aren’t quite sure yet how good their team really is.  One thing they do know is that they’re battle tested, having already played Boise State, Purdue and Utah.  If they want to knock off sixth-ranked Cal, they’ll have to come up with an answer for junior running back and early Heisman candidate Jahvid Best.  Best has already rushed for eight touchdowns this season, including five last week against the hapless Minnesota Golden Gophers.  He’s averaging 7.8 yards per carry.  But Cal is not one-dimensional.  Quarterback Kevin Riley has also been lights out.  Oregon is also coming off a high, ending Utah’s 16-game winning streak last week, but the Utes don’t have the rushing attack of the California Golden Bears.

Will the real Tennessee Titans please stand up?  The team that gave the Pittsburgh Steelers all they wanted on opening night, lost at home to the Houston Texans the very next week.  Starting off 0-3 in the NFL is generally a death knell for any team hoping to make the post-season.  The New York Jets on the other hand appear to be for real.  They are undefeated and coming off an emotional victory over the New England Patriots.  The Jets defense has only allowed 16 points in two games while the Titans have allowed three times that amount.  Could they really miss Albert Haynesworth that much?   Another Titans loss could have fans clamoring for the return of Vince Young.  Meanwhile, rookie head coach Rex Ryan and rookie quarterback Mark Sanchez have Jets fans believing they’re not the only playoff team in New Jersey, er…. New York.

Might we be witnessing a changing in the guard of the NFL?  Matt Ryan marrying a supermodel might just seal the deal.  The only thing more difficult than playing New England in Foxboro is playing New England in Foxboro in December.  The Falcons get a break playing there early in the season but they’ll be facing a New England team still stewing over last week’s division loss to the Jets.  The Pats will look to rebound against an NFC team that is slowly proving they’re no one-hit wonder.  Veteran tight end Tony Gonzalez, who has already caught two touchdown passes, joins an already potent Falcon attack with Matt Ryan and Michael Turner.  While the Patriots look to return to championship form, an Atlanta victory in Massachusetts might symbolize a passing of the torch.