If you thought last weekend featured the only big-time tussle in the bayou, think again. While this weekend’s college slate might at first glance pale in comparison to Florida-LSU, don’t be fooled. Three of the top-five teams in the nation square off against ranked opponents. If they’re not careful, they can easily be knocked from their perch. While the NFL powers-that-be separate themselves from the dregs of the league, two unbeatens go head-to-head in yet another bayou battle for supremacy. 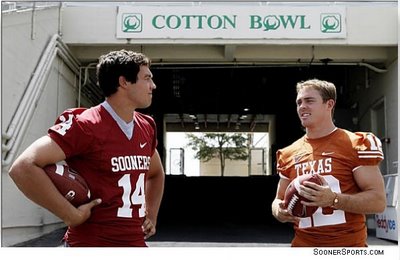 After one bum shoulder and two Sooner losses, the Red River rivalry might not hold the anticipation it was supposed to at season’s beginning, but don’t tell that to the school’s alum. With losses to Miami and BYU, any Oklahoma hopes of returning to the BCS title game are pretty much out the window, but they can still win their conference and dehorn Texas whose championship hopes are alive and well. On the other hand, an undefeated season would earn Texas a first class ticket to Los Angeles in January. Texas won this matchup last year, but lost to Michael Crabtree and Texas Tech, denying them a title shot and opening the door back up for Oklahoma. Even though Bradford and Colt McCoy are the best of friends, the revenge factor in this game is big. Expect nothing but fierce competition and quality quarterback play at high noon on Saturday. 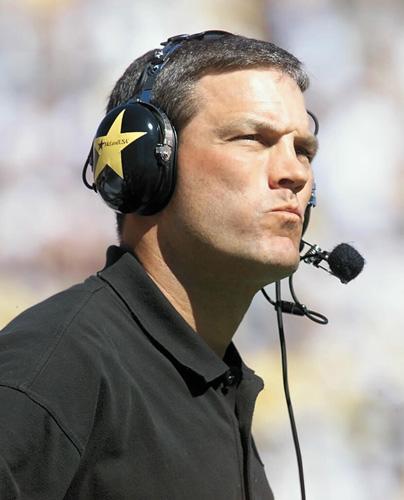 Iowa is the only undefeated team remaining in the Big Ten. They’ve even beaten Penn State in Happy Valley. Yet they’re still inexplicably ranked eleventh in the nation behind Ohio State, LSU and Miami who all have one loss. No wonder people complain about college football polls. We’ll find out Saturday whether they’re appropriately ranked as they travel to Camp Randall Stadium to face the Badgers, who lost to Ohio State last week, 31-13. A win will give the Hawkeyes a stranglehold on the Big Ten until their November 14 matchup against Ohio State. A loss will mean the pollsters were right about Iowa all along. 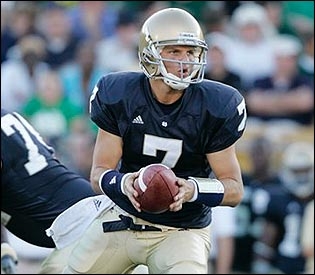 The annual rivalry between two of the most storied college football programs has been a bit one-sided lately. The Irish haven’t beaten USC in seven tries. In those seven games, USC hasn’t scored less than 34 points! In their last two games, Notre Dame hasn’t even scored a touchdown. Most feel if Notre Dame has a chance of ending that streak, this would be the year. They’re playing in South Bend and Notre Dame QB Jimmy Clausen remains a fixture atop most Heisman watch lists. He’s the nation’s most efficient passer. But on Saturday, he’ll be going up against the nation’s most efficient pass rush. Not only might a win help Clausen become the first Domer to win the award since Tim Brown, it would likely sink any chances USC has at a national title. Big East, Big Ten and at-large conferences should be watching this game intently as a USC loss may very well knock the Pac-10 out of the national championship conversation. 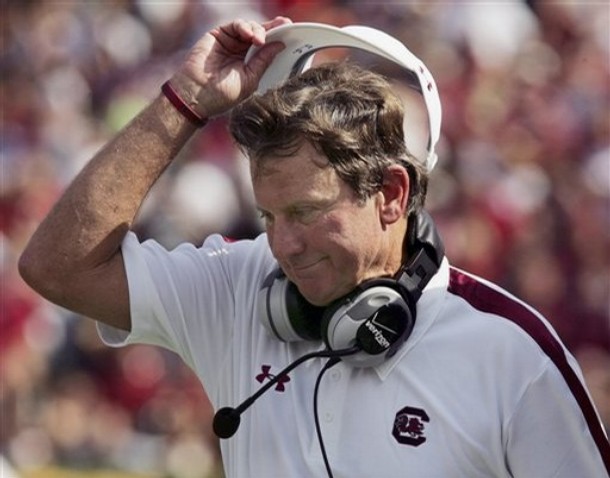 Can anyone stem the tide this year? The visor will give it his best shot Saturday evening. Alabama continues to amass victory after impressive victory, edging ever so closer to #1 Florida each week. Alabama has already beaten two ranked teams this season. They look to add a third notch to their bedpost as they host South Carolina Saturday afternoon in Tuscaloosa. Despite a lengthy history against the Tide while wearing orange and blue, this will be the first time Steve Spurrier has faced ‘Bama as head coach of the Gamecocks. Earlier this season, South Carolina recorded only its second victory against a top five team in school history by beating Ole Miss. They’ll get another chance this weekend a little sooner than they would have liked.

Three weeks ago, Ray Lewis and the Baltimore Ravens were undefeated and looking like they were the cream of the AFC crop. Quoth the Ravens nevermore as this week, they’re on the verge of losing their third straight. Behind Brett Favre, Adrian Peterson and Jared Allen, the Vikings look like serious Super Bowl contenders. 3-3 doesn’t necessarily mean the Ravens are out of contention but it will put them another game behind conference rivals Pittsburgh and Cincinnati and one game closer to the cellar-dwelling Browns. 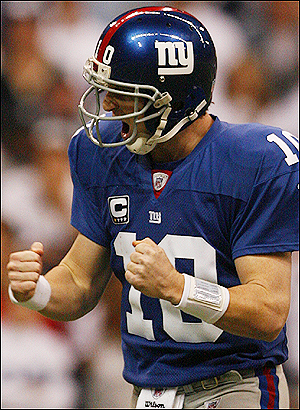 Will the best team in the NFC please stand up? We’re about to find out who that is on Sunday. The Saints and Giants are ranked first and second in the league in scoring differential. In layman’s terms, that means both teams have been consistently beating the tar out of their opponents. Eli Manning’s health (plantar fasciitis) is still a concern. As should be the fact that he’s never played a game in the Superdome despite his father’s many years of success in that same building. The over/under (total points scored) for this game is 47 is the highest of any game this week which means Las Vegas expects a shootout.