I recently wrote a ‘five overrated movies’ post that garnered a fair amount of attention. I prefaced the piece by stating that film is largely a matter of personal preference and I was just sharing my opinion. I received so much response, both positive and negative, that many suggested a follow-up article. So, at the risk of offending even more readers, here goes….

I love women. And I love film. But far too often in movies, the role of the villain is written specifically for the male. When given the opportunity, however, some women have embraced the villainous role and ran with it, giving us chilling performances that have often defined their careers.

After watching Saturday Night Fever the other night, I was reminded how much I couldn’t stand Stephanie Modano, brilliantly portrayed by one-hit wonder Karen Lynn Gorney. Throughout the movie, Modano belittled John Travolta, transmitting the abuse she received from others all day directly onto him. I squirmed every time she was on screen. Travolta was no saint, but he certainly didn’t deserve her hatefulness.

That got me thinking about the most detested female characters in film, because for me, she definitely ranks. Accordingly, here’s a list of eight women who instilled us with everlasting images that left us with a sheer hatred, if not fear, for their characters. Where do they rank on your list? 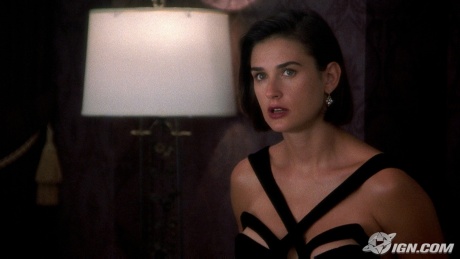 Famous Quote: “The dress is for sale. I’m not.”

I know what you’re going to say. This one’s on Woody Harrelson. He’s the one who ultimately allowed, if not encouraged, his wife to sleep with Robert Redford. He could have nixed that offer in a heartbeat or simply knocked Redford’s block off as soon as it was suggested. But he didn’t and he ultimately paid the price. The movie asked whether a couple’s self-respect and marital vows could be bought. The scene in which Harrelson shouted from the rooftop, begging his wife to return as Moore and Redford flew off in his helicopter, made even the least jealous man cringe. Despite trying to put the events of that evening behind them, in the end Moore lost respect for Harrelson and ended up with Redford. While Moore may not have been entirely in the wrong in this film, she was still contemptible, torn between two lovers and ultimately ending up with neither. 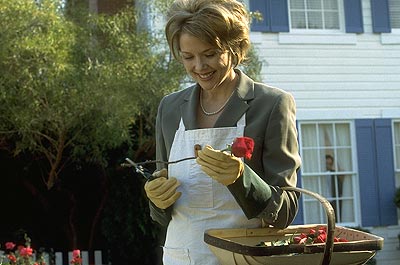 Famous Quote: “In order to be successful, one must portray an image of success at all times.”

Her pruning shears matched her gardening clogs. She was caught in an unloving, unfeeling marriage, much of which she created. Her primary concerns were her image and her career, showing no affection for either her daughter or her husband. When Kevin Spacey tried to rediscover the passion in their marriage, she was more concerned with his spilling beer on the sofa. Benning’s performance in this Sam Mendes drama typified the superficialities of a suburban housewife whose personal interests superseded those of her family. Benning ended up having an affair with the local real estate mogul and got caught red-handed by her husband at a fast food drive-thru. At the end of the movie, when her husband was killed, we’re actually led to believe that she could have been a suspect. In 2000, Benning was nominated for an Academy Award for her performance but lost out to Hilary Swank in Boys Don’t Cry. 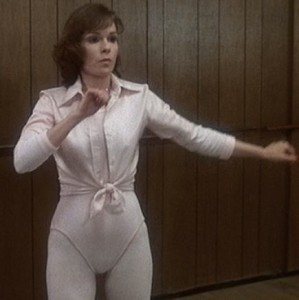 Famous Quote: “You’re a cliché. You’re nowhere on your way to no place.”

In this 1970s classic, Gorney played an older woman who John Travolta fell in love with for her looks and moves on the dance floor. To Tony Manero, she represented a step up, a woman different from the riffraff he was used to seeing. Travolta, the king of the local disco pursued Modano and they ultimately became dance partners but nothing more. Throughout the film, Modano reminded him of his pecking order in society which in actuality was no better than her own. 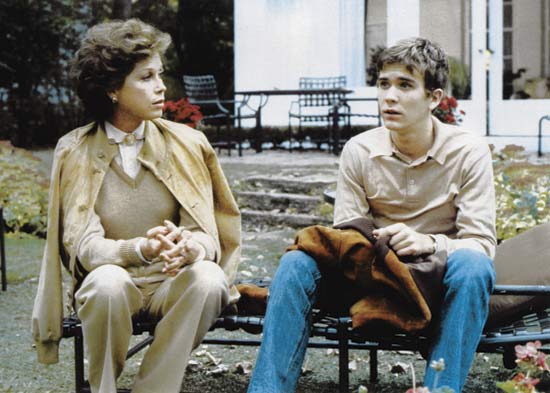 Famous Quote: “Hate him? How could I hate him? Mothers don’t hate their sons.”

Let me preface this by saying I was raised on Mary Tyler Moore. In the 1970s, her sitcom was a mainstay in our household. Yet after watching Ordinary People, I never looked at her the same way again. In this film, Moore played a distressed mother who could never get over the death of her oldest son, who drowned in a boating accident. Her younger son, played by Timothy Hutton, survived the accident and she resented him for it. Hutton underwent therapy and repeatedly struggled for a love and forgiveness that his mother was unwilling to give. In the end, Moore proved unable to deal with the passing of her eldest son, refusing to embrace Hutton for fear of loving another family member she might lose. Ordinary People won four Academy Awards in 1981 including Best Director (Robert Redford) and Best Picture. Hutton also won an Academy Award for his portrayal of the conflicted son. Moore was nominated but lost to Sissy Spacek who won for Coal Miner’s Daughter. 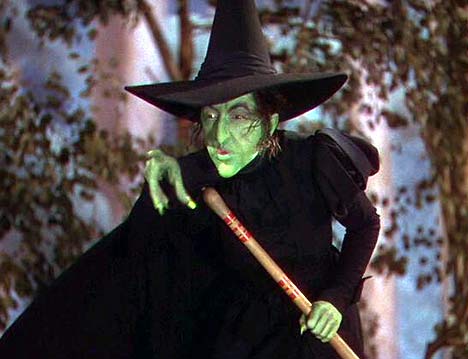 Character: Wicked Witch of the West

Famous Quote: “I’ll get you, my pretty, and your little dog too.”

Hamilton may have set the standard by which all evil women in film are judged, very possibly portraying the most hated and frightening woman of all-time. To this day, people who grew up with this classic still have nightmares from her performance. The Wizard of Oz has become a family holiday classic and probably would have won the Academy Award for Best Picture in 1940 had it not been for Gone with the Wind which was released the same year. Seventy years later, Hamilton’s makeup, cackle and overall performance is unforgettable, playing the witch by which all other witches in film and costumes are still measured. 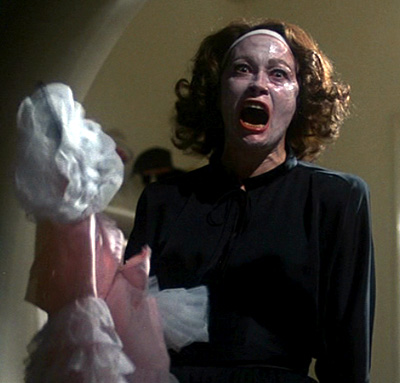 Famous Quote: “No wire hangers, ever!”

In this controversial film inspired by the memoirs of Crawford’s adopted daughter, Dunaway portrayed an abusive mother and alcoholic actress in frightening fashion. Mommie Dearest was one of the first, Hollywood tell-all books to shed light into the personal life of an unstable and troubled woman. Regardless of how much of the film was actually true, Dunaway’s performance was as eerie as any female in cinema. Obsessed with cleanliness and appearance, Dunaway abused her daughter both physically and psychologically. Her demeanor and fixation facial moisturizer were enough to make any child feel grateful they weren’t raised in that household. 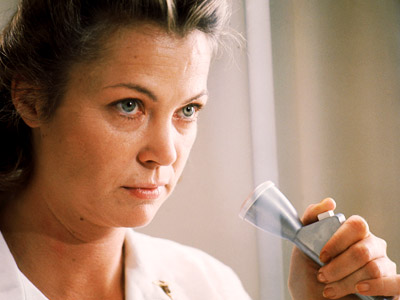 Famous Quote: “If Mr. McMurphy doesn’t want to take his medication orally, I’m sure we can arrange that he can have it some other way. But I don’t think that he would like it.”

Cuckoo’s Nest won five academy awards in 1976 including Best Picture, Best Actor and of course, Best Actress in a Leading Role for Louise Fletcher. Her hair neatly pulled back under her nurse’s cap, her face and demeanor inspired hatred and resentment. When Jack Nicholson first entered the asylum, she was quick to combat his efforts to challenge her reign. These two developed an on-screen tension that stands up to this day. Fletcher’s character was meant to signify the apathy and corruption of authority in Ken Kesey’s novel and she nailed it to a tee. Louise Fletcher has been in countless other films but it was her performance as the stoic, controlling Nurse Ratched in Cuckoo’s Nest for which she will always be remembered. 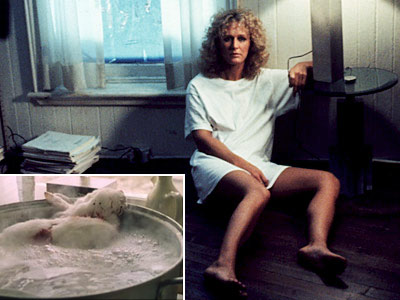 Who hasn’t seen this movie? Close’s performance is so frightening, men wince at the mere sight of a promo. In Fatal Attraction, Michael Douglas played a husband who is happily married to Anne Archer. Yet Douglas found a quality in Close that he could not find in his wife and ended up breaking his wedding vows. He routinely had sex with Close in her loft apartment up until the moment he started having second thoughts. He tried to end things with Close who insisted on more. The unstable, insatiable Close kidnapped Douglas’ daughter, pretending to be his wife for a day. She even boiled the family bunny. Close finally ended up getting shot by Archer, but not before she gave everyone in the film, and the audience, quite a scare. Close’s performance was so jarring, that even after twenty years, it’s hard to picture her as anything other than the psychotic Alex Forrest. She was nominated for best actress in 1988 but lost to Cher in Moonstruck. Close may have saved countless marriages over the years as thousands of men have probably thought twice about being unfaithful after seeing this film. Fellas, if you’ve ever thought about cheating on your wife or partner, plug Fatal Attraction into the DVD. She’ll make you think twice.

30 Replies to “The most hated women in film: A top eight list”