As my friends continue to prove unable to handle their liquor, this hopes to become a series of helpful hints and amusing anecdotes which the more experienced party-goers can use to ridicule their friends who ill-advisedly drink beyond their means.  It also sets up for some pretty good photography. Here’s hoping they’ll still hang out with me.

A while back at our weekly poker game, one of our regulars decided to partake in a little Smirnoff 100.  For those of you who haven’t ever had the misfortune of drinking this godforsaken beverage, Smirnoff 100 is just like regular vodka… except stronger.  It is 100 proof rather than 80 proof, hence the name.  Making it 20, carry the two, 10% more alcohol.  I was told there would be no math.

At the beginning of the evening, I distinctly told my colleague to go easy drinking that stuff as it would surely catch up with him.  And it did.

I do believe he was mixing it with some fresh-squeezed Florida grapefruit, which happened to be in season at the time.  Far be it from me to count how many he had but let’s just say it was enough to put him under the bus, off of the poker table, and officially down for the count.

Shortly after midnight, our hero slyly, and rather professionally I must admit, made his way outdoors to relieve himself in oral, projectile fashion.  The guy’s a trooper.  He even made it back, mistakenly, to the poker table for another quick match. 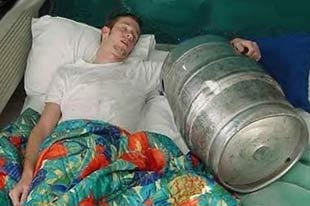 After being removed from his chips rather swiftly, he decided to pass out in his car, and yes, Sports Chump and his comrades were responsible enough to hijack his keys to ensure he made no attempt to drive.  Once our poker match winded down, we decided to go check on our boy, who we found passed out, oblivious, in the front seat of his Isuzu.  The host of the party and occasional golfing buddy, JD, then had a brilliant idea.

As it was 2 am and pitch dark outside, JD mentioned we should throw some moving van slipcovers over his car to block out all the light.  JD had about four or five in his garage, just enough to completely cover all the vehicle’s windows. 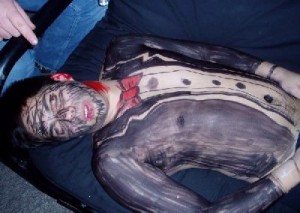 When our friend finally awoke at about six in the morning, it was to 40 degree temperature, in a blacked out SUV.  He was totally, hysterically and frigidly unaware of his surroundings.  That morning, after speaking with him, he mentioned he had no idea where he was and thought he had driven himself into a ditch.  Good times.

So heed this party lesson.  Anyone can just write magic marker on their friends when they pass out but when graced with this rare opportunity, do your best to SAFELY make the experience memorable for everyone involved.  Think outside the box and be sure to report back for the next episode of Pranks to Play on Passed Out Friends.

As always, suggestions are welcome.

31 thoughts on “Pranks to play on passed out friends, Vol. 1: The slipcover”