I’m a sports snob. I strongly believe there’s only a handful of truly great sports movies. It’s just too difficult for filmmakers to recreate the drama that takes place on the field. So when the Creative Loafers asked me to review The Blind Side, a sports movie I would never see, starring an actress I really don’t like, I was skeptical. But they promised me Jujubees, so I agreed to attend the premiere.

I fell into my comfy leather chair at the Cobb Theater Cinebistro in Wesley Chapel, fully expecting to pan everything about the movie. Then a strange thing happened. The film turned out to be pretty good. 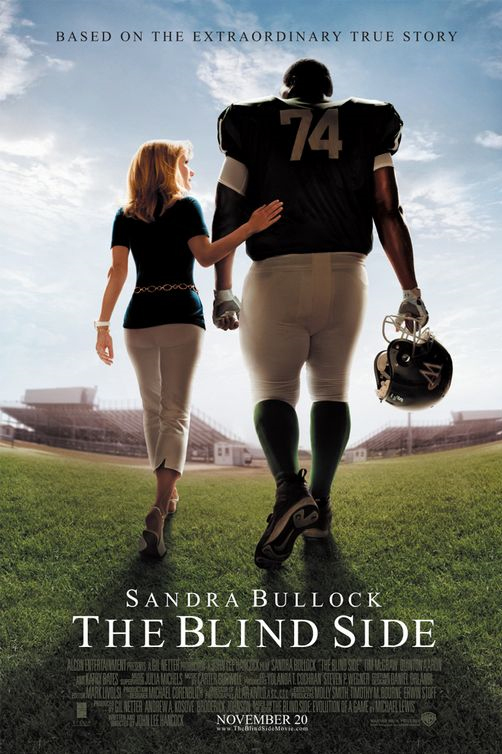 Blind Side is adapted from Michael Lewis’ novel of the same name. Just like the book, the film begins with a narrative of the game in which Lawrence Taylor broke Joe Theismann’s leg. According to Lewis, that hit more than any other moment in football history, heightened the need for a strong, left tackle to protect the quarterback’s blind side.

Oher (Quinton Aaron) is an oversized, high school kid from Memphis’ inner city with no academic records and a crack addict for a mother. He is accepted into a local Christian high school when the football coach recognizes his potential.

Early scenes at Wingate Christian High School depict Oher as uncomfortable and intimidated in his new, mostly white surroundings. One teacher describes him as ‘a fly in the milk.’ Oher never says much, most of his expressions portrayed through mopey, facial gestures. Aaron’s performance isn’t groundbreaking, unless of course Oher didn’t say much in real life. If that’s the case, his performance is dead on. 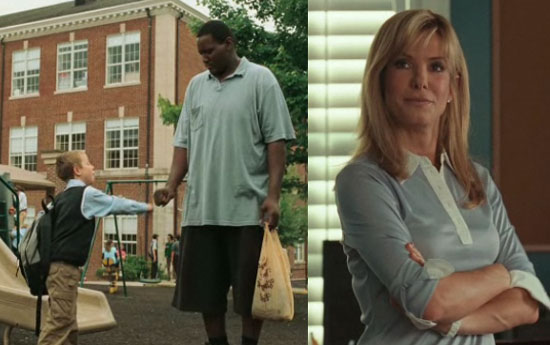 After their youngest son (Jae Head) befriends Oher, Leigh Anne and Sean Tuohy (Sandra Bullock and Tim McGraw), stumble upon Oher one afternoon roaming the streets, avoiding return to his crime-ridden projects. They welcome him into their home to sleep on their sofa for a night, which becomes a week, which ultimately becomes a legal adoption.

Despite Oher’s poor grades, school administrators find that he excels in one capacity. He scores a 98% in protective instincts on a high school aptitude test.

The Tuohy’s, a well-to-do, Southern Republican family with a strong allegiance to Ole Miss, hire a private tutor (Kathy Bates) to help Oher with his academic troubles. Once getting good enough grades to make the football team, Oher has trouble adjusting to the brutality of the sport. It’s not until Bullock compares protecting his quarterback to the affection he feels for his new family that Oher finally understands his purpose on the field. 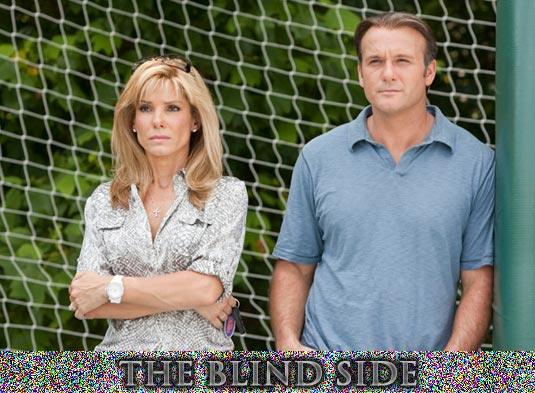 The word gets out about Oher eventually when a top scout is sent a DVD of his skills. Suddenly, major college coaches flock to recruit him. Sports fans will enjoy cameos from Nick Saban, Tommy Tuberville, Phillip Fulmer, Lou Holtz and Houston Nutt, although LSU fans will cringe seeing Saban wearing purple once again.

The only problem is Oher is failing English, which makes him academically ineligible to receive a football scholarship. It’s not until McGraw recites “The Charge of the Light Brigade” that Oher learns about courage, honor and ultimately passes another difficult test: his final English essay.

Oher decides to enroll at Ole Miss, which draws an NCAA investigation to ensure the Tuohy family did not tamper with his decision. Oher buys into it, then lashes out at Bullock, accusing her of taking him in just to get him to go to their alma mater. A resentful and confused Oher returns to the projects in search of his real mom, then busts up the local gangster’s home, a scene which probably warrants the film’s PG-13 rating. 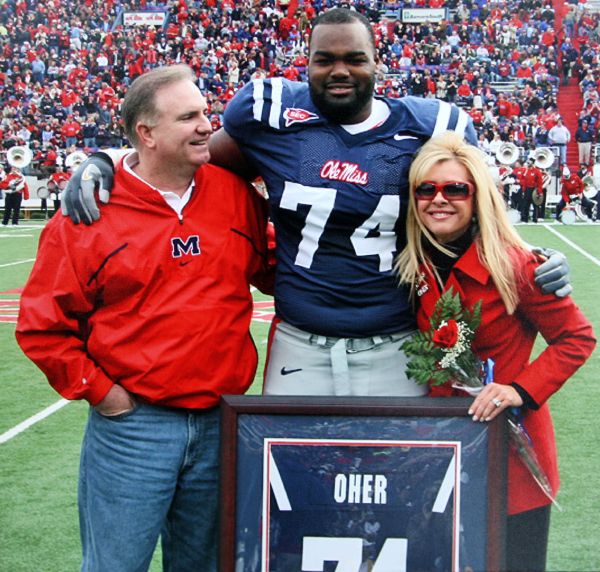 Little by little, the audience is allowed a peek into Oher’s upbringing, not a pretty picture, probably less so in real life. The film features several touching moments such as when the Tuohy’s drop Oher off at college or when Bullock confronts Oher’s real mother, who can barely remember which man was his biological father.

The film has its share of trite, Hollywood moments including McGraw and Bullock’s designer marriage in which they never argue, Bullock telling off her country club friends in a moment of racial enlightenment, phoning the football coach from the sidelines to call in plays and Oher getting flagged in his opening game for ‘excessive blocking.’ Blind Side also glosses over several racial and class stereotypes, careful to equally bash Democrats, rednecks and Southerners. The film also provides several moments of comic relief in the form of McGraw’s occasional one-liners that help to break up the film’s drama.

Without reading Lewis’ book or knowing the complete Oher history, one might think the film is overdramatized, until the closing credits which show a sequence of real pictures of Oher being raised by Tuohy family. They remind us that Blind Side is not only based on a true story, it is a true story.

Blind Side won’t go down in the annals as the greatest sports movie ever made but it does have its moments. It’s a touching depiction of what can result when some, give others, a fighting chance.

29 Replies to “Movie review: The Blind Side with Sandra Bullock”