I’ve always hated going to weddings on important football weekends. Chalk it up to a conflict of interest. It’s bad enough most weddings already ridicule us single guys by gathering us into a circle of losers and making us pretend to want to catch a garter hurled into the crowd by the bride. While women scratch and claw to claim a flying bouquet in hopes of being the next one to wed, it’s just as common to see guys form a gaping hole around the dance floor where the bride’s garter lands unwanted.

One year, I was made to attend a wedding of some friends of a girl I was seeing at the time. To make matters worse, the reception coincided with a crucial Gator March Madness game. I didn’t like the couple that much to begin with and now they were making me miss my sacred hoops. 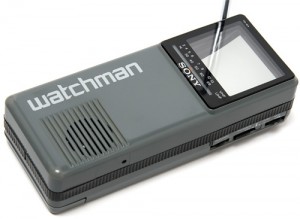 After the wedding, I stumbled around the hotel, looking for a television to catch some of the game, but there was not a set to be found. This was long before iPhones or streaming video invaded our lives. Fortunately, I brought my trusty, hand-held Sony Watchman so I was able to keep tabs on the score. Slyly, of course. I never pulled it out during the actual ceremony and yes, I got permission from my date before periodically sneaking away to feed the monkey. She wasn’t happy about it but she knew it was important to me. She was also an alum and understood my unhealthy addiction to all things Gator.

A group of partygoers ultimately surrounded me, also wanting to know the score. I mean, the wedding was in Florida and it was a big game.

Eventually, a gentleman in a tuxedo approached the group that had assembled around me, watched for a bit, then announced loudly that he went to Florida State and hated the Gators. A few cocktails in, I believe I politely told the guy to screw off. It wasn’t until later that evening that I found out he was the groom’s brother. Not one of my finer moments. Let’s just say I never heard the end of it from my date.

So as you can see, for me, weddings and big time sporting events have never mixed.

Well, in 1996, when my mother decided to marry the love of her life, the festivities were held on the Saturday evening of Thanksgiving weekend. You Gator fans know where I’m going with this. The wedding was lovely. It was the social event of the winter with well over 300 people in attendance. The only problem was…. it coincided with the biggest football game of the year: #1 Florida vs #2 Florida State. 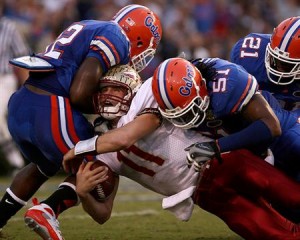 Although the rivalry has been one-sided lately with Florida winning the last five, in the mid-1990s, there were few other games on a national scale that matched the intensity of Spurrier v. Bowden. That year, both teams were undefeated. The game would determine who would play for a national championship. I mean, who in their right mind would plan a wedding at that time?

Fortunately, kickoff was in the afternoon and didn’t conflict with the evening’s festivities. The last thing I wanted to do was upset Mother of Sportschump on her most special day. So my uncle, step-father and I, all Florida graduates with cumber buns in place, huddled around the hotel room television to watch our undefeated Gators take on the hated Seminoles.

Well, we lost to Florida State that day, 24-21, another heartbreaking loss at the hands of our arch-nemesis. Mom was concerned the events of that day would ruin my night. It was a bitter pill to swallow but not even the foul events that took place in Doak Campbell that afternoon could ruin the night that was to be. After all, I was giving my mom away later that evening to the man she would spend the rest of her life with. 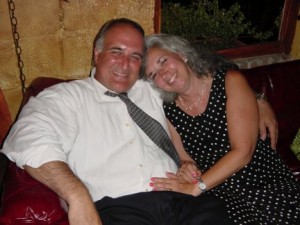 As we all know, the story has a happy ending. The wedding was fabulous. We danced the night away and the Gators ultimately went on to exact revenge over Florida State only six weeks later to win their first national championship. More importantly, mom is still very happily married.

A friend asked me the other day what I am thankful for this Thanksgiving. Well, exactly that. I’m thankful for the health and happiness and my loving friends and family. I’m happy my mother found a man she can grow old with. All is good, very good. Of course, a few more Gator national championships didn’t hurt either.

Happy Thanksgiving, everyone and to mom and John… a very happy anniversary.