Turkey, family and five days full of football.Now THAT’S something to be thankful for (And sure; a steal on a big screen TV!)! The Big 12 and SEC already have next weekend’s conference games set, but their finalists must take care of a little business first.The Big 12 championship game will feature Nebraska versus Texas and the SEC championship will pit Alabama against Florida.The big three would obviously prefer to go into their championship games unblemished but undefeated Boise State, TCU and Cincinnati probably feel a little differently.As we’ve seen in the past, anything can happen during rivalry week.In the NFL, we’re treated to three games on turkey day, then a Monday night special that might just be the most entertaining game of the year. 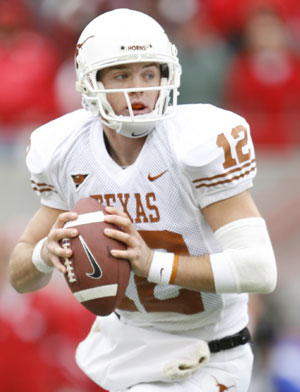 Longhorn fans can smell a national championship berth.After being left out of the big game last year, they’re only two wins away from reaching their first BCS title game since Vince Young won it for them a few years ago.Young didn’t win the Heisman that year but his successor Colt McCoy just might.The Longhorn quarterback is the nation’s most accurate passer (73%) and last week became the winningest quarterback in NCAA history (43).If McCoy wins the Heisman this year, it will be no make up award.The kid has earned it, especially considering he had big shoes to fill in replacing Young.It’s difficult to follow a legend but Colt McCoy obviously never got that memo.A&M won’t go quietly though as they’d like nothing more than to spoil Texas’ perfect season.The Aggies are 7th in the nation in total offense and their quarterback, Jerrod Johnson, has actually thrown more touchdown passes and fewer interceptions this season than McCoy.He’ll need to keep that up if A&M wants any chance in this one. 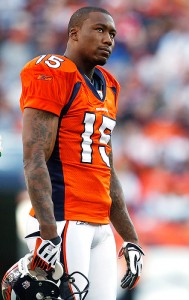 What has happened to these two teams?When the Giants and Broncos started off the season at 5-0 and 6-0 respectively, they looked like Super Bowl contenders.Now they’ll each be lucky to make the post-season.The G-Men finally ended their four-game skid last Sunday with an overtime win over Atlanta.They’re hoping to feed off that momentum going into the NFL’s home stretch.Their defense has been woeful lately, but not quite as bad as Denver’s, who have been outscored by 80 points in their last four games!!!They’re allowing 350 yards per game over that stretch.Where’s Bill Romanowski when they need him?Denver called a players-only meeting this week to resolve last Sunday’s sideline spat between Knowshon Moreno and Brandon Marshall.Since both these teams have been so bad defensively, if you like touchdowns, this might be a game worth watching if you can battle through the tryptophan. 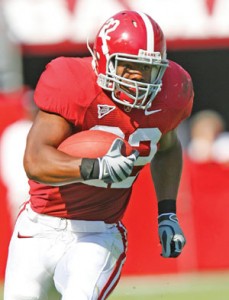 Ah… rivalry week.Does anyone really expect Auburn to knock off unbeaten Alabama?These two teams first played each other in the Iron Bowl in 1893, twenty years before Bear Bryant was even born.Alabama is one win away, albeit against their most bitter rival, from facing Florida in what should be the most captivating college football game of the year.Mark Ingram’s name continues to surface among Heisman frontrunners.He’s fourth in the nation in rushing yards and has seven 100-yard rushing games.He leads the SEC in yardage, yards per game and rushing touchdowns.Auburn had won six straight until Alabama ended that streak last year.Keeping that new streak alive might just make or break the Tide’s national championship chances. 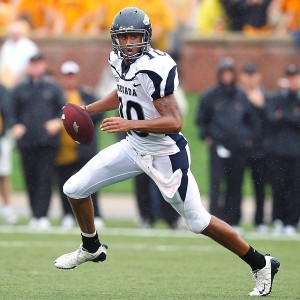 Las Vegas has set this game’s over/under at 71, meaning this game should boast more offense than Michael Richards’ stand-up routine.Although Boise State still has to play New Mexico State next week, this might be their last chance to wow BCS voters.Nevada actually leads the WAC at 7-0 but has been flying under the radar since starting 0-3.They haven’t lost since.The Wolf Pack have THREE 1,000 yard rushers in Vai Tuau, Luke Lippincott and QB Colin Kaepernick who have combined for 34 touchdowns.Nevada leads the nation in rushing yards and yards per carry, which means they run a lot and they’re effective when doing so.Boise State ranks 30th in the nation in rushing defense.They’ll want to make sure they have their defense in order if they want to remain perfect on the season. 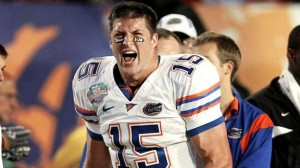 There might not be a dry eye in Gainesville this weekend as the Swamp is about to see the end of an era.These Gator seniors are already the winningest class in SEC history.Expect Tebow & Co. to receive a roaring ovation.He’s arguably the best player to ever don the orange and blue.Sorry, Emmitt, but one Heisman Trophy and two national championships are hard to argue with.Florida has won five straight in this rivalry dating back to Ron Zook’s 2004 victory in Tallahassee, meaning Urban Meyer has yet to lose to Florida State.It’s hard to believe he wants to start now. 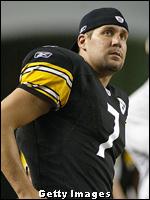 In another battle of NFL teams heading in the wrong direction, it’s put up or shut up time for two of the league’s traditional defensive mainstays.After impressive starts, both Pittsburgh and Baltimore are coming dangerously close to missing the playoffs.Ben Roethlisberger is expected to play this week after getting knocked out of last week’s game with a concussion.Good thing since backup Charlie Batch is lost to wrist surgery and former Oregon standout Dennis Dixon, Pittsburgh’s third stringer, has only one career pass attempt.Across the field, Baltimore has scored only 41 points in its last three games.Now they must face the Steelers who have allowed the fewest yards in the NFL.

Might we be witnessing a change of the guard in the NFL?The Saints have been unstoppable this year.With a win on Monday, they can clinch the NFC South with five games to play.What’s even more impressive is that they’ve been winning against quality opponents.New Orleans has already beaten the Eagles, Jets, Giants, Dolphins, Falcons and Panthers.And now come the big bad Pats.Expect Bourbon Street to be rocking on Monday, particularly if the Saints do what they’re expected to do, which is beat the Patriots and remain undefeated.

19 Replies to “What to watch this weekend: Turkey not included”