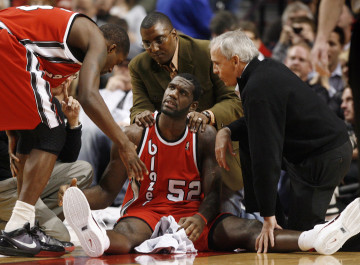 Two and a half years ago, Ohio State’s Greg Oden was the consensus number one draft pick of the Portland Trailblazers. It was hoped the seven-footer would bring the franchise back to prosperity. Since that day, Oden has been a mainstay on injured reserve.

Unfortunately for the Portland big man, his season was once again shortened due to a fractured left patella.

Oden played in 61 games last season, averaging only 21 minutes per game. This year, his season ended after only 21 games, making it only one full season he’ll have played after two in the league.

Prior to getting hurt, his minutes, points, rebounds and blocks per game were all up compared to last year. That all came to a disheartening end on December 5. If there’s any good to be taken out of this, Portland has played without him in the past and knows they will have to do so again for the remainder of this season. That still doesn’t leave Blazer fans feeling all warm and fuzzy.

In the meantime, the NBA and specifically Portland fans can only wish for a speedy recovery. 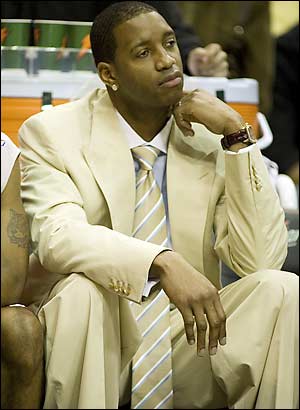 The wrong right to vote

Did I read this correctly? Tracy McGrady, who played in his first game of the season Tuesday night (8 minutes, 3 points), is the second leading vote-getter in the NBA’s All-Star race for Western Conference guards.

The oft-injured McGrady has garnered over 280,000 votes, which is more than Steve Nash, Deron Williams, and Brandon Roy. In fact, he’s won more votes than any Western guard other than Kobe Bryant. Now either Tracy’s mom has voted 280,000 times or we have some highly uneducated voters out there.

Fans, please! This is why we get a bad name, why critics claim we know nothing about sports and why some suggest the leagues should rid us of our right to vote.

NBA and Major League Baseball All-Star rosters are decided solely by fans. Yet the fan who speaks the loudest is the obsessed fan who stuffs one hundred ballots into the box or who visits NBA.com frequently enough to vote for his or her favorite superstar, even if they haven’t played a single minute. Power to the mouse-click.

Perhaps it’s time for an intervention, for I’m not sure the NBA can outfit T-Mac’s crutches in Western Conference colors.

I’m all for power to the people but let’s make educated decisions. Heck, why not just pencil in Michael, Magic, Charles, Larry and Patrick and have ourselves a dream team reunion.

I hereby proclaim it sportschump.net’s objective to educate the disinterested and uninformed sports fan one person at a time. People, we’re knowledgeable. Let’s act like it. If not, they’ll likely rid us of our right to vote… and rightfully so.

Let’s vote for the players who are far more deserving. Like Greg Oden. 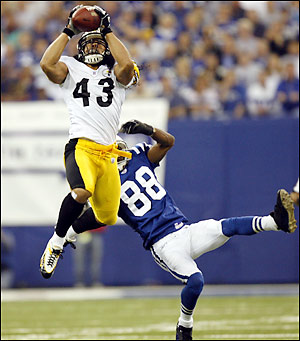 With only four weeks left in the NFL’s regular season, the MVP frontrunners are Drew Brees, Peyton Manning and Brett Favre. One can make a legitimate case for any one of those three.

But one player, has proven significantly more valuable to his team than any of those three. When healthy and on the field, Troy Polamalu rarely has his team lose and when injured, his team simply can’t get it done. After all, isn’t that the very definition of most valuable? I mean, if Brees, Manning or Favre were taken off their respective teams, they might not have the records they have now but they would most assuredly win some games.

The NBA has a statistic which is often a fair assessment of how valuable a player is to his team. The +/- measures how many points a team is either ahead or behind when a particular player is in the game or on the bench. The names atop the NBA’s +/- statistic are those you’d expect to see: Ron Artest, Kobe Bryant, Ray Allen, Dirk Nowitzki and Al Horford all rank in the top five. Rajon Rondo, Dwight Howard, Kevin Garnett, Paul Pierce, Pau Gasol, LeBron James, Kenyon Martin, Jason Kidd, Lamar Odom, Vince Carter and Carmelo Anthony are all in the top 25.

If they measured that stat in the NFL, Troy Polamalu would be off the charts. The defending champion Pittsburgh Steelers are 4-0 with a healthy Polamalu. They’re 2-7 when he’s injured. In three of their last four games without him, Pittsburgh has lost to the Raiders, Chiefs and Browns. In fact, since losing Polamalu to injury in Week 10, the Pittsburgh Steelers haven’t won a game.

When Troy is healthy, the Steelers are plus three in forcing turnovers; without him they’re minus five. Without a healthy Polamalu, the Pittsburgh Steelers are allowing nearly ten more points a game!

This might not earn Polamalu an MVP trophy or even a vote, but it should earn him something. Hopefully a healthy recovery before the Steelers miss the playoffs entirely.