You know you run a sports website when your mom calls and asks you “So… what do you think of that Arenas character?” Mom, you make me proud.

For those of you unfamiliar with the goings-on in the NBA these days, Gilbert Arenas, aka Agent Zero, aka the Hibachi, allegedly brought firearms into the Verizon Center last month, then wielded them with teammate Javaris Crittenton over a gambling dispute. Details are still unclear, yet the stern hand of Commissioner Stern has suspended Arenas indefinitely until the matter is resolved and the investigation concluded.

Before the suspension came down, however, Arenas was still allowed to play. The other night, in pregame warm-ups, Arenas was photographed making light of the incident, pointing his fingers as if they were guns and shooting at his teammates.

Not the brightest thing an NBA player has ever done.

(Ironically, Arenas plays for the Wizards, who in 1997 changed their name from the Washington Bullets because the NBA didn’t like the imagery the name portrayed)

So, in honor of Gilbert’s stupidity, we proudly present the decade’s first Caption Contest, courtesy of Getty Images.

As usual, the winner will get his or her name up in lights and very possibly an official SportsChump.net t-shirt… if I can ever get the darned things printed. 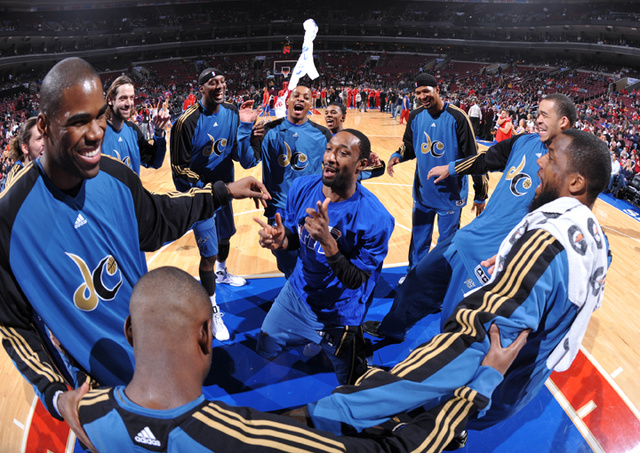