I’m always hesitant to label an athlete the best to ever play his sport, particularly since that label gets thrown around like a hot potato.

That being said, Roger Federer is the best men’s tennis player ever. Period. I never saw Bill Tilden play. I never watched Rod Laver. But I have seen Bjorn Borg, John McEnroe, Ivan Lendl, Boris Becker, Stefan Edberg, Jimmy Connors and Andre Agassi. Federer’s better than all of them. Or at least more dominant.

This weekend, Federer won his record 16th major. At only 29, he’s making a mockery of men’s tennis. His straight-set victory over Britain’s Andy Murray in the Australian Open finals was no exception. Not only did Federer destroy Murray’s will, he talked trash while doing so, mocking that it had been 150,000 years since a Brit had won a major. Make that 150,001.

Federer kills you with kindness then with aces and winners. So to celebrate the best tennis player ever, sportschump.net presents an often seen photo of Federer’s latest conquest: the mouth agape of Andy Murray.

Show me what ya’ got, boys and girls. And uh… keep it clean. 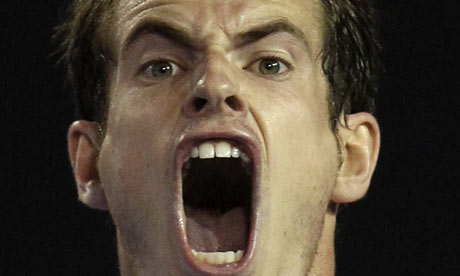