More often than not, the NBA superstar athlete is unable to translate the success he had on the floor onto either the sidelines or front office. There are exceptions to this rule, such as Pat Riley, Bill Russell, KC Jones or Rudy Tomjanovich, but for the most part, top-tier players have had difficulty leading their teams from the bench as easily as they did when they were in uniform. Imagine Coach Jordan condemning a player for not dropping forty a night. It’d be like Mozart asking a pupil to compose the perfect symphony. They simply expect too much. 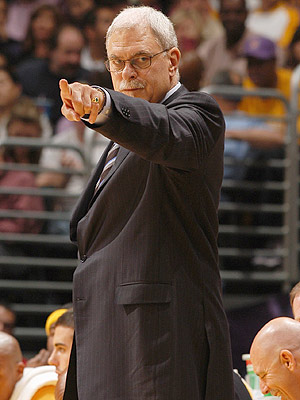 The best coaches are generally the more cerebral, fringe players, if they ever even played at all. Phil Jackson averaged seven points and four rebounds over his career but he’s the winningest coach of both the Chicago Bulls AND the Los Angeles Lakers. Red Auerbach never played a minute in the league.

One would think the greatest players ever would be able to at least scout talent, yet time and again they’ve proven woefully inadequate when it comes to building a championship franchise.

I know what you’re saying. Joe Dumars built a championship franchise, but this is the NBA and fans want to know what you’ve done for them lately. This year, the Pistons are 23 games out of first place and a shell of their former selves. Joe D is largely to blame.

On the court, Joe Dumars was a silent assassin, a key cog to Detroits’ run of back-to-back championships. On a team loaded with Isiah Thomas, Bill Laimbeer, Dennis Rodman, Mark Aguirre and John Salley, it was Dumars who won the 1989 Finals MVP.

Then came the 2003 NBA Draft and a decision that will haunt Joe Dumars forever. With Dwyane Wade, Carmelo Anthony and Chris Bosh still on the board, Dumars drafted Darko Milicic which rivals Portland’s selection of Sam Bowie over Michael Jordan as the biggest basketball blunder of all time. 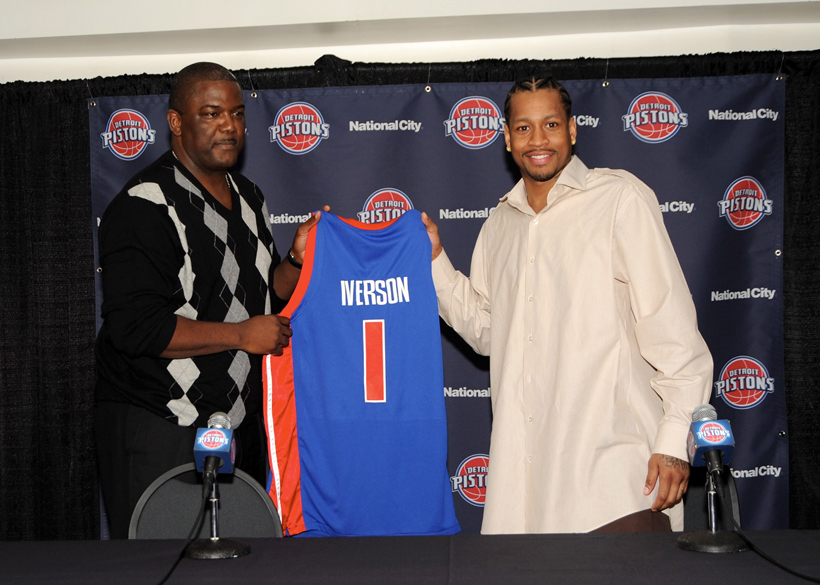 After six consecutive Eastern Conference Finals appearances but only one NBA title, Dumars decided to blow up the team. He drafted Jason Maxiell and Rodney Stuckey but Dumars also presided over the failed Allen Iverson experiment. After three full seasons and a .715 winning percentage, Dumars fired Flip Saunders for not being able to deliver another title. He hired Michael Curry, who finished 39-43 and fired him after one year. This year, he hired John Kuester over Avery Johnson. The Pistons are currently fifteen games under .500 and having their worst season in decades.

Dumars will always be a legend in Detroit. But he may be on thin ice if they can’t turn things around quickly.

Recently Isiah Thomas has been recognized more for bashing Magic Johnson and ruining both the Knicks and the CBA but younger fans forget just how dominant he was. There was Michael, Magic and Larry and Isiah Thomas as a not so distant fourth. He was a 12-time all-star. He averaged 20 points and 9 assists per game for his career. Then there was that Finals game where he scored 25 points… IN ONE QUARTER. 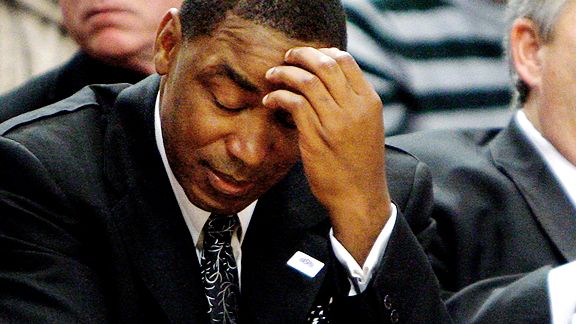 Isiah was the leader of the Bad Boys yet as GM, he’s just been bad. Sure, he drafted Damon Stoudamire, Marcus Camby and Tracy McGrady but was unable to build the Raptors into a successful franchise. The Continental Basketball Association went bankrupt under his ownership.

After a brief and relatively successful coaching stint with the Indiana Pacers, Thomas became President of Basketball Operations for the New York Knicks. His teams consistently had the highest payrolls and the worst records, never a good combination. He traded for Michael Curry and Zach Randolph which is about 700 pounds of bad decision-making. He was also sued for sexual harassment.

Isiah now finds himself in an entirely new challenge: coaching college kids at Florida International University. With failed stints in Toronto, Indy and New York, it’s highly unlikely any other NBA franchise will give Thomas a chance to run, or ruin, their franchise.

Most basketball fans agree that MJ was the best player to ever grace the hardwood. Unfortunately for his Airness, that excellence has not carried over into the front office. Far from it. 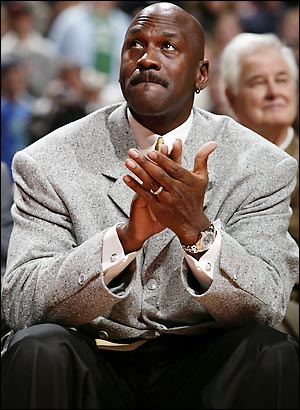 In 2000, MJ took over as President of Basketball Operations for the Washington Wizards. He was fired two-and-a-half years later, probably the first time he had been fired from anything. That was about as long as his baseball career with a similar amount of success.

Jordan was the brain trust behind drafting high schooler Kwame Brown first overall. Brown is currently coming off the bench for Detroit, averaging under four points and four rebounds a game. Jordan would have been better off drafting Sam Bowie. Jordan also drafted Jared Jeffries and Juan Dixon in the 2001 draft. Those two didn’t fare much better.

In 2006, Jordan became partial owner and managing member of basketball operations for the Charlotte Bobcats. In that time, they chose Adam Morrison third in 2006 when Brandon Roy was still on the board. Jordan selected Brandan Wright from his alma mater, then traded him to Golden State for Jason Richardson who turned out to be a bust. This year the Bobcats have finally proven to be worth a damn, currently hovering around .500 in a weak Eastern conference.

We’ll see if the Bobcats can make the playoffs this season or if their current success is just a flash in the pan.

Elgin Baylor was the Minneapolis Lakers’ number one draft pick in 1958. An 11-time all-star, Baylor has tallied 23,149 points and 11,463 rebounds over his career. After a brief coaching stint in New Orleans, he was hired on as the Clippers VP of basketball operations in 1986. That move secured their mediocrity for decades. 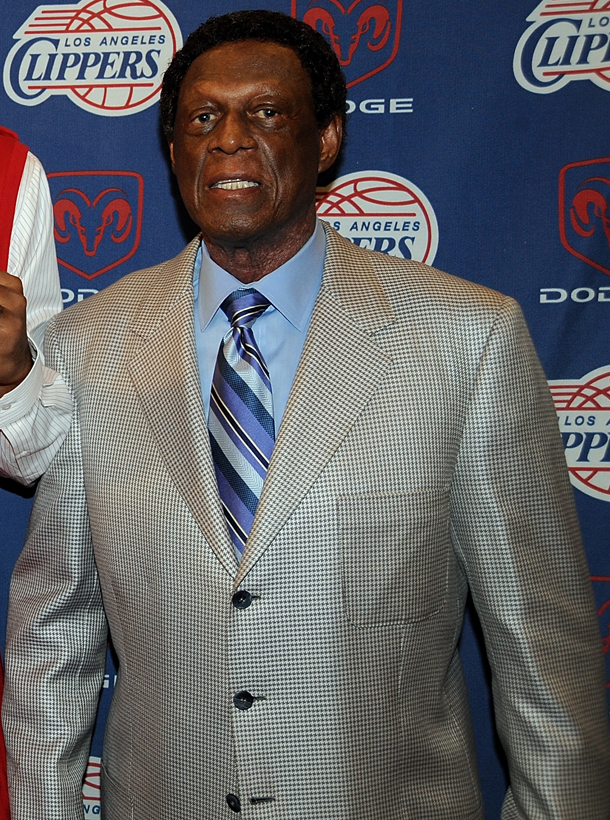 While Baylor cannot be held solely responsible for the Clippers’ woes, he certainly pulled the strings. He drafted Danny Manning first in 1988 which was a no-brainer but then drafted Danny Ferry second overall the following year. Ironically, Ferry has turned into a pretty good GM.

In the 1990s, Baylor drafted Loy Vaught, LeRon Ellis, Elmore Spencer, Randy Woods, Terry Dehere, and Lamond Murray. In 1996, he drafted Lorenzen Wright when Kobe Bryant, Steve Nash and Jermaine O’Neal were still available. In 1998, he drafted Michael Olowakandi over Antawn Jamison, Vince Carter, Dirk Nowitzki and Paul Pierce. Feeling nauseous yet? Add drafting Chris Wilcox one spot ahead of Amare Stoudemire in 2002 and that should do the trick.

In 2009, he filed an employment discrimination lawsuit against the Clippers citing he was fired based on age and race. Had they discriminated against him for his management inadequacies, he might have had a case.

In a two-team town, the Clippers have always played second fiddle to the Lakers but even the New York Mets have won the World Series, probably because Baylor wasn’t making their personnel decisions. Baylor finally won the league’s Executive of the Year award in 2006, meaning it took him 15 years of playing and another 20 in the office to be able to assess talent. I guess some people are just slow learners.

Baylor was fired in 2008 and replaced with Mike Dunleavy meaning the Clippers should still suck for a long time to come.

McHale was a beast in the post for the 1980s Celtics. Charles Barkley called McHale the toughest cover in the game. McHale’s teammates dubbed him the Black Hole, knowing he could score any time he got the ball on the low blocks. Little did they know that moniker would also refer to his decision-making as a GM. The only thing worse than Kevin McHale’s taste in sweaters was his taste in draft picks. 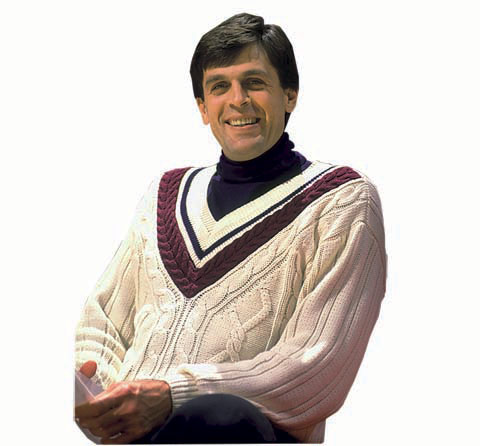 Despite his success with the Celtics, McHale will forever be known as the man who could not surround Kevin Garnett with talent. Garnett was ultimately traded to Boston where he won a championship in his first year.

Things got off to a promising start for McHale when he was hired in 1995. He drafted Garnett who would become the face of the franchise. McHale also signed Tom Gugliotta and Stephon Marbury. The only problem was, he drafted Ray Allen and traded him to get Marbury. Whoops! Years later, he would trade Marbury for Terrell Brandon. Ray Allen for Terrell Brandon? You’d get kicked out of your fantasy league for even suggesting such a trade.

Want more bad decisions? McHale drafted Brandon Roy then traded him for Randy Foye. McHale replaced Randy Wittman as the T’Wolves head coach on Dec 8, 2008 and went 20-43 the remainder of the season. He was not invited back. You can now find McHale doing analysis on NBA TV where he’s not destroying franchises.

McHale could score at will for the Celtics but as a GM, he was pretty much held scoreless.

21 Replies to “From First to Worst: Five NBA Hall of Famers who failed as GM”