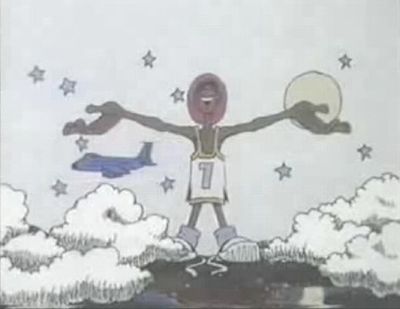 The next three weeks will ring in the most entertaining time of the year for sports fans: the NCAA Tournament, where anyone can be a hero, including you!  That’s assuming you can master the madness.

This site’s contest will be held a tad differently than most.  It will require a honed eye, a keen knowledge of the college basketball season… and as usual, a little luck.

The 2010 NCAA brackets are broken down as follows:

Jacksonville
Friday, March 19
No. 1 Duke vs. No. 16 Arkansas Pine Bluff-Winthrop winner
No. 8 California vs. No. 9 Louisville

Your first task is to choose the ONE team from each foursome above that you think will reach the Sweet 16.  For example, for the games held in Providence, Rhode Island, choose one team (Richmond, St, Mary’s, Villanova, Robert Morris) you think will survive through the first Sunday. 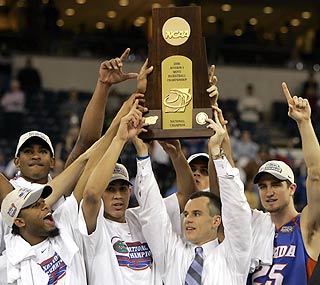 List ONLY your sweet sixteen teams in the comments below.  After the first two rounds, you will then be asked to pick the winners of later rounds based upon which teams you have remaining.

To the victor go the spoils, your name in the SportsChump Hall of Fame and a fashionable SportsChump t-shirt to call your own.

The picks are in, gentlemen, and the madness has officially begun!  We shall hereby call ourselves the Thirsty Thirteen.  Thirsty for winners, thirsty for whiskey and thirsty to be called King Chump for a Day.

As you can see, it’s been a little bloody so far.  Please review your entries for accuracy.

ROUGH OPENING DAY: Before sundown, Mr. Feller already had three of his Sweet 16 picks eliminated.  With the rash of Thursday upsets, most of us weren’t far behind.  At least we’ll have something to talk about on our radio show.  Only Liar North has 15 of 16 remaining.  His daughter must have made his picks for him.

BRAINFART OF THE WEEK PICK: Mr. Seay picked both Temple and Wisconsin to advance to the Sweet 16.  Only problem is those two schools are both in the same bracket, making such an event impossible.  I’ll refrain from telling you he’s a University of Tennessee graduate but hey, at least his alma mater is still in the tournament.

HOMER PICKS: Four of us chose Florida with the hope they could return one step closer to championship form.  The remaining nine chose Kansas State, realizing that teams who play inconsistent defense and who don’t value every possession are doomed to fail, especially in March.  How soon until Austin Rivers enrolls?

First off, much props to the frequently seen and always keen, gas-facin’, Zima-drinkin’, Buckeye-lovin’ Pedro_Nice who nailed a spectacular ten out of the Sweet Sixteen.  With all the upsets in this year’s tournament, such prognostication is to be commended. Take a bow, Pete.  And as we have one Ohio State grad (Pete_Nice) and one Tennessee grad (Austin Seay) participating in this year’s contest, things should get pretty heated as their two schools square off against one another in the very next round.  Let the trash talking begin.

You can ONLY USE THE TEAMS YOU HAVE REMAINING to choose your winners from here on out.  In the comments section below, I need you to fill out the entire rest of your brackets.  Pick your winners for the Elite Eight, Final Four, championship game and national champion and please do so in intelligible format.

Again… if any of your teams have been eliminated into the round of 8, you CAN NOT gain points for that round.  If you can’t pick 8 teams for this round, so be it.  Just list your possible winners.  For example, I selected neither Xavier nor Kansas State to advance in the bottom half of the West bracket, so I cannot gain points for that particular game.  But as I still have St Mary’s alive and not Baylor, I will obviously choose St Mary’s and hope they win to gain five points in that particular matchup.

Please ensure that I have correctly tabulated your total points and remaining teams.  If not, let me know.

To review the scoring, five points will be awarded for each team properly selected into the Elite Eight, seven points for each Final Four team selected, nine for each team you predict into the final game and eleven for correctly picking the national champion.

The t-shirt orders have been placed so have at it, gentlemen.  Might even order me some scarlet and gray for my boy, Pete_Nice if he can seal the deal.  Oh…. and if I win, you all will never hear the end of it.