What kind of sports website would we be if we didn’t celebrate Tiger Woods’ return to golf the right way… with a caption contest?

These last six months have undoubtedly been the most trying of young Eldrick’s life, so I figured why not pile on.  As more former lovers come out of the woodwork like rats off a sinking ship, Tiger fans (that still care) are left putting together the pieces of a sordid puzzle that denotes the sex scandal of the decade.

So readers, pretend you’re Elin and give Tiger your best shot, preferably with a witty caption this time instead of a nine iron.

Seen below, Tiger Woods is photographed standing by his golf clubs… texting.  Or should I say sexting?  I’ll let you be the judge.

This contest is one big meatball, folks.  Have fun! 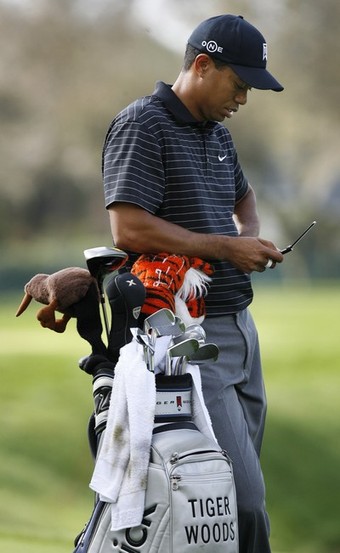