We have all played sports at some time in our lives.  Most of us, however, have never dunked a basketball, hit a 90 mph fastball or shot a round of golf under par.  We simply can’t relate to the lives of professional athletes.

For the longest time, Phil Mickelson was branded the world’s second greatest golfer.  As with most golfers on tour, Phil lived in Tiger’s shadow.  For Phil, however, that shadow loomed considerably larger.  As Tiger’s most bitter rival, Mickelson always seemed to come in second, never able to get over that hump.  He was routinely criticized for folding when it mattered most. 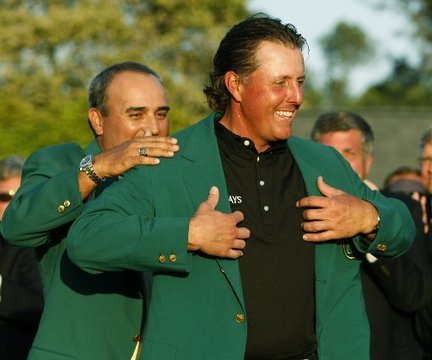 What a difference six years makes.

In 2004, Phil finally removed the ‘greatest golfer to never win a major’ label, winning his first Masters in spectacular fashion.  These days, winning at Augusta National must seem routine for Phil as this Sunday, he tallied his third win at golf’s most prestigious tour stop.

For those of you who failed to tune in last weekend, Mickelson was dominant.  On Saturday, he became only the third golfer ever to ever shoot back-to-back eagles at Augusta.  Then came Sunday’s shot on the 13th hole that will go down in Masters lore: a 6-iron that soared 207 yards between two pine trees and landed four feet from the hole.  Mickelson shot a bogey free Sunday, finishing 16-under-par for the tournament, capturing his fourth major and winning $1,350,000 in the process.

Winning the Masters, heck, even PLAYING at Augusta is something few of us can imagine but on a more personal level, Phil has had family issues which remind us that professional athletes are still human.  That’s what made Sunday so memorable. 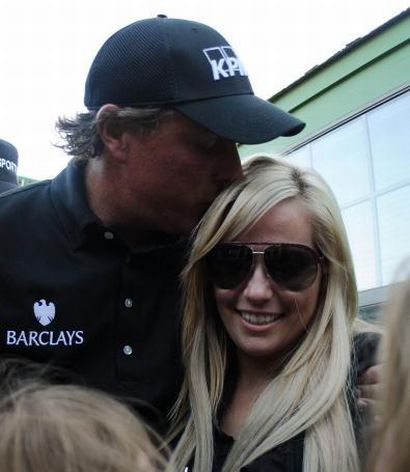 Last May, Phil’s wife was diagnosed with breast cancer.  Weeks later, his mother was similarly diagnosed.  Shortly thereafter, Mickelson took time off from ‘work’ to spend time with his family.  His eventual return to golf was considerably less celebrated than another golfer who recently experienced a more publicized absence.

As Mickelson walked off the 18th green at Augusta this Sunday, he had one important pit stop to make before being fitted with his third green blazer.  His wife and children were waiting in the audience.  They hugged and wept, knowing that although her disease is incurable, if only for a moment, all was better.  They celebrated as a family, something it will likely take Tiger Woods much longer to do, if it ever happens for him again.

For anyone watching on Sunday who has ever lost a loved one, a mother, a grandmother or a friend to cancer, Mickelson’s performance graced us with a moment of reflection.

Do professional sports feature their share of dunces?  Absolutely.  What walk of life doesn’t?  But every once in a while, we are treated to a magical event, such as last Sunday at Augusta.

These are the moments not even the greatest authors or filmmakers can recreate.  This is why even the casual fan can tune in to a sporting event such as this and witness real-life, unscripted drama.

These are real life stories.  These are the reasons we watch sports.  And that is why I am a sports fan.

25 Replies to “Phil Mickelson, the Masters and the reasons we watch sports”