You’re probably sitting there, asking yourself what kind of ridiculous playoffs preview takes place after the series had already started?  After all, you already know which team won the first game thus giving an unfair advantage.

Well, some of us do have jobs so I apologize for the delay.

On a recent internet search for fellow sports sites, I stumbled upon an unabashed, Atlanta Hawks fan who runs the Stubborn Bird.  As soon as I found out that the Magic, the team I root for, would play the Hawks, the team he roots for, I challenged him to a blog-off, outlining who would win and why.  He graciously accepted.  Sucks to be him.

So without further ado since I’m already late, I hereby present a preview of the Orlando Magic-Atlanta Hawks…

Prior to the series opener, fans wondered which team would have the advantage: the Hawks who had just finished a seven-game series against Milwaukee or the Magic who hadn’t faced any competition since sweeping the Charlotte Bobcats eight days ago.  The “rest versus rust” argument was answered resoundingly on Tuesday night as the Magic beat Atlanta in historic fashion, showing they hadn’t missed a beat.

Both the Hawks and the Magic were among the NBA’s most consistent teams all season long… and by consistent, I mean consistently good.  They faced each other four times with the Magic winning all but one, Atlanta’s lone win coming on a Josh Smith put-back dunk as time expired.  So does that mean the Hawks have more confidence after finally beating Orlando or do the Magic know they should have won all four games had they simply boxed out?

If Game One is any indication, Orlando clearly has the upper hand in this series.

Mike Bibby is the veteran point guard Atlanta wanted to lead their young team to the next level.  Jameer Nelson is the youthful point guard Orlando wanted to lead this team into the future.  Bibby is solid but he’s not prone to go off for twenty-five points a game.  Nelson has been averaging that lately.  Nelson gives up three inches and six years experience to Bibby but Nelson has been lights out of late.  As he goes, so go the Magic.  His pick-and-roll with Dwight Howard is nearly indefensible.  If Bibby can’t find a way to put pressure on Jameer, his scoring spree might continue. 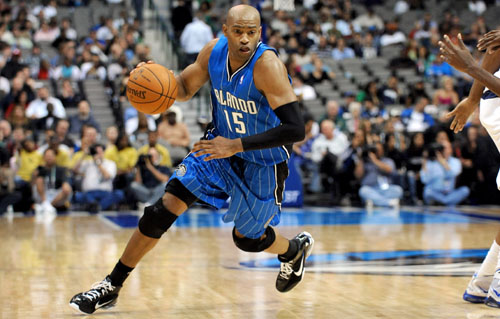 You never know what you’re going to get when either of these guards take the floor.  On any given night, they can go off for three or thirty.  The big difference in this series is that Atlanta desperately needs Johnson to score while Orlando can get by if Vinsanity has an off night.  Johnson has the potential to be one of the league’s best guards.  Vince was once in that very same boat.  If Atlanta wants any chance to advance, Johnson will not only have to score consistently, but do so efficiently.  Meanwhile, for the first time in his career, Carter no longer feels the pressure of leading his team in scoring and it’s reflected in his play.  This might be the only position where Atlanta has an edge over Orlando.  They’ll have to take advantage if they want to move on.

Now with his seventh team, Barnes was acquired by Orlando last summer primarily for his defense.  But that’s not all he brings to the table.  Barnes provides a little bit of everything: offense, rebounding, energy, experience and toughness.  He knows his limits and plays within the context of the game which is exactly what makes him such a good fit in Orlando.  After four years in the league, Marvin Williams is still trying to find himself.  He was the second overall pick in the 2005 NBA draft and has yet to live up to that potential.  Atlanta needs him to show up in this series but he has yet to convince me that he can. 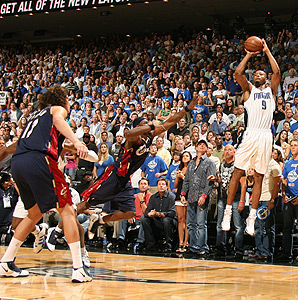 I was skeptical when Orlando signed Rashard Lewis to a max deal three years ago.  But his style of play fits with Orlando’s persona.  The Magic work the ball inside out, boasting a slew of perimeter shooters and opening things up for Dwight in the middle.  Even though Lewis is a defensive liability against larger power forwards, he makes up for it on the offensive end.  Smith was recently voted onto the NBA’s second team all-defense but Lewis is a tough cover.  He made huge baskets for Orlando during last year’s Finals run.  Meanwhile Smith’s offensive game isn’t nearly as well-rounded.  He might be one of the more impressive dunkers in the game but it will take more than a former Slam Dunk champion to get past the Magic. 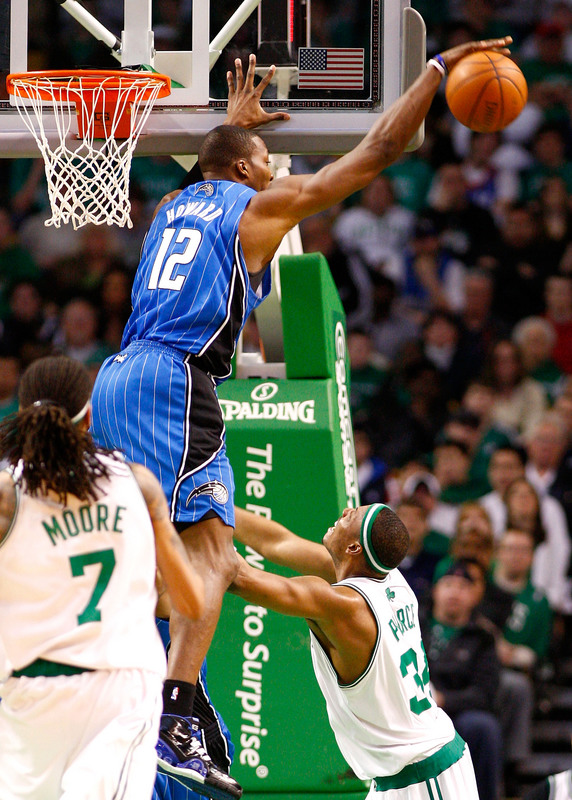 I’m one of the biggest Al Horford fans out there.  Horfy was the best player on a team that brought my alma mater back-to-back national championships.  But he can’t stick Dwight Howard.  Few can.  Horford is a power forward, not a center and Howard is the best center in the league meaning Horford gives up too much size and strength.  The Hawks can not afford to have him in foul trouble.  Now comes word that Howard has worked in his mental game.  A cerebral Dwight Howard is a scary thing.  Of course, he’ll have to adjust to the way NBA refs are officiating him.  The Magic can’t afford to have Dwight play limited minutes as he did against Charlotte.  That being said, Howard should be able to figure that out and have a dramatic effect on the series.

Jamal Crawford won this year’s Sixth Man of the Year Award by averaging 18 points a game.  Atlanta will need all that and more as Orlando’s bench is deeper and better on both ends of the floor.  Zaza Pachulia and Jason Collins will be called upon more for their defense on Dwight Howard than for their scoring.  Meanwhile, Pietrus has proven he’s the offensive spark off the bench the Magic need.  And Gortat is probably the best back-up center in the league. 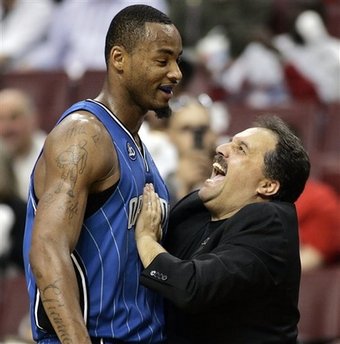 Stan Van Gundy gets a bad rap.  He was run out of Miami and replaced by Pat Riley who eventually won a title.  Ever since then, he’s had a chip on his shoulder.  He’s proven he has the talent with this Orlando team and more importantly, his players have his back.  Van Gundy led the Magic to post-season wins over both Boston and Cleveland on his way to the Finals last year.  This year’s team is better and so is Stan Van.  Woodson has yet to prove he can win a series that matters.

The Hawks roster is loaded with young talent.  But the main difference between Orlando and Atlanta is that Atlanta’s parts don’t yet equal a championship whole.  To paraphrase Charles Barkley, Orlando is the bettuh teeeam.  They’re better in both transition and the half-court set.  That became painfully evident for Hawks fans in Game One as Orlando dominated every aspect of the game, rattling off 19-0 and 13-3 runs with relative ease.  Atlanta may have just beaten the Milwaukee Bucks but in Game One, they were the deer in the headlights.

Prior to watching Game One, I was inclined to pick Orlando in seven games but after watching Tuesday’s beat-down, I’m going with Orlando in five.  They’re too big, too talented, too strong, too determined and pose way too many match-up problems for the Hawks.

Expect Orlando to roll through Atlanta and have time off once again while they wait for the winner of the Boston-Cleveland series.