Philadelphia fans are at it again.  You’d think there was nothing to do in that town for entertainment.  Apparently the Liberty Bell isn’t the only thing in Philly that’s cracked.

Last Monday night, at Citizens Park, smack dab in the middle of a Philadelphia Phillies game, 17-year old Steve Consalvi took it upon himself to run right onto the baseball field.  Prior to hopping the fence and springing into leftfield, Consalvi allegedly called his father and asked him if he should.  His father said no. Consalvi did it anyway.  Kids these days, huh?

Since the incident, sportswriters nationwide have debated whether police officers used excessive force in apprehending the teen by using a Taser to bring him down, however, I can tell you that if someone illegally trespassed onto the hallowed grounds of SportsChump.net, a good tazing would be the least of his concerns.

So, sports fans, here’s your latest caption contest.  In the photograph below, Consalvi is seen being chased down by officials only moments before being tasered and hitting the ground.

Winner of the caption-contest will go Taser-free for the rest of the week…. Maybe. 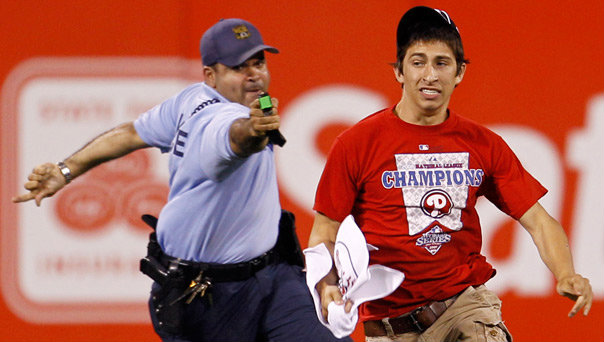