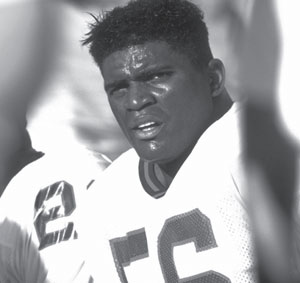 I was watching the disturbing news about Lawrence Taylor this week when something other than the actual atrocities of the situation struck me as odd.  In the English language, we have a slew of ways, a myriad of manners, an array of avenues to describe any one particular thing.

But after all these years, there’s still amazingly only one word for pimp.

As the story broke, I listened to reporter after reporter reveal the sordid details of that evening.  Every time they mentioned the word pimp, it amazed me that we have yet to invent a more acceptable word to describe this profession.  Despite the entrepreneurial spirit of those who have chosen that line of work, pimp just seems like an inappropriate word to say on television.  If you’ve never had to explain to your kids what pimp meant, you did after watching Thursday’s news.

We’re an imaginative folk.  Can’t we do any better?  In Night Shift, one of the most underrated comedies of all time, Michael Keaton encourages his colleague Henry Winkler to supplement their mundane lives as morgue night-watchmen by becoming pimps.  In the film, Keaton tells Winkler “Pimp is such an ugly word.  We should call ourselves Love Brokers.”  Despite Keaton’s comedic brilliance, his suggestion never caught on.  We’re still stuck with only one abrasive, four-letter word to describe this trade.

Maybe we never came up with another word to punish pimps for their unseemly lifestyle.  Or perhaps rappers like Jay-Z made the word fashionable enough to keep around.  Either way, pimp has a monopoly on the word pimp. There’s no other way to describe it.

Our legal system will eventually determine Lawrence Taylor’s fate, although he probably already did so the morning he stepped into a hotel room with a 16 year old girl.  My lifelong friend, a diehard Giants fan, has already packed away all his LT gear, never to be seen again except at his next eBay fire sale.

We might never know what happened that regrettable evening.  It’s too late for LT… but it’s not too late for us to come up with a more palatable word for pimp before the next time an athlete does something stupid.

Drugs: Marijuana use and the Florida Gators

I’ve said it before and I’ll say it again.  I was never expelled from the University of Florida for taking drugs.  I wasn’t on scholarship, however, nor did I play football in front of 90,000 rabid fans even though my intramural softball team did beat Shane Matthews and a number of other Gator greats, but that’s a story for another time.

Recently, the Orlando Sentinel reported that, according to one former Florida cornerback, up to 75% of the 2006 team smoked marijuana.  That’s a pretty high number… no pun intended. 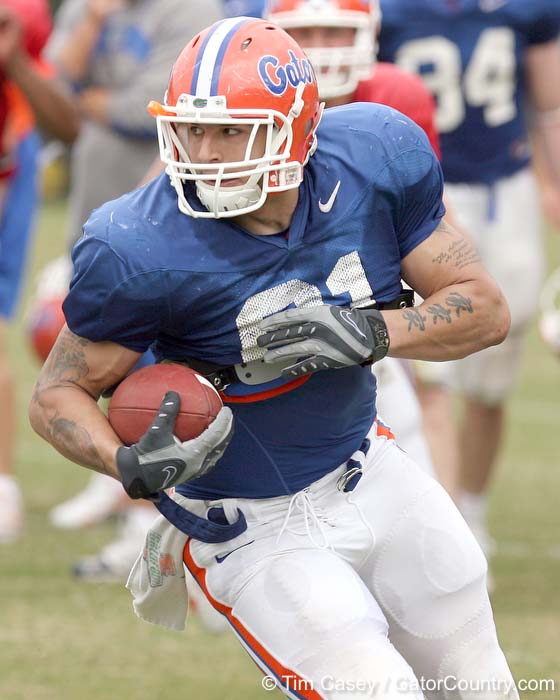 Percy Harvin failed a drug test at the 2009 NFL combine.  This year, former Florida tight end Aaron Hernandez also admitted to failing a drug test.  The Boston Globe reported that his draft status dropped as a result, a report Hernandez later denied.  At least we know now what it means when a player is suspended for undisclosed reasons.

Ultimately, every man is responsible for his own actions but how much responsibility does Urban Meyer and the Florida coaching staff have in all this?  I would imagine it’s nearly impossible to police all 85 scholarship athletes.  Many criticized Meyer for not making Tim Tebow more NFL-ready by adjusting his throwing motion, but constantly monitoring off-the-field behavior of his players is a different animal altogether.

Elite college football programs are under intense scrutiny when it comes to the actions of their players.  Like any major corporation, its employees constitute its image.  Coaches can suspend players like Carlos Dunlap after getting arrested for DUI the week of the biggest game of his life, but they can’t monitor them 24/7.  College kids are still college kids.  They’re going to make mistakes.  Temptation is everywhere, particularly for nineteen year olds, deified as they walk around campus.

Ultimately, it’s up to the student-athlete to use his best judgment.  And that’s probably to put down the joint the day of a big game.

But hey, who am I to throw stones?

A friend recently e-mailed me the shocking news that Oprah Winfrey was once romantically involved with none other than John Tesh.

Most of us were taken aback by this rendezvous but after thinking about it, the affair seems perfectly natural.  After all, Tesh graced sports fans with one of the greatest theme songs ever.

Since the birth of rock and roll, women have dropped their drawers for musicians, so it’s only appropriate that Oprah was wooed by Tesh’s soothing sounds.  Why not?  The rest of us were.  NBA fans have been humming his work for years.  Instead of being ridiculed for his smooth jazz stylings, Tesh is untouchable in the sports community for his contribution.  Someone get Kenny G’s agent on the phone and have him work up a new MMA theme.

But back to Oprah.  Were she and Tesh involved when he penned the tune?  Did he come up with it while snuggled next to her in bed, wearing their matching, monogrammed silk pajamas as she dreamed of making her next billion?  Was Oprah Tesh’ muse?  And if so, why hasn’t Stedman Graham ever had a Top 40 hit?  Now that she and Tesh are split, does Oprah have to change the channel when the NBA comes on or does she watch intently, reminiscing of a fonder time, while Stedman storms out of the room saying “I’m not watching this!”

At least we know now that even Oprah is human, easily succumbed to the sound of music and those who write it.  You can thank me later for posting Tesh’s NBA theme.  If you end up humming it later, don’t worry.  I have been for years.

57 thoughts on “Chumpservations, Vol. 12 Sex, Drugs and Rock and Roll edition: Lawrence Taylor, Oprah Winfrey, John Tesh and marijuana use at the University of Florida”