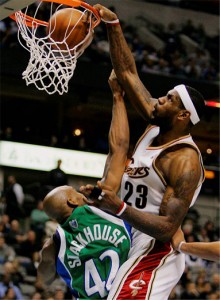 When you think of desperation in sports, you generally think of the Hail Mary pass or the last second heave from half-court as time expires.  Well, the city of Cleveland has set a new standard for desperation… and they’ve done so musically.

Have you ever been so distraught about a break-up that you filmed a video begging your loved one to stay?  Well, Cleveland has.

As most of us know, this could be the summer of Cleveland’s discontent.  The best player in Cavaliers history, who once again fell short of an NBA title this season, will soon become a free-agent.  And there isn’t a team out there that wouldn’t want him.

The question is who can afford him.  New York, New Jersey, Chicago, Miami and Los Angeles are all rumored to be in the running, yet nobody knows, probably not even LeBron, which of those uniforms he’ll be wearing next season.

In the hopes of getting LeBron to stay in Cleveland, a number of local business professionals who call themselves “Clevelanders for LeBron James” have put together a touching little ditty, begging the Chosen One to stay.  Fortunately, they didn’t quit their day jobs.

The “Clevelanders” are comprised of local disc jockeys, judges, musicians, politicians, television personalities and pitchmen, most of whom can’t carry a tune, but who all recognize that LeBron leaving Cleveland is bad for business and even worse for the Cavs.

The video is actually quite touching, although more atonal than your average karaoke singer.  So without further ado, ladies and gentlemen, I hereby give you… the Clevelanders.