And what is everyone talking about after Thursday’s Game One?  Not Kobe being only three wins away from his fifth championship.  Not Pau Gasol’s 23 points or eight offensive rebounds.  Not the fact that the Lakers led the Celtics from start to finish.

We’re talking about a kiss.  Yes, a kiss.

Apparently, during the game, as the Staples Center kiss-cam panned through the star-laden crowd, the cameraman found Dustin Hoffman sitting next to Jason Bateman.

Needless to say, the online gossip publications had a field day with this one.  “Dustin Hoffman Swaps Spit with Jason Bateman at NBA Finals!”  “Lakers Kiss-cam Exposes Jason Bateman and Dustin Hoffman!”  So I thought to myself, if you can’t beat ‘em, join ‘em.

Are these two actually lovers?  Did “Tootsie” end up getting the best of Hoffman?  Were they researching for their roles in “Brokeback Two: Cougar Division?”

I’ll let you decide, sports fans, with yet another seedy caption contest.  Have at it.  Winning entry will receive a wet one from one of the two major motion picture stars featured below. 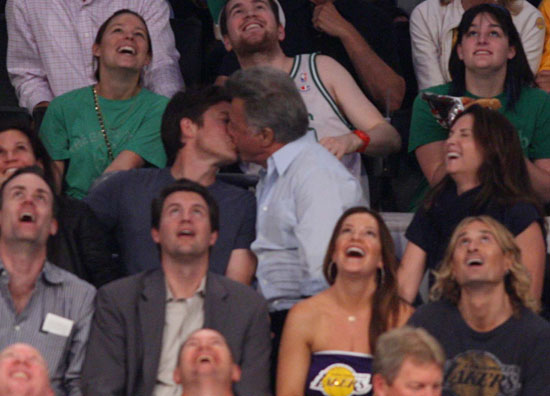 72 Replies to “Caption Contest celebrates Dustin Hoffman, Jason Bateman and the kiss that sent shockwaves through the NBA Finals”