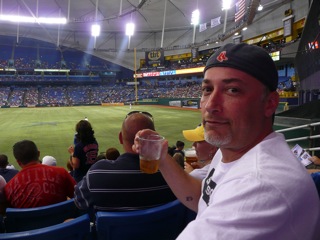 I recently attended my first major league baseball game of the 2010 season.  The game took place at Tropicana Field between two of the league’s best teams: the Boston Red Sox and the Tampa Bay Rays.  It featured two of the game’s, best young pitchers (Clay Buchholz vs. Wade Davis) and hosted plenty of firepower with home runs from David Ortiz, Kevin Youkilis and Carlos Pena.

As you can see, the game had a lot going for it.

So then why was I bored out of my mind by the third inning, sneaking away to catch the Magic-Celtics overtime playoff game calling to me from the local sports bar.

I grew up in a baseball family.  All other sports took a back seat.  As a kid, there wasn’t a statistic I couldn’t rattle off the tip of my tongue or a starting lineup I couldn’t recite by heart.  But these days, I find the sport unwatchable.  I don’t think I’m alone in that sentiment.

As I’ve gotten older, I find myself thirsting for the instant gratification of the NFL and NBA.  The home run has lost its luster.  Heck, even golf is more entertaining these days… as long as Tiger Woods is playing.

Over the past few years, the NFL and NBA have done a considerably better job marketing their product.  The NFL continues to sell itself, despite the continual off-the-field incidents of many of its stars.  Under Commissioner David Stern, the NBA chose to market itself by emphasizing the individual athlete in lieu of the team.  Many criticized the league for this… but it worked.  LeBron James, Kobe Bryant, Dwyane Wade and Dwight Howard are instantly recognizable.  Albert Pujols is arguably the best player in Major League Baseball but could the average American pick him out of a lineup? 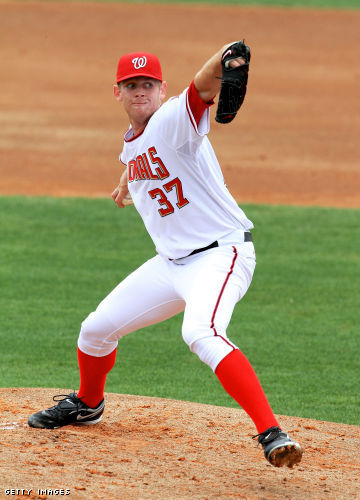 This is exactly why baseball should market the hell out of Stephen Strasburg.  There is no doubt that, at 21 years old, this young pitcher has the potential to not only be an all-time great, but to bring back something baseball has lost.

I plead guilty to tuning into Strasburg’s major league debut against the Pittsburgh Pirates. The kid lived up to the hype and then some.  He fanned fourteen batters and tipped the radar gun at over 100mph.  Strasburg was definitely worth the watch despite Bob Costas fawning all over him with endless comparisons to Walter Johnson.  But Costas wasn’t the only one in awe.  ESPN’s Tim Kurkjian called Strasburg’s performance “stunning beyond words.”

These days we’re quick to proclaim athletes the best ever but in Strasburg’s case, the publicity might be warranted.  In his second outing, he struck out eight Cleveland Indians.  He’s already been named National League Player of the Week… and he’s only BEEN in the league for a week!  At this rate, he better have plenty of room on his mantel.

We can set aside the historical comparisons for now.  The kid needs to make it through a few solid seasons and make legitimate contenders out of the Washington Nationals first.

But baseball needs Stephen Strasburg.  He’s already the most marketable player in the game.  Heck, he was baseball’s biggest individual asset before even throwing a pitch.  He got me watching and that’s more of an accomplishment than striking out fourteen Pirates.

Of course, the dinosaur that is Bud Selig probably won’t heed this advice and recognize the need to rebuild the sport he has sorely mismanaged.  And that’s a shame because I WANT to be a fan again.

Strasburg’s long-term success obviously depends on his health, desire and luck but if he can keep it up, the sky’s the limit.  Let’s just hope Major League Baseball recognizes him as such.

19 thoughts on “Can Stephen Strasburg save Major League Baseball?”