At SportsChump.net, we strive to ask the hard-hitting, pertinent, analytical questions other independent sports sites won’t dare to ask.  In keeping with that theme, we hereby present several burning questions that surround the final game of the NBA season…

What is up with Andy Garcia’s mustache and if it’s for a movie role, why would I want to pay good money to see that?

How will Doc Rivers adjust to life without Kendrick Perkins?

Will this be the last time we see the Big Three in a Celtics uniform?

In victory, will either Kobe Bryant or Paul Pierce lead his teammates in his own rendition of “Pants on the Ground?”

Will this be Phil Jackson’s final game on an NBA sideline?

When will sportscasters stop asking what winning, or not winning, another NBA title will mean for Kobe Bryant’s legacy?

Where will I watch the game, how much will I pay per refreshing Jack Daniels cocktail and how many will it take before it’s clearly unsafe for me to get behind the wheel?

Are Tiger and Elin finally splitting up? 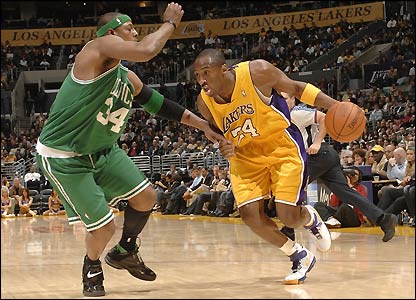 Which team wants it more tonight?

Will Game Seven go down to the wire or will it be another blowout?

Speaking of blowout, if someone farts during L.A.’s pre-game, meditation session, will the locker room break out into laughter and if so, which player is the most likely to break wind?

Which team boasts the more obnoxious fan base?

What’s the most someone paid for a court-side seat and by any chance is this person hiring a personal assistant?

Who will be the next same sex couple to make out on camera?

Finally… who will win and what will be the final score?  Guess both correctly prior to tip-off and become the proud owner of your own SportsChump t-shirt.