March, 2010 marked twenty years since the passing of Hank Gathers.  I intended to write about him and my Loyola-Marymount experience at the time, but the words didn’t come out right.  After watching ESPN’s Guru of Go, a documentary about LMU’s former head coach Paul Westhead, I was once again reminded of Gathers’ legacy and the aura surrounding the weeks after his death . 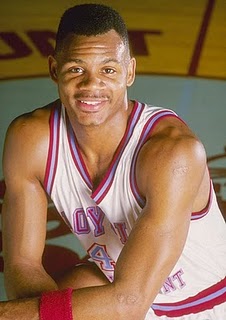 Like Len Bias before him, Gathers was a student athlete, a truly dominant basketball player, whose life was cut short long before he had a chance to realize his true potential.  There’s no telling what either one of them could have become.

I remember watching Gathers play on television that season.  If you liked offense, you liked LMU and Gathers was the kind of guy who could easily become your favorite player.  Westhead described him as “full of laughter, joviality and camaraderie.”  On a high-flying, Loyola team, Gathers was the workhorse, the team leader and its best player.

At only six-foot-seven, undersized for an NBA power forward, Gathers was a rebounding machine, one of only three players to ever lead the NCAA in both scoring and rebounding.  Xavier McDaniel did so for Wichita State in 1985.  Kurt Thomas did so for TCU in 1995.  Both went on to have respectable NBA careers.  One can’t help but think Gathers would have been better than both of them.

Despite Gathers’ legacy, perhaps the most memorable game in Loyola-Marymount history was one in which he never played.

Calling the atmosphere electric is an overused sports cliché, but if it were ever accurate, March 18, 1990 would be that day and Long Beach Arena would be that venue.

I should know because I was there.

My mother was living in Los Angeles at the time and I was visiting her from Florida on spring break.  A buddy of mine, the Gun, had somehow landed tickets to that day’s games.  On the slate that day: Arizona vs. Alabama and Loyola-Marymount vs. defending national champion Michigan.  Little did we know what was in store.

Although Glen Rice was gone, that Wolverine team was still loaded with future NBA talent: Loy Vaught, Terry Mills, Rumeal Robinson, Tony Tolbert, Sean Higgins, and James Voskuil.  Loyola guard Tom Peabody called them “the biggest team [he] had ever seen.”  With Gathers gone, the only Loyola player that had any legitimate shot at the next level was Bo Kimble. 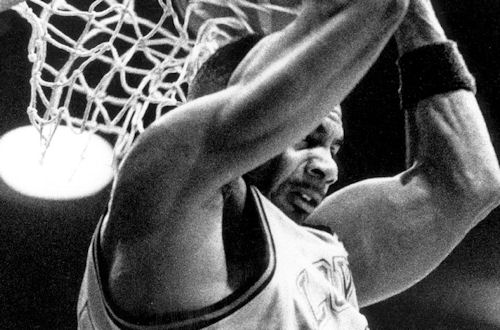 That mattered little, however, because that afternoon was all about #44.  Loyola-Marymount torched Michigan 149-115, setting an NCAA record for points scored in a single post-season game in the process.  If you blinked, you missed a basket.  The unlikely hero that day was sharp-shooting Jeff Fryer who scored 41 points.  It was as if he couldn’t miss.  Gather’s first mate, Bo Kimble, added 37.  Michigan never stood a chance.

It was the first time I had ever seen players write the number of a fallen teammate on their hi-tops.  Even people in the stands were doing it.  There were painted faces and signs everywhere showing their support for the memory of Hank Gathers.  After the blowout, hugs, tears, and autographs were exchanged amid an arena that was wholly supportive of LMU’s cause.  Leaving that day, we knew we had just seen something special.

Hank Gathers had passed away from his heart condition only two weeks earlier.  Somewhat ironic that an enlarged heart led to his death.  LMU would eventually lose to that year’s champion UNLV.

As sports fans, every so often, we’re blessed to witness a game that transcends sport.  That was exactly what happened in Long Beach Arena that day.  Thanks, JJ.