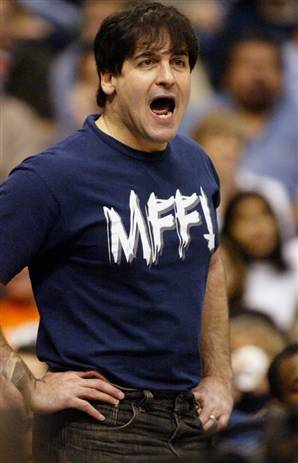 It’s a tough world for Mark Cuban. Not to knock anyone who made a fortune in excess of two billion dollars. But to go from computer ubernerd into the NBA with a revamped image of an engaged, tough, devil-may-care persona and actually keep it on overdrive has to be hard work.

To that end, Mr. Cuban has never lacked in the controversy department. This time, however, he’s not just going after NBA officials or throwing Avery Johnson under the bus. Cuban has decided that the Miami Heat didn’t play by the rules in their recent free agent super spree.

The always outspoken Dallas Mavericks owner claims that the NBA should probe exactly how LeBron James and Chris Bosh ended up in Miami, implying that James possibly tanked Cleveland’s series with Boston and even that Pat Riley was up to no good with the utter annihilation of his playoff basketball team to make room for the signings.

Cuban, never one to hold his tongue, is no stranger to complaining. But to some people, this seems more like a personal vendetta. Cuban once had an NBA Finals squad in Dallas. That squad lost to the Miami Heat in 6 games. Any possible motivation there?

It’s a gamble for Cuban to speak out about this. Stern thinks any such talk is a bad reflection on the league. And like an older, visually impaired version of Fidel Castro, Davey boy quickly swoops in with punishment to put a sock in it.

Of course, Cuban probably blows more money at an online casino every week than what Stern could fine him in a year. So Mark’s certainly not shy about voicing his opinion.

But this one may be a bit of a stretch, even for him.

If Miami is investigated, it’s still unclear what could possibly be found. Perhaps a revelation that LeBron James did intentionally give 80% instead of 100% during a few games because he was sick of Cleveland? If this is true, it does nothing but tarnish James’ reputation.

Cuban isn’t stupid by any stretch. He has to know this. And if that’s all Cuban is after, it’s fairly obvious that this is a personal beef he has with Miami.

18 Replies to “Cuban Heats Up Miami”