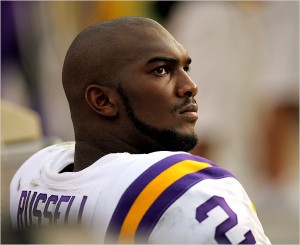 Has anyone else seen ESPN’s latest interview with JaMarcus Russell?  Well, I have.  Immediately after struggling through my favorite network’s feeble attempt to resurrect a sports figure who clearly isn’t worth the attention, I was struck by ten questions.

1 – With the millions JaMarcus stole, er…. earned from the Oakland Raiders, is that Cubic Zirconia on his ears or are those actual diamonds?  Those things are HUGE!  He might have more karats per ear than career touchdowns.

2 – After “allegedly” attending classes at LSU for three years, why can Russell still not speak in complete sentences? 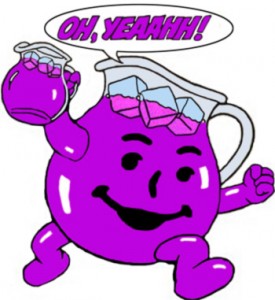 3 – Is another NFL team actually willing to take a chance on this guy?

4 – What was the need to even conduct this interview?  Is ESPN really THAT out of news stories?  Can’t they just talk about Brett Favre some more?

5 – What is going on with Colleen Dominguez’s eyelashes?  Did she just come back from a night out of clubbing?

6 – What is purple drank anyway and does it taste anything like Kool-aid? 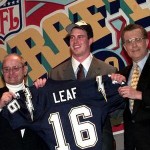 7 – Does anyone actually have the Raiders winning more than six games this year?

8 – Did LeBron’s “Decision” subsidize this interview?

9 – Does anyone else think Tim Tebow WON’T have a better career than this guy?

10 – Does Ryan Leaf sleep any easier at night knowing he is no longer considered the biggest NFL draft bust of all time?

32 Replies to “ESPN, JaMarcus Russell, Colleen Dominguez and the interview that never needed to be”