Here is part 1 (AFC) of my two part NFL preview. I debated picking projected records, grading off seasons or just delivering instructions on how to knit a Bill Belichick Patriots cut off sweatshirt (to be used as bonfire kindling of course). However I eventually decided on general divisional ramblings based purely on biased opinion fact. If you don’t consider it relatively educational at least it will provide a quick fix for all of you NFL junkies craving the season to start. 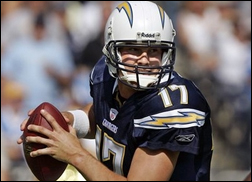 Can you believe the Chargers went 13-3 last year and finished on an 11 game winning streak? I couldn’t and it showed in my desire for the Jets to face them in the playoffs (and subsequently trounce them). The fact of the matter is that this Chargers team really isn’t that good. Their offense was dynamic because Phillip Rivers is an unbelievably efficient quarterback. Their defense, however, is very mediocre and probably leaning on the side of just being bad. They have trouble putting pressure on the quarterback, one of the reasons being Shawne Merriman’s struggle to return to form and their secondary’s soft zone.

People are quick to place blame on LT for their inability to establish a run game last year. However, their offensive line was one of the worst run blocking units in the league. And for someone who follows the Jet’s preseason camp like a fat kid anticipating the opening of the Pop Tarts store in Times Square, I know that LT definitely has something left in the tank. I’m not saying that rookie Ryan Mathews isn’t an upgrade (because he is) I just don’t think you can make that big of a push when your O-Line blocks as well as Antonio Cromartie uses protection. Did you really expect me to write a paragraph about the Chargers and not make a Cromartie joke? Throw in the projected season long hold outs of star blind side left tackle Marcus McNeil and number 1 wide receiver Vincent Jackson and this team is haplessly mediocre. But when you have one of the best QBs in the league and you play the Chiefs, Broncos and Raiders six times, mediocrity gets a slight boost. That’s why the Chargers are my pick to win the division somewhere around 9-7. 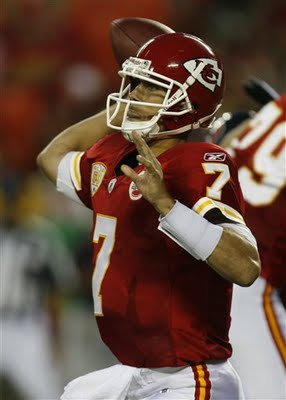 The cluster!@$%# that is the next three teams can pretty much finish in any order depending on a few things. Will the Chief’s hiring of former Patriots coordinators Fat Guy and Way Fatter Guy bring former Patriots glory to Kansas City? Probably not, because Matt Cassel is a UFL quarterback who only got a massive contract because he was given the opportunity to play a season in arguably the best offense of the last ten years. Watch him throw a football, he’s actually garbage. Hey, the Raiders have a new quarterback! Sure, he’s basically the definition of league average, but that’s like six billion times better than the fat, purple drank-ingesting excuse for a quarterback that they had last year. But this team still has a senile owner, no wide receivers, a bad offensive line and a defense consisting of 2.5 legitimate players.

What about the Broncos? There couldn’t be a better time for this team to take control of a terrible division. But is there any explanation to what McDaniels has done other than some millionaire Broncos hater bribing him to destroy the franchise? One of my friends from home is a die-hard Broncos fan. If I told him three years ago that their head coach would eventually drive Jay Culter AND Brandon Marshall out of town and in turn would draft a super religious option style quarterback with absolutely no ability to ever become a legitimate NFL quarterback in the first round of the draft, I don’t think there would be any hesitation in him punching me in the face and then spitting on me as I bled profusely on the floor. But wait…there’s more! When I finally got the bleeding under control, I would proceed to tell him that their best defensive player who led the league in sacks would miss the season due to injury AND THAT THEY GAVE KYLE FREAKING ORTON A 9 MILLION DOLLAR EXTENSION FOR NEXT YEAR (side note: I like Kyle Orton, but could you imagine how someone would react being told this 3 years ago?). Needless to say he would probably stop being a Broncos fan at that point.

So in conclusion, here is my projected order of the AFC West:

(But really, the order of 2-4 doesn’t matter since none of them are going to take the wild card spot).

Just as the West has one clear winner and 3 clear losers, the AFC East seems to be the mirror image (that means opposite right? I’m trying to say that they’re opposites). Frankly, I’m having trouble predicting how the Dolphins, Patriots and Jets are going to finish. However, I’m nearly 100% sure that the Bills are going to finish last. Boy, are they going to be terrible. Chan Gailey? Really? Your coach is named Chan? You have holes at nearly every position and you draft RB CJ Spiller in the first round? Really? Combined with the fact that they are switching to a 3-4 defense and are missing NFL level personnel at 5 of those 7 positions, I think it’s going to be a long season. Pencil them in for 2 wins and 0-6 in division. 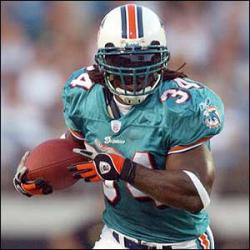 As for the other 3, I want more than anything to count the Patriots out. I love the off-season that the Jets and Dolphins had. I’m crazy biased for the Jets so I’ll stick to something reasonable and say that they’ll win around 10 games. Trust me, if I wanted I could write a 3,000 word essay on why I think they’re going to go 15-1 but I’d like to maintain some inkling of credibility with you folks. As for the Dolphins, they made some really great moves. Dansby and Marshall are some of the best players at their respective positions and will play huge roles in this team taking a step forward. If Ricky Williams and Ronnie Brown are healthy they will have an advantage in a division with not-so-great run defenses. The only thing that worries me is an inexperienced secondary that could prove costly in a league that is making a big shift to dominant passing games. The X-factor will be whether or not they can get consistent QB pressure allowing their below average secondary to get cheap turnovers and putting the ball in the hands of an offense that can maintain long possessions.

When looking at the Patriots, everything is pointing to a down year. Injuries for Leigh Bodden and Ty Warren weaken an already weak defense, not to mention the fragile state of Wes Welker’s knee. Logan Mankins is still holding out and this offensive line is not the same as it was when Brady threw all those TDs. The Patriots are still the Patriots, meaning I will never underestimate super cheater Bill Belichick. He’s just too good of a coach. Somehow, they’ll find a way to 9 or 10 wins and it will be crazy close down the stretch.

For the sake of giving some concrete prediction I think the division will end up like this:

(Can we combine all three practice squads to replace the Bills?)

But I wouldn’t be surprised if there was some serious parity in the top three pecking order.

Seriously, just how good is the AFC this year? The North is just another division with 3 really solid teams. That is, of course, if you consider the Bengals to be a really solid team. And although Jake Delhomme is clearly an awful quarterback that should have retired three years ago, he’s instantly better than even the combination of Derek Anderson and Brady Quinn. So is it possible that even the Browns could be better? Well they finished the season on a 4 game win streak to bring them to 5-11. If they think they’re getting more than that then they really haven’t learned anything from the Lebron James debacle. Cleveland sucks. The sooner that city realizes it the better (whoa that was kind of harsh. Just kidding you guys! I think I just really hate Eric Mangini). Seriously, can you fire that guy already? He is and always will be a secondary coach (and not even a good one). 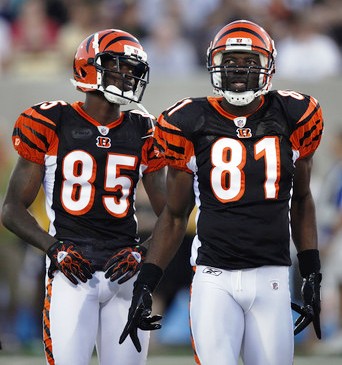 As for the top three teams in the division, I actually think the Steelers are the best team. If only their QB would avoid trying to rape girls in seedy bars in Georgia. Roethlisberger’s 4 game suspension will make or break this teams overall record. If they go 0-4, they will be struggling to right the ship and make the playoffs. If they can salvage 2-2 or better, I think they have a good shot to win the division. As for the Ravens, they are the trendy pick to take the division and possibly the conference. Solid defense, great offensive line, dynamic running back and a rising star at QB. If Anquan Boldin stays healthy we can expect big things from their passing game. People are reluctant to give in to this teams new pass first identity. But face it folks, they don’t rely on their defense and run game like they used to. They will make the playoffs, but I don’t see them going too far. Flacco hasn’t proved that he can play in big games and their secondary is too vulnerable going up against good passing offenses. But this team has a good young core and should be hanging around the top of the division for a while.

What about the TOchocincos…I mean the Bengals? This team would kill it on VH1 but they’re not that great of a football team. They overachieved in the regular season and it showed in their final two performances against the Jets. Carson Palmer just isn’t the Carson Palmer of old and for some reason I think someone (whether it be Palmer or the team) is trying to hide his elbow injury that will definitely come into play this year. In 13 games last season, Cedric Benson rushed 301 times. He’s just not a guy who’s going to be able to carry a heavy workload two years in a row. Pencil them in for mediocrity, losing some close games and their WRs getting testy when they realize their QB can’t make the throws they want.

If it wasn’t for the Big Ben suspension I’d have the Steelers on top, but here’s how I think the division will probably play out: 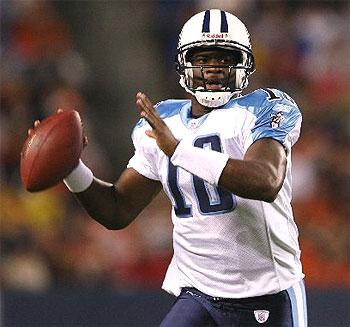 Frankly, it’s a pretty boring division. The Colts are great and are going to win it. The Jaguars are terrible and are going to come in last. The Texans have a great offense and could win 10 games. The Titans have Vince young and could win ten games (but they also have Vince Young, which means they could lose 10 games). I don’t think the Texans or the Titans are good enough to take a wild card spot away from the East or North. I think the Texans have the best shot if all their offensive weapons stay healthy and they get some return from their defense. Maybe if they can take a page out of the Saints book and get a crazy amount of turnovers we’ll see them in the playoffs, but I just think it’s too many “ifs” to materialize.

The more things change, the more they stay the same, and the order shows it in this division:

As much as I hate Tim Tebow, the Jags have to be killing themselves about not drafting him right? Regardless of whether he’ll be a good QB (he won’t) how do you pass up on a chance to sell a crazy amount of jerseys and to sell out every game he plays in (which will happen when they finally bench David Garrard). Just get these guys out of Jacksonville and give Los Angeles a team already.