Here’s part 2 of my NFL preview. To see part one click here. 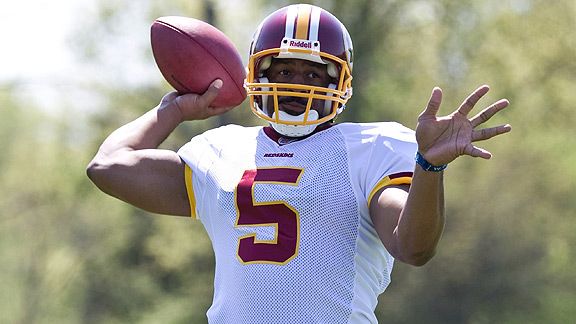 Gotta be the best division in football, right? We’re going to see at least one wild card come from here and it really wouldn’t surprise me if they got two. As for the order in which they finish, I’m sort of stumped. Lets start with the Redskins, because I’m relatively confident they’re going to finish last. Mike Shanahan is a good coach. But even he isn’t going to be able to get anything out of this offense. And I really feel bad for McNabb. For years he got the shaft in Philly, throwing to nobodies like Greg Lewis and Todd Pinkston. Wow, Todd Pinkston…haven’t heard that name in a while. So what happens when he finally gets a legit receiving core? They ship him off to Washington, where he gets to throw to…Santana Moss? And Clinton Portis is going to carry a full rushing load? This offense is going to be terrible. And of course, the blame will be placed on McNabb. The guy seriously can’t catch a break. As for the defense, they were surprisingly good last year. I’m always skeptical to trust a team that is switching schemes though as it usually takes at least a year to get the right personnel and learn the system. And with everything that’s going on with that nut job Haynesworth, I have a feeling that they’re going to regress a bit. Playing the Cowboys, Eagles and Giants makes me think that they’ll be lucky to finish with 6 wins.

As for my pick to win the division, I’m going a little outside the box. For some reason, I really think the Giants will end up on top. And I know what you’re thinking… “Look at this New York homer, have some respect for yourself, kid.” I may well be a homer, but I HATE the Giants. I hate their fans, I hate their coach and I bask in every game that they lose. But why doesn’t this team improve from last year? They have slow, less than talented linebackers. But I think they can make up for that with an above average pass rush. Getting Kenny Phillips back is huge and adding Antrel Rolle makes this a pretty legit secondary. Their offensive line isn’t the offensive line of two years ago, but as long as they remain intact, their running game will get a boost from a healthy Jacobs/Bradshaw 1-2 punch. Throw in a little excitement from a new stadium and I think we have ourselves a division winner. 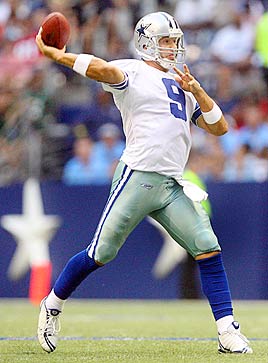 The Cowboys and Eagles are good, but they both have question marks that will keep them from taking the East. I still think that one, if not two can make the playoffs because of how weak the NFC is, but I think the Division is the Giants for the taking. Cowboys are still led by a guy named Tony Romo, who has a pretty decent history of stinking up the joint when the games matter. People love to jump on this bandwagon. And when people start talking, they overlook a lot of negatives thinking that the team can make up for it in other ways. So they see something exciting like Dez Bryant (who I think is going to be great) and neglect to mention that their defense really isn’t good. Go back and watch some of the touchdowns that Miles Austin scored last year. It wasn’t because he was making amazing catches and completely blowing guys out of the water. A bunch of them were due to TERRIBLE tackling and some bad coaches not recognizing that Roy Williams is a dead fish. A questionable o-line doesn’t help a team that is really going to rely on their offense to beat people. I expect 9-11 wins, but an early exit from the playoffs…like usual.

The Eagles are another team that people are really high on, but I just don’t see it. Does the team get better with Kevin Kolb? I’m reluctant to trust a first time starter and there are certainly going to be costly mental mistakes as the year goes on. Is LeSean McCoy actually good? I hope so, because he’s on my fantasy team, but he’s certainly no Brian Westbrook. Their offensive line is below average and Andy Reid still refuses to run the ball. How long is it before a team realizes that all you need to stop DeSean Jackson is to play a safety over the top? The defense is okay, but nothing special. Although as a Michigan man I’ll tell you that Brandon Graham is the real deal. A definite sleeper for defensive rookie of the year on a team that will need all the sacks they can get. Again, I think there is potential for 9-11 wins like the Cowboys, but I imagine it will be on the lower end of that range. With that, my final order is: 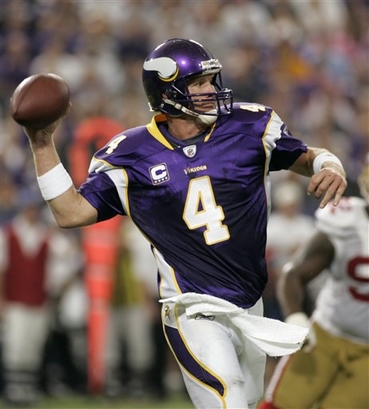 Its funny how quick people are to write of the Vikings after a couple injuries. But the sad truth is that it comes down to the performance of one player. FAVRE FAVRE FAVRE FAVRE FAVRE FAVRE FAVRE FAVRE FAVRE FAVRE FAVRE FAVRE. This is a very well put together team. A defensive line that creates serious pressure and stops the run allows for turnovers and short possessions. A great offensive line and arguably the best running back in the league means that there is going to be space to throw the ball deep. But the word on the street is that Favre’s ankle is in pretty bad shape. And with Brett Favre you get a lot of things, and one of those things is his consecutive games record. And Brett Favre IS NOT A TEAM PLAYER. So unless his ankle is literally falling off, he’s is going to be out there on the field. So you must be thinking to yourself, “well isn’t that a good thing? Don’t I want Brett Favre out there all the time.” IF he’s healthy, then yes, but when his ankle is really bad and he’s having trouble stepping into his throws and moving around the pocket, he’s no longer Brett Favre. And as a Jets fan, something like this is a sensitive subject. Because we were 8-3 and leading the AFC East two years ago before Brett Favre tore his bicep. But Mangidiot, in his Bill Belichick copying ways kept that hush hush. And Favre played through it, even though he had no business doing so. So we finished the season 1-5 and missed the playoffs. Would we have won with a backup, maybe, maybe not. Did Mangini’s firing allow us to get Rex Ryan, the greatest coach ever? Yes (and thank god for that). But what I’m trying to say is that the Vikings, barring an extremely, extremely serious injury, (which remember, hasn’t happened to Favre in 20 years of playing) are stuck with Favre in whatever physical state he is in at the time. And this is going to cost them their division this year as I think they will finish in second and out of the wild card.

The team that takes the North is the Packers. With Aaron Rodgers behind center this offense is arguably the best in the league, on par with the Colts and the Saints. And although the defense got a few more turnovers and defensive touchdowns then they are likely to get this year, they are further along in their switch to the 3-4 which means there will be more consistency. Considering they finished 11-5 and lost 2 games to the Vikings I think there’s a definite shot of at least 12 wins. 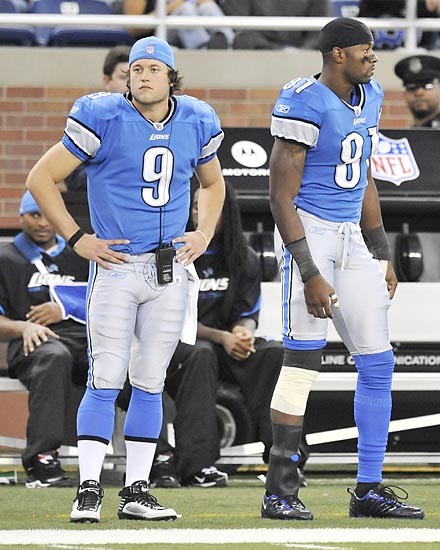 Of course, right when I leave the state of Michigan, the Lions start to get good. Don’t get me wrong, it was nice when the local team was blacked out every week because it meant a chance at seeing a better game, but I always sort of felt bad for the Michiganders. The state was already in such disarray, couldn’t they at least have a capable football team. Well this isn’t quite that team yet, but it will definitely be fun to watch them try. They are going to be in a lot of shoot outs. Their defense, more specifically their secondary is AWFUL. But with Matt Stafford, Calvin Johnson, and Jahvid Best, they are going to put up points. Surprisingly enough, I even think that they can finish ahead of the Bears. How does Mike Martz keep getting hired? Let’s say that I told you to bet your mortgage on the Giants beating the Patriots in whatever Super Bowl that was. You win a truck load of money and in turn trust me to fulfill your betting fix. But then, for the next two years I let you down. I’m talking about rocking a 30% winning percentage for 3 straight years. At this point, you’ve lost everything you won in that Super Bowl, plus a little more. Listening to my advice in predicting the next Super Bowl winner is equivalent to people thinking that Mike Martz is going to help this Bears team. Here’s a great strategy…let’s have Jay Culter throw 50 times a game and take as many 7 step drops as possible. What’s that? His wide receivers are Johnny Knox, Devin Aromashdu, and Devin Hester? Perfect! Throw in some brutal weather at the end of the year and a defense that was at it’s peak 4 years ago and we have the makings of a 5 win team.

So here’s the order for those of you who would prefer not to read all of my nonsense above: 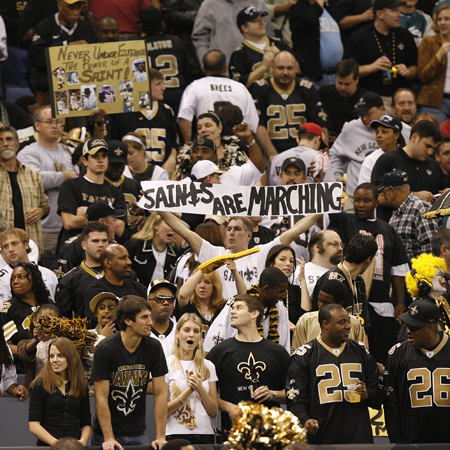 I’m giving you a small reward for reading 1500 words of my NFC preview. These two divisions are terrible and there are a max 3 good teams so I figured I’d keep it succinct. The Saints are the Saints. Meaning they will throw a ton, score a bunch of points and probably force some turnovers when you try and play catch up (although not as many as last year). The Falcons get back a healthy Michael Turner and with that kind of running game, a little improvement from Matt Ryan and a easier schedule the Falcons will have a chance of making the playoffs, although will probably come up just short. The Carolina Panthers will run all over you, but they wont do much else. They’re not particularly good or bad and will probably end up a shade below .500. The Bucs suck. Sorry, Tampa fans.

The West is terrible. People like San Francisco, because there really isn’t anything else to like. But their QB is Alex Smith and we all know that guy’s ceiling. The defense was solid led by Patrick Willis, but getting to play the Cardinals, Seahawks and Rams six times will have a bigger impact on why their record looks respectable. The Cardinals lost Kurt Warner and Matt Leinart. Which leaves…Derek Anderson. Unless they decide they want to run the ball 40 times a game, there’s no way they’re winning more than 7 games with Derek Anderson slinging the ball around. Slinging is probably the wrong word. Let’s going with “inaccurately lofting.” Finally, the Rams suck and the Seahawks suck. I’m really hoping for the winner of the division to be 7-9, that would be so cool (and so frustrating for the team that just misses the wild card).

Final orders are as follows: