Bill Nunn as Radio Raheem in Do The Right Thing

Years ago, my old college roommate and I would make regular trips to the local record store to see what was on the shelves.  This was back in 1990 when people still bought compact discs.  Gainesville’s Hyde ‘n’ Zeke’s was the place to find them cheap.

At that point in time, I was over the pablum sound of the Eighties and was eager to delve into whatever funky stuff I could get my ears on.  One afternoon, I saw a used copy of Public Enemy’s “Fear of a Black Planet” and decided to give it a try.  I forget exactly who had recommended it but I picked it up nonetheless. 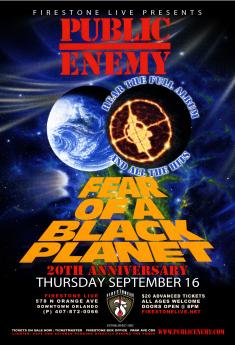 It was the first rap album I had ever purchased.  I was familiar with a lot of early hip-hop and while I found some of it auspicious, most still sounded tinny and in my mind, lacked substance.

So there we were. Two white, college kids walking home one day with little did we know would be two seminal pieces of hip-hop history, NWA’s “Straight Outta Compton” in his hand, Public Enemy’s “Fear of a Black Planet” in mine.  An unlikely image until you consider that it’s mostly white kids who buy hip-hop albums anyway.

We were about to be enlightened.

I don’t want to say the album changed my life.  I’m not sure that any album ever really has.  Let’s just say I logged a LOT of hours listening to it.

With every press of the play button, I heard a different sound, a new sample.  “Rewind that!  Did you hear that?” we’d ask each other.  From James Brown to Parliament, Richard Pryor to Eddie Murphy, Martin Luther King, Jr. to Desmond Tutu, Public Enemy’s ‘wall of sound’ always meant a new discovery.  Their sound was full; their lyrics profound and direct.

For twenty years, I’ve rocked to that album.  I acknowledge it’s not for everyone but its impact on hip-hop is undeniable.  So when I heard Public Enemy was touring to celebrate the album’s 20th anniversary, resistance was futile… plus this hot chick bought me a ticket.

The crowd inside Orlando’s Club at Firestone that Thursday night was as diverse as you’d expect.  Concert-goers ranged from grungy, tattooed white kids to older, bow-tied gentlemen from the Nation of Islam.  There’s no way Public Enemy could ever have guessed “Black Planet” would have such reach… and longevity.

After much anticipation, and a few double vodka-Red Bulls to boot, the band hit the stage around midnight.  One gentleman in a Legends of Hip Hop shirt brought an old school boom box to the front of the stage and waved a cassette tape in the air.  The crowd cheered, knowing Chuck, Flav and the gang were only a few moments behind. 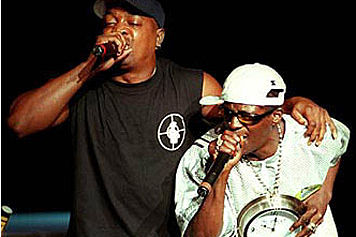 He popped in the cassette and out blared the opening track of the album, “Contract on the World Love Jam.”  It was a song I had heard a thousand times before, but this would be the last time I would hear it without ever having seen Public Enemy in concert.  Out marched the S1W’s, Public Enemy’s military-uniformed dancers.

Out bounced both Chuck D and Flavor Flav to “Brothers Gonna Work It Out.”  The crowd went wild.  There are few thrills in life like the moment you first see a band perform a song that you’ve memorized verse for verse, beat for beat.

“We’re gonna do a song that you’ve never heard before,

Make you all jump along to the education…

As you raise your fist to the music,

Together we can stand tall.”

After the track, Flav revealed the clock around his neck – to always remind people what time it is – while Chuck wore a tank top, camouflage shorts and his traditional Pittsburgh Pirates baseball cap, the most intimidating person to wear one since Dave Parker.

That night, P.E. performed for two full hours, playing every hit imaginable.  They cranked out “Bring The Noise,” “Can’t Truss It,” and “By The Time I Get To Arizona,” but the evening was more about honoring “Fear of a Black Planet.”  Flav killed with “911 is a Joke.”  D ran though “Burn Hollywood Burn.”  And of course there was “Fight the Power,” the song that served as a backdrop for Spike Lee’s “Do The Right Thing.” 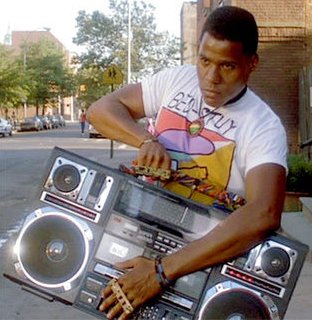 Looking at them, you’d think Chuck D and Flavor Flav would be the least likely guys to form a successful rock group, Chuck all serious, introspective and militant, Flav more clownish, a parody of himself.  But before you think of Flav as merely a hype-man, there was one part of the show where Flav sat behind his drum set (yes, this concert had live musicians) while Chuck rapped over his beats.  Hip-hop might not be for you but these two are as influential as any duo in American music history.

Someone once said that listening to Chuck is like listening to your grandfather rap to you.  That’s not far off.  He’s preaches poetic.  And Flav?  Well, let’s just say the contrast works wonders.

Over the years, Public Enemy has never compromised their art form.  In this day and age of more and more bands sounding the same, there is no mistaking the sound, or message, of Public Enemy.

If “Fear of a Black Planet” meant even half to you what it did to me, I definitely recommend you check out the show when they come to a town near you.  Come prepared to dance, sing, shout, pump your fists and appreciate one of the truly unique acts in hip-hop history.