Following in the embarrassing footsteps of Eugene Robinson, Eddie Murphy and Hugh Grant, David Beckham has become the most recent star to be accused of attaining ahem… “hired help.” 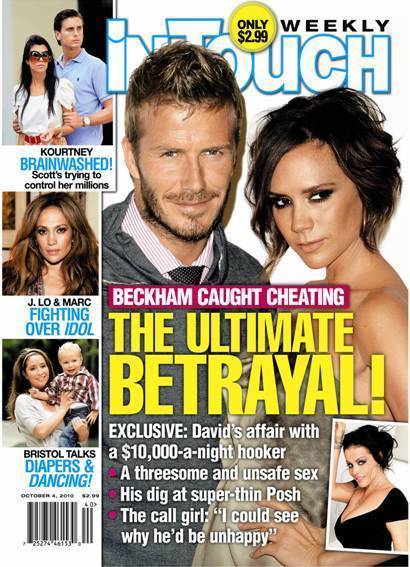 In response to an In Touch Weekly article, which accuses one of the world’s most recognizable athletes of sexual infidelity, Mr. Beckham has allegedly given his attorneys a blank check to clear his name.  Let’s hope he didn’t mimic Jerry Springer and hand over one of those very same personal checks to his high-dollar, business associate.

Whether or not these accusations are true, this story is still quite amusing… to everyone except Posh Spice, of course.  Either a Beckham-obsessed female posed as a call girl and publicly accused the soccer star of paying her five figures for sexual favors or Beckham actually paid ten grand to get laid, giving the phrase “Bending it like Beckham” a whole new meaning.

A few things surprise me here… and one of them is not that Beckham would cheat on his wife.  I was always more of a Baby Spice fan anyway.  Everyone’s body is a temple but Mrs. Beckham’s appears to be renovated monthly.  Her plastic surgeon is aware that breasts are supposed to be soft, right? 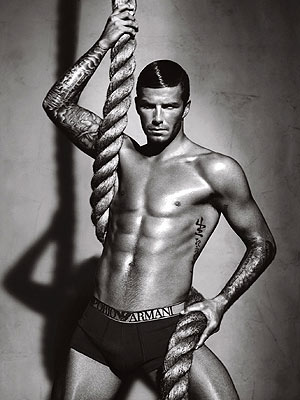 Isn’t Beckham one of the world’s best looking dudes?  The guy’s a supermodel.  Couldn’t he pretty much bed just about any female around?  So why the need for ten grand?  Ask Tiger Woods about what good hush money does.  Wanna be bold, David?  Have a woman pay YOU for sex.  Now that’d be cool.

Beckham’s alleged mistress, Irma Nici, said the sex lasted about fifteen minutes, and rated it a 7.5 out of ten.  You’d think for ten K, he could have gotten a little more bang for his buck… and a few more stars to boot.  If he had only coughed up a few hundred, don’t tell me she wouldn’t have given him a lower rating?

Speaking of a one with four zeros, if Beckham is going to continue on his alleged shopping spree, can the Tampa Bay Rowdies looking into signing him to a contract.  We could introduce him to some of our ‘friendlier’ local establishments to jumpstart the economy.  Ten grand would be just about enough to buy the remaining, unsold Buccaneers tickets so we can finally watch them on TV.

Has Nici’s pimp surpassed Steve Williams, Tiger Woods’ caddy, as the man who pockets more money for doing as little work as possible?

None of the major sporting outlets, ESPN.com, CNNSI.com, Foxsports.com, have yet to report the alleged details of the Beckham case but fortunately sportschump.net doesn’t have to answer to a higher authority.

And once again, it appears I have chosen the wrong profession.