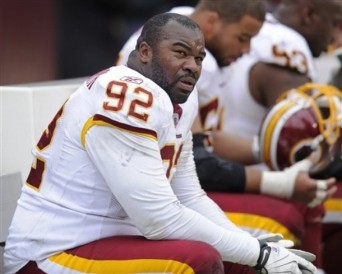 The least hard-working man in show business is at it again.  Just when we thought the Albert Haynesworth saga couldn’t get any more draining, the heaviest hundred million dollar man in sports came up with another gem of a soundbite.

For those of you unfamiliar with Mr. Haynesworth’s resume, let us review.  After attending the University of Tennessee, he was drafted fifteenth overall by the Tennessee Titans.  After a few successful seasons, many were quick to call him the best defensive tackle in the league.

After making consecutive Pro Bowls in 2007 and 2008, Haynesworth became a free agent.  The Redskins signed him to a record $100 million contract.  Since signing that contract in 2009, he has failed to live up to expectations, making Allan Houston and Grant Hill deals look like sound investments by comparison.

This off-season, he arrived to training camp overweight and disgruntled.  And on a recent local radio show, Haynesworth came out with this blast about the very organization that made him rich:

“Just because somebody pay[s] you money don’t mean they’ll make you do whatever they want or whatever. I mean, does that mean everything is for sale?  I mean, I’m not for sale. Yeah, I signed the contract and got paid a lot of money, but … that don’t mean I’m for sale or a slave or whatever.”

Wow, where to begin?  As one SportsChump subscriber pointed out “Like the world isn’t already polluted enough without that bullshit.”

Look, I’ve had a number of shitty jobs and even shittier bosses but I was always grateful for the opportunity.  I wasn’t blessed with the skill set to play professional sports and I have never had the good fortune of making six figures, never mind eight.  (Memo to self: call Irma Nici’s pimp for possible side work.)

You’re right, Albert. The Washington Redskins don’t ‘own’ you, but as your employer, they do expect you to do as you’re told, just like every other boss since the history of time.

While attending classes in Knoxville, did you by any chance to sit in on an American history or civil liberties class?  Comparing your plight to the most vile period in our nation’s history diminishes the immeasurable suffering of previous generations and will only further alienate the fan base you’ve already lost.  Are you listening, LeBron?

Don’t get me wrong.  Albert Haynesworth has every right to speak his mind.  We also reserve the right to judge him for his stupidity.

The best team in the American League has had a difficult time drawing fans lately.  In the Tampa Bay area, there have been a number of excuses for poor attendance: stadium location, depressed local economy, uncommitted fan base, below-average ballpark accommodations.  But one thing Rays fans can NOT complain about is the performance of their home town team.

One day prior to clinching their second playoff spot in three years, Rays’ all-star third baseman and face of the franchise, Evan Longoria, spoke out in response to the empty seats. 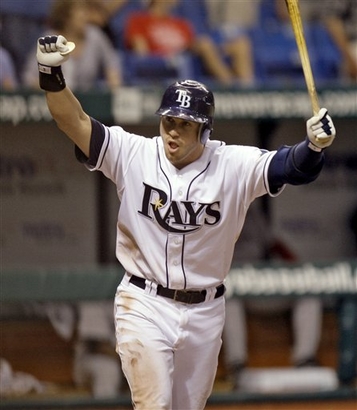 “I’m not trying to take a low blow at the fans. I’m actually trying to rally the troops and get more people in here.  I’m not trying to say that we have bad fans or any of that because, believe me, I’ve been here since ’06 and I love the Tampa Bay community. It’s just tough to see, and I felt I was the right guy to say it.”

He went on to say…

“It’s disheartening,  It’s something I’ve been wanting to say for a long time. It’s not a jab at the fans. It’s not a kick below the belt, but it’s something we’d like to see. Obviously we want to bring a championship to Tampa.”

Local radio personalities and journalists have since blasted Longoria for speaking his mind.  Personally, I commend him.

In this day and age of athletes’ loyalties going only as far as their next paycheck, I actually found Evan’s comments refreshing.  This is a guy, one of the best players in the league, who signed for considerably under his market value because he wanted to stay put.  His name is never seen on any police blotter.  With rumors running rampant that Tampa will cut its payroll in half next season, this might be his only chance at a World Series title.  Longoria was just venting.  If you painted a masterpiece, wouldn’t you want everyone to see it?

Shortly after Longo’s comments, the organization did its best to squash the heat he (and pitcher David Price, who Tweeted similar comments) created. They gave out 20,000 free tickets to their final home game of the season and had almost 37,000 fans show up as a result, filling the stadium.

I appear to be in the minority here but I felt Longoria was just doing what he thought was his part.  Superstars are vocal.  Superstars are leaders.  Do you think Michael Jordan would sit idly by if the Chicago Bulls were at half capacity in their heyday?

Were Longoria’s comments insensitive to an area who’s currently suffering?  Perhaps.  Is he out of touch with the common man?  Maybe.  Could he have donated a portion of his salary to get local kids into the games?  Sure.  But what’s worse, having your team’s best player speak out or having him remain perfectly silent?

While the community remains in disagreement about where and whether a new stadium should be built and more importantly, who will pay for it, there is one thing Tampa Bay can definitely agree on.  Their team might just be the best in baseball.

Longo wants to win.  He wants the support of his community and even though he might be the richest person living there, there’s nothing inherently wrong with him speaking his mind.

Who knew we were in the middle of a mosquito crisis?

On a pleasant Sunday drive through Florida’s beautiful Pasco County, I discovered that the Sunshine State’s mosquito problem has gotten so out of hand, we need an elected official to help rid of us this plague.  Enter Jessica Jordan Griffin, who is running for Mosquito Control Commissioner. 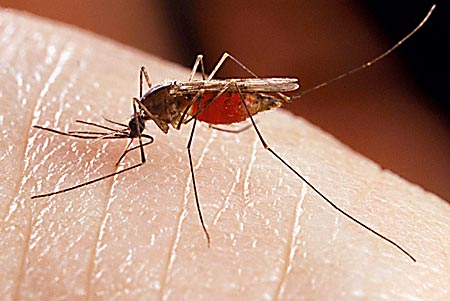 Nothing against Mrs. Griffin.  I’m sure she’s a wonderful person and will probably make a better Commissioner than Bud Selig, but she had campaign signs literally littered for miles.  Her political propaganda far outnumbered any mosquitoes I encountered.  Perhaps the little bloodsuckers are already running scared.

That got me thinking.  What inspires someone to make it their life’s work to ridding the planet of a particular insect?  Does Mrs. Griffin hate mosquitoes any more than your average citizen?  Did a band of rogue mosquitoes destroy her home town?  What’s her campaign slogan?  Griffin: When Calamine lotion just ain’t cuttin’ it?  And are those buzzing electric lamps not doing the trick?

Look, I don’t mean to make light of an issue that is apparently affecting thousands of residents state-wide.  I’m not a fan of mosquitoes. I don’t know anyone who is.  But our tax dollars at work?  I think I’ll just opt for the Off!

More power to Mrs. Griffin.  I wish her the best in her political endeavors.  And if she does become next Mosquito Gestapo, at least I’ll know who to call next time I get bit.

25 Replies to “They said what?!? Albert Haynesworth on the Redskins, Evan Longoria on Rays fans and an end to our mosquito crisis”