I was putting the final touches on a masters thesis I had no interest in writing.  I was equally uneager to see what the real world had to offer in terms of employment. While those were better economic times, I was pretty sure an 85-page expose on intellectual property rights and U.S.-Brazilian trade was not what I wanted to do with the rest of my life.

Sports was a lot different back then.  Michael Jordan had retired from the NBA, the Cowboys and 49ers were both good, nobody knew baseball was awash with steroids (wink, wink) and Brett Favre’s penis was not a matter of public discussion. 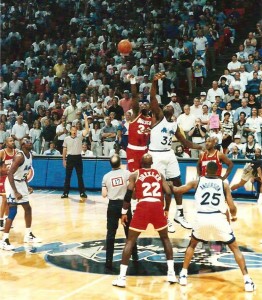 Jordan’s temporary hiatus from the league meant other teams actually had a chance to win a title.  The Houston Rockets, featuring the perpetually underrated Hakeem Olajuwon, along with Clyde Drexler, Kenny Smith, Mario Elie, Vernon Maxwell, Sam Cassell and Robert Horry, represented the Western Conference in that year’s NBA Finals.

The Eastern Conference’s best team that year was the Orlando Magic.  Those living in Florida at that time, including myself, actually felt the upstart team comprised of Penny Hardaway, Shaquille O’Neal, Dennis Scott and MJ’s former teammate Horace Grant, stood a shot in that series.

But this post is not meant to be a recap of the series.  It is, as the title mentions, another SportsChump brush with greatness.

As I mentioned earlier before I got sidetracked by NBA Finals trivia, I was about to graduate with a degree in political science/Latin American Studies, even though my first love was, and remains, sports.

I had a relative who shall remain nameless for he still feels guilty about pulling strings to get me Finals tickets. At the time, he worked for a company which had ties to the league.  Since my ex-girlfriend’s birthday coincided with the night of Game One, what kind of loving, caring and considerate partner would I be if I didn’t get her the best possible tickets available?  I was only thinking of her, I swear.

There we sat.  Fifth row.  Dream come true…. for one of us at least.

The seats were so good, we had better tickets than the Commissioner. 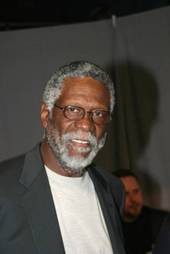 I was giddy, way more so than the birthday girl, when I looked over my shoulder and saw David Stern sitting alongside NBA legend Bill Russell only two rows up.

Since the NBA at that time was expanding in all different directions internationally, I figured my passion for the sport, my background and my degree in Latin American Studies made me a perfect fit to work for the Association.  I would become the league’s ambassador abroad, the man responsible for bringing the first major American sports franchise south of the border and the eventual heir apparent to David Stern. A wing in my honor would be built in Springfield, Massachusetts without ever having played a minute in the league.  Mine was a flawless plan.

I suggested to my date I should approach Stern about a job.  The ex knew me well and said I didn’t have the gumption to go through with it, although gumption wasn’t exactly the term she used.

Before she could doubt me any further, I was out of my seat and shaking hands with Power Jew himself, Commissioner Stern.

In seconds flat, I reviewed my resume, told him I was trilingual, graduating with a masters degree from Florida and wanted nothing more than to be a part of NBA expansion.  Within minutes, he had sent one of his NBA reps down to my seat to give me his business card.

Well, as you can see, things didn’t work out, maybe for the better, for if I currently worked for the league, I wouldn’t be able to speak my mind as freely as I do here.  Besides, another close friend and loyal sportschump reader knew someone who worked there and called it a sweatshop.

The league is doing just fine without me (matter of opinion) and I’m still watching religiously with no hard feelings.  But my absence is clearly the reason there’s not an NBA team yet south of the border.  I’m not pointing fingers… or am I?

Until we meet again, Mr. Stern.