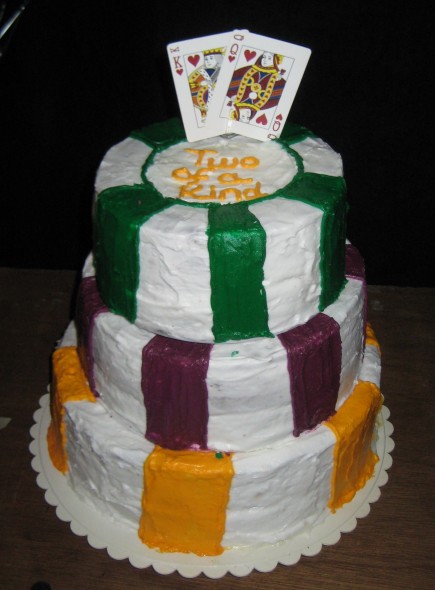 This Saturday, I traveled to Gainesville to witness the marital vows of an old poker buddy, so before we even start talking about sports, I’d like to extend my most sincere and heartfelt congratulations to Damion 2.0 and his beautiful bride.  Thanks for one blast of a weekend… and once again, you’re welcome for the lap dance.

Since we were busy celebrating matters of the heart, sports obviously took a back seat, although like any good Gator fan, Damion did strategically plan his wedding on a bye week.

A few key events, however, did catch my eye.  After playing with fire for so long, it was nice to see the LSU ‘Paper’ Tigers finally lose a game.  This could have easily been their fourth loss of the season.  Oklahoma was also knocked from the ranks of the unbeaten.  Brock Lesnar’s face got bloodied up pretty good, but not by me, as the title of this post suggests.  The Giants beat the Phillies to advance to the World Series and, since I was out of the immediate Tampa Bay area, I actually got to watch the Bucs play a home game on television.

A few chumpservations on the weekend that was….

The Best Team in the NFC?

The Bucs eked out an exciting, although painful to watch, last-second victory over the visiting Rams.  Tampa is now 4-2, in second place in their division and according to Raheem Morris, “the best team in the NFC.” I guess Coach Morris has watched as much Bucs football as the rest of Tampa Bay, for you’d have to be either delirious or extremely uninformed to call his team the best in the conference. 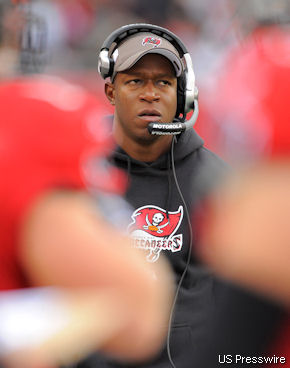 The Bucs rank 30th in the league in total points, scoring only ten touchdowns in six games, and despite their winning record, have scored 30 fewer points than their opponents.

Want the Bucs offense in a nutshell?  On their second offensive possession, after forcing a Sam Bradford fumble near the Rams goal line, they suffered consecutive penalties and a sack on Josh Freeman to give them third and goal from the St. Louis 35!  Within seconds, they had moved thirty yards IN THE WRONG DIRECTION!  I guess the NFL is doing us a favor by not putting them on TV.

While I congratulate them on their winning record and I’m normally a glass-half-full kind of guy, nobody in their right mind, other than their head coach, thinks this is a playoff team.  I’ll apologize in December if I’m wrong.

Brock Lesnar got absolutely pummeled by Cain Velasquez Saturday night in one of those would-you-just-call-it-already-so-we-don’t-have-to-see-any-more-bloodshed type of fights. 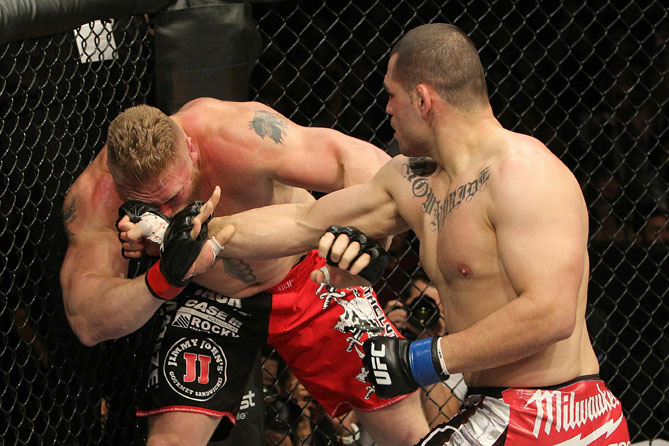 Fair or not, mixed martial arts will always be compared to boxing for the sheer brutality of their sports, which got me thinking… other than the belts around their waists, which never seem to stay around very long, how will future generations view MMA champions?  We laud figures like Rocky Marciano, Joe Louis and Muhammad Ali as part of our history but how will we remember those who paved the road for MMA?

MMA fighters lose.  All it takes is one good shot for a career blemish… and a mightily bloodied nose.  It seems impossible for even the best fighters to avoid the loss column for very long.

Rocky Marciano finished his career 49-0.  Joe Louis was 65-3.  Lennox Lewis retired at 41-2.  Randy Couture is considered one of the greatest mixed martial artists ever and he’s 19-10.  Chuck Liddell is 21-8.  After this weekend, Lesnar is 5-2 and many thought he might become one of the sport’s greatest.

Velasquez remains undefeated after nine fights yet how long until he gets beat?  Maybe it’s unfair to compare MMA to boxing after all.

With no top-ranked team able to hold on to #1 for very long (see Alabama, Ohio State, Oklahoma), undefeated Boise State remains the kid outside the BCS candy shop with his nose pressed up against the window. 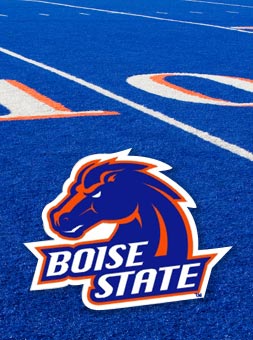 The main argument for ranking the Broncos no higher than third is that they play in a weaker conference against inferior opponents and that if they played in either the Pac-10, Big Ten, Big 12 or SEC…. bla, bla, bla.  While that’s a valid argument, there should be no doubt that Boise State can beat any school in the country on any given Saturday.  They just won’t be given the chance… and their time is running out.

Top-ranked Auburn has only four games remaining, one of them against Alabama.  Second-ranked Oregon has a considerably easier schedule, playing only one ranked team the rest of the way out.  And people complain about Boise’s easy schedule.

As always, the season will play itself out but it appears voters will do everything possible to keep Boise out of the championship game.

Both the Yankees and Phillies, once thought to be the best two teams in baseball, are watching the World Series from home, or Cabo, or wherever multi-millionaire athletes go when their seasons are over. 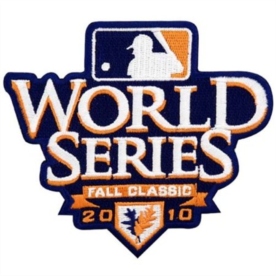 The Giants-Rangers Fall Classic starts Wednesday, to the shock of everyone except a friend of mine who placed a Nostradamus-like future bet on San Francisco to win the National League SIX MONTHS AGO!  Nice work, Croshere.

The Giants and Rangers have the 10th and 27th highest payrolls in baseball, proving it’s not about how much money you spend but how you spend it.

While the Rangers feature Josh Hamilton, Vlad Guerrero and Cliff Lee and the Giants have Tim Lincecum and a bunch of up-and-coming stars, most think this World Series won’t draw ratings.  Even though these two teams represent the nation’s fifth and sixth biggest television markets, with both the Rangers and Giants residing west of the Mississippi, will the casual fan on the East Coast tune in?

As I watched an aging Brett Favre walk off Lambeau Field, hugging former teammates in the final football game of the weekend, I couldn’t help but see the similarities in my returning to Gainesville and seeing so many old friends.  Of course I didn’t fracture my ankle, nor do I wear Wrangler Jeans, but other than that, the instance was remarkably similar, I promise.

JD, McDiesel, Martina, Puckett, Fritchie, Boston and Damion 2.0 are friends with whom I logged MANY a drunken hour hanging out, playing poker and just shooting the breeze.  Although it had only been a year since I had seen many of them, that didn’t stop any of us from wanting to set up a poker table smack dab in the middle of the reception hall.  We didn’t, of course.  None of us wanted to be responsible for causing the shortest marriage in history.

So once again, a hearty congratulations to all the winners this weekend:  Cain Velasquez, Tarvaris Jackson, the Auburn Tigers, the Bucs, Giants, Rangers and of course, the newlyweds.