So I need to vent about Brett Favre. I can’t stand this guy and I’m sure most of you can’t either. 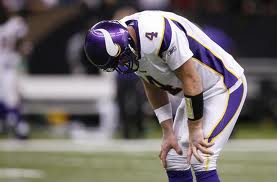 It’s really embarrassing how big of a joke that Monday Night telecast was. Every great throw that Favre made, Collinsworth and Michaels were so quick say something like, “So much for that elbow problem!” Yet after every dumb interception or overthrown pass, they would cut to him rubbing his elbow or limping over to the sideline or make some idiotic comment about how it was Harvin or Moss’ fault. Let’s completely ignore the fact that Favre was so over-the-top when it came to milking those injuries.

I’m not in his body; I don’t actually know how he feels. He has a legitimate foot injury, I think we can all agree on that. That’s fine, people get hurt, and that’s what happens in football. With that said, DON’T PLAY IF YOU ARE HURT.

It drives me crazy that nobody talks about when Favre was on the Jets. When he’s healthy, he’s an amazing quarterback. Did you see the numbers he put up last year!? But when he’s hurt, HE’S GARBAGE! Two years ago, Favre was playing some ridiculous football with the Jets. At the high point of their season, the Jets were 8-3 and in first in the AFC East. I can’t even begin to explain how amazing this was as a Jets fan. We were ecstatic! We were ahead of the Patriots AND we had a hall of fame quarterback. After their win over the first place Titans, something went wrong in the home loss to the Broncos. I was at the game and remember thinking to myself that Favre seemed off. He wasn’t attempting the long bombs he threw at the beginning of the year and he didn’t have the same zip on his passes. No matter, it was just one game and the Jets were sitting pretty with an easy schedule to finish the season playing the bottom of the NFC West. But the season didn’t end well. You can all probably remember the story. The Jets finished the season 1-4 and missed the playoffs 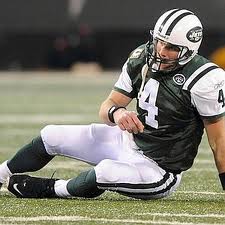 *Side tangent: the one win was against Bills where instead of running out the game clock, they elected to attempt a pass with JP Losman (you don’t hear that phrase much anymore). He was sacked, fumbled and the Jets returned it for an improbable TD to win. I was driving, on my way home from Michigan listening to the game on the radio. Needless to say I almost careened into the cement siding on the GW Bridge.

The traditional media (AKA beat reporters) had their story written for them. They blamed it on the Jets being unable to win on the West coast against crappy teams like Oakland and San Francisco (because of long flights? Really?) They wrote things like “Favre’s magic has run out.” Really? I must have missed the draft when the number 1 pick was a QB who cast spells to get the ball to his wide receivers.

In reality, there was a very tangible reason as to why the Jets finished the season that way. Brett Favre TORE HIS BICEP IN HIS THROWING ARM! WITH 6 GAMES LEFT IN THE SEASON! So our coach sat him right? NO! Eric Mangini, so caught up in pretending to be a mini Belichick, was secretive with his injury reports. So Brett Favre got a consultation, realized it was a serious injury and sat, right? NO! He was so obsessed with maintaining his warrior-like image and that meaningless streak of consecutive games that he insisted on playing. The rest, unfortunately, is history. 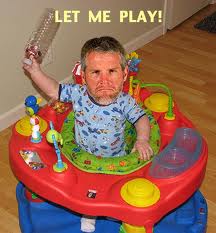 So I’m complaining, but in reality I shouldn’t be. The Jets backup, Kellen Clemens probably would have fared just as well as a broken Favre. Even worse, what if he actually succeeded? Any scenario in history that could have changed the makeup of this current team and/or Eric Mangini being head coach instead of Rex Ryan makes me want to vomit. This recap in Jets history, which I’m sure you all cared little about, was a way for me to vent, but it also has a point. Brett Favre has no business playing this weekend. He’s clearly too hurt to make a contribution that will help the team. Even if he is Brett Favre, if he’s a detriment to his team, then he NEEDS TO SIT.

With all that said, I offer one consolation prize to Vikings fans. This situation is eerily similar to what happened 2 years ago. And there’s a certain fat, boisterous, defensive coordinator who everyone is talking about becoming a head coach next year. SO…I say let Favre play. Let him destroy your season and let him take Brad Childress down with him. Once Childress is gone, you won’t get Rex Ryan, but you get the next best thing: HIS CLONE. A Ryan-led defense with Jared Allen and Kevin Williams and an offense with Adrian Peterson, Randy Moss, Sidney Rice and Percy Harvin? Take my advice, folks. Let him play. Or don’t. I don’t really care…just beat the Patriots.

I’ll put my picks in the comment section. I’ve been lazy and haven’t been keeping track of my record (don’t worry, it’s below .500). But I’ll be writing my mid-season recap soon and will figure it out then.