I feel an apology is necessary.

I was pretty rough on the Rah last week.  For those of you who don’t know, Raheem Morris is the second-year head coach of the Tampa Bay Buccaneers.  Last season, his team went 3-13.  This season, they’re 5-2.  Surprising isn’t a strong enough word.

Between work and the NFL’s blackout policy, I haven’t had the opportunity to watch much Bucs football this season.  The first game I watched in its entirety, in fact, was last week against the Rams, a game which they won, but sloppily. 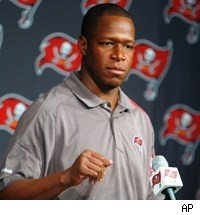 After that win, in his post-game press conference, a confident Morris told reporters his was the best team in the NFC.  Most who heard those comments, including myself, found them laughable.  I wrote a somewhat critical blurb calling anyone who thought Tampa was that good either delirious or extremely uninformed.  As it turns out, I’m the one who’s uninformed.  For that, I must apologize.

I pointed out that the Buccaneers ranked near the bottom of the league in several key categories but as Rah reminded us last week, ‘stats are for losers.’  The only stat that matters is the number in that W column and right now, the Bucs are adding to that number on a weekly basis.  Who would ever have guessed Rah was the smartest man in the room?

In all fairness, the Bucs have had an easy schedule.  The five teams they’ve beaten are a combined 12-24 while the two teams to whom they’ve lost, Pittsburgh and New Orleans, are 10-5 and your last two Super Bowl Champions.

But wins in the NFL are tough to come by.  Just ask the Dallas Cowboys. 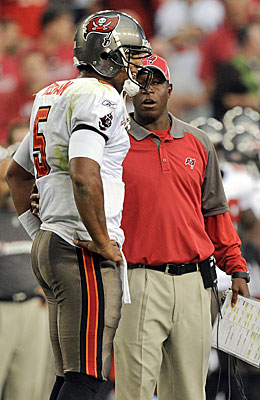 The bottom line is the 34-year old Morris has the men in his locker room playing their hearts out.  Behind the steady play of the quarterback of his dreams, Josh Freeman, and a steal of a waiver wire pick-up in LeGarrette Blount, the Bucs are the second youngest team in the league.  They may be inexperienced but they are…. somebody.

Looking at their remaining schedule, a playoff spot might not be as far-fetched as originally thought.  Did I really just say that?

The Bucs have four home games left, three against Seattle, Detroit and Carolina, all perfectly winnable.  Their five remaining road games are against Atlanta, San Francisco, Baltimore, Washington and New Orleans.  Their two games against Atlanta, including one up there this weekend, will be huge.  So tune in, Bucs fans, and root hard.

With one loss already to New Orleans, it’s unlikely the Bucs will win their division, meaning they might need to shoot for a wild card spot, but how many wins will that take?  Ten?  Nine?  Eight?  Any way you slice it, they’re half way there and a playoff spot, once thought ridiculous is now in sight.

So once again, coach, I apologize.  You’ve made a believer out of me and many more in this community.

Keep up the good work.

31 thoughts on “An apology letter to Raheem Morris”