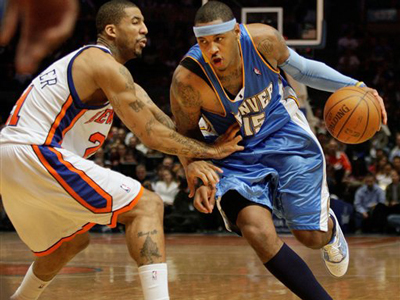 I’m all for juicy trade rumors.  I’m even cool with rumors that are based in no truth whatsoever, simply because they’re fun to talk about.  But when a journalist from a credible newspaper continuously prints these kinds of stories, they get tired, almost comical.  And sports writers think bloggers are bad.

Brian Schmitz of the Orlando Sentinel must have an unhealthy man-crush on Carmelo Anthony these days because he simply can not leave the ‘Melo to Orlando rumors alone.  Never mind that he’s the only person writing about them.

As everyone knows, Carmelo Anthony will become a free agent this summer.  He will likely be coveted by every team in the league, even the ones that can’t afford him.  His current team, the Denver Nuggets, will make every effort to re-sign him or, depending on how they fare this season, trade him to get a return on their investment.

But Orlando?  How could that possibly happen and why would the Magic, one of the best teams in the league, want to totally disrupt a roster that already has a legitimate chance of winning an NBA championship?

Schmitz stands by his reporting.  “When I asked somebody in the organization about such a possibility, that somebody never shook off my sign, never flinched.” 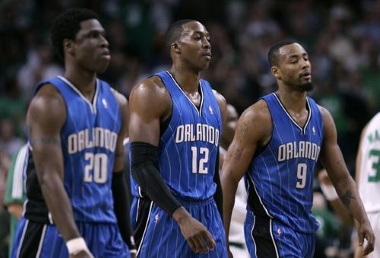 Really, Brian?  Was this person a hot dog vendor?  Deep Throat?  Mr. DeVos himself?  Even if it meant landing one of the league’s best players, why would the Magic tear apart their roster to do that?  Weeks prior, Schmitz wrote that GM Otis Smith felt they can reach the Finals as they’re currently assembled.   So which one is it?  To ‘Melo or not to ‘Melo.  Besides, hasn’t the recent Miami experiment showed us what can happen when you stockpile talent without togetherness.

Look, I love Carmelo Anthony and I’d love him on the Magic, but I don’t know that I’d give up Martin Gortat, Vince Carter, Jameer Nelson, draft picks and my firstborn son to get him.  Orlando is 12-4.  They run ten deep.  Aside from the additions of Carter and Brandon Bass, this core unit has been together for a while and it shows in their play.  They’re the best team in the Eastern Conference and have both the Celtics and Lakers looking in their rear view mirrors.

I’ll apologize to Mr. Schmitz if Carmelo Anthony ends up in Magic pinstripes.  Until then, I’ll just leave him to his fantasy basketball.