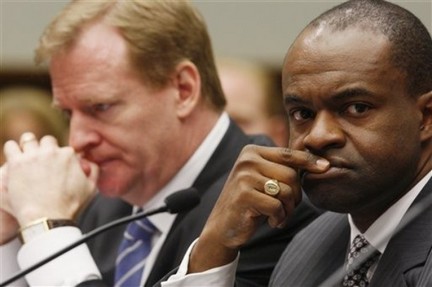 FILE – In this Oct. 28, 2009 file photo, NFL Players Association Executive Director DeMaurice Smith, right, NFL Commissioner Roger Goodell sit at the witness table on Capitol Hill in Washington. A year without a Super Bowl? It may be unthinkable to football fans, but that’s a worry behind a new lobbying push by NFL players. The NFL Players Association is bracing for a showdown with team owners that could lead to a work stoppage when the current collective bargaining deal expires, ratcheting up its lobbying on Capitol Hill under new executive director DeMaurice Smith. (AP Photo/Charles Dharapak, File)