As some of you may recall, at the beginning of this NBA season, I suggested that only three teams (Boston, Los Angeles, Miami) had a realistic shot of winning a title and that if you found someone to take the field while giving you those three teams, you should bet the house.

While I still feel good about that bet, let’s just say I’m pleasantly surprised the field is more competitive that I originally predicted.  The Chicago Bulls finished with the league’s best record behind a rookie head coach and a third-year point guard.  The Spurs concluded the season with the best record in the Western Conference and proved their window of opportunity isn’t as shut as everyone thought.  And the Knicks pulled off a mid-season trade to give their fans hope for the first time in over a decade.

The upcoming playoffs promise to be as exciting as any in recent memory, providing a number of dramatic sub-plots including a renewed Knicks-Celtics rivalry, the chance to finally see what LeBron and Dwyane Wade can do and the potential for an epic Lakers-Spurs Western Conference Finals, all of which should have us glued to our television sets. 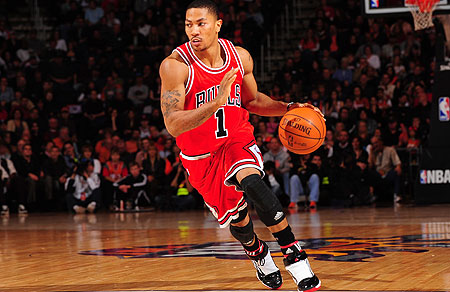 Why they’ll win it all: This season was Derrick Rose’s coming of age party.  It will be hard for any voter to not gift wrap him this season’s MVP award.  He averaged 25 points, 8 assists and essentially carried his team when both Joakim Noah and Carlos Boozer were injured.  Now that Noah and Boozer are healthy, the Bulls will be a tough out as the East’s top seed.  They’re the best rebounding team in the league and will have home court advantage throughout the playoffs, where they went a stellar 36-5.

Why they won’t: While the Bulls are nearly unbeatable within the friendly confines of the United Center, they’re iffy on the road.  That combined with the fact that this team, and their head coach, are relatively inexperienced might lead to their demise.  Despite their record, one still has to wonder whether they’ll be able to topple the star power in the East when it matters most.  Even though they’re perfect against Miami this season, they’ve struggled against Boston and New York, so their post-season success might boil down to match-ups… and execution. 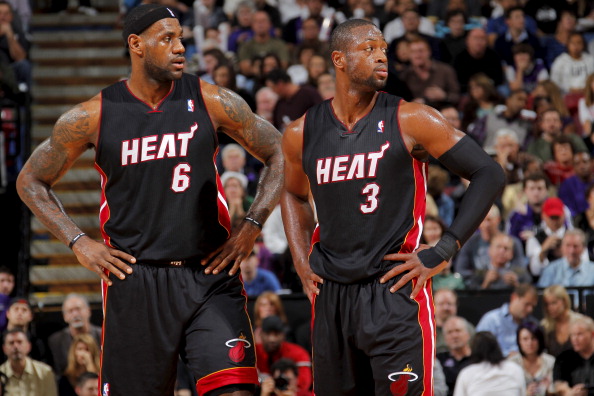 Why they’ll win it all: In case you hadn’t heard, the Heat acquired LeBron James this off-season.  Over 82 games that can most politely be described as bumpy, the Heat still boasted the second best record in the Conference.  Not bad considering many of us were calling for Erik Spoelstra’s head only a few months ago.  Say what you want about this team, LeBron and Wade will be a bear to cover in the post-season. Don’t think for one second they aren’t yearning to silence their critics with an NBA title, the first of many they promised the good people of Miami.

Why they won’t: Despite their star power, the Heat still struggle with their half-court offense.  In a tight ballgame, will they continue to stand around as LeBron forces up ill-advised three-pointers or will they be able to find higher percentage shots?  Additionally, the Heat are horrible (19-19) against teams with winning records, and that’s who they’ll be facing in the playoffs. 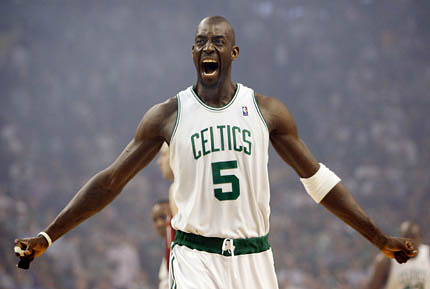 Why they’ll win it all: Kevin Garnett and company are dying to convince the Beantown faithful that anything is still possible.  This team wants another title bad and their time to win one is running out.  They lost an emotional seventh game to their rival Lakers last June and have waited an entire year for some payback.  This off-season, they reloaded with experience and size, most notably Shaquille O’Neal.  As long as they have all their pieces healthy and in place, Boston is one of the Eastern Conference’s best teams and has been all season long.

Why they won’t: Shaq’s durability and the absence of Kendrick Perkins might come back to bite Boston in the butt.  Danny Ainge rolled the dice by trading away their starting center in the hopes that the front line of O’Neal, O’Neal and Davis would be reliable enough to get them back to the NBA Finals.  We’ll soon see if that gamble pays off. 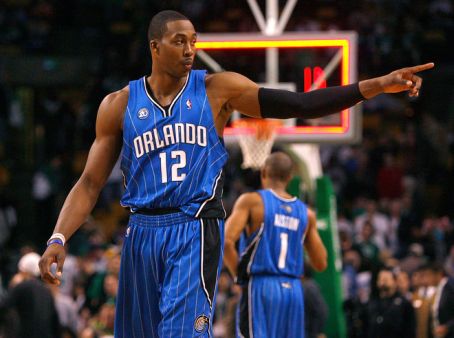 Why they’ll win it all: The Magic have the best big man in the game who just happens to be playing the best basketball of his career.  After finishing second in the league in field goal percentage and rebounding, he might also finish second in MVP voting to Chicago’s Derrick Rose, however, a potential match-up against the Bulls should determine which of the two is actually more valuable.  Howard has vastly expanded his offensive repertoire and is nearly impossible to score upon one-on-one.  The Magic pulled off a mid-season trade to bolster their offense by adding Jason Richardson and Gilbert Arenas and also brought back crowd favorite Hedo Turkoglu, who lifted them to the Finals only two years ago.

Why they won’t: The Arenas/Richardson deal didn’t exactly pan out like management would have hoped.  They still need to prove they can score consistently from the perimeter.  After Howard and Brandon Bass, the Magic lack beef underneath.  Dwight’s proneness for technical fouls could result in lost playing time for the big man.  Without him logging as many minutes as possible, this team can and will not advance. 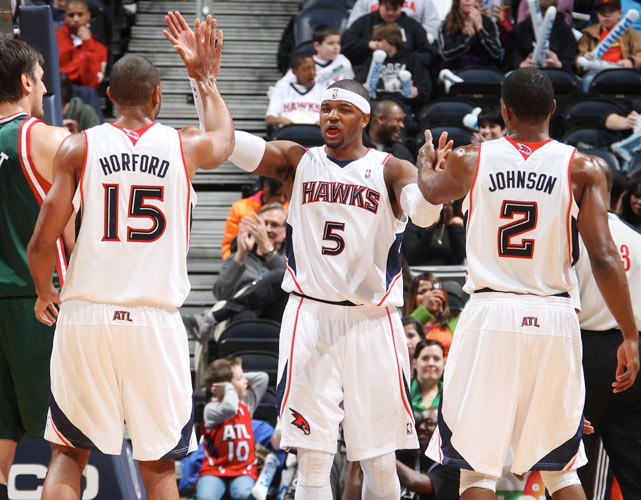 Why they’ll win it all: Atlanta’s core of Al Horford, Joe Johnson and Josh Smith have been playing together for years.  Hawks fans keep waiting for this team to build upon the excitement of taking Boston to seven games only a few years ago.  While having a respectable year, they may have had the most lackluster 45-win season in league history.  They play Orlando in the first round, against whom they went 3-1.

Why they won’t: Despite their solid roster, one can’t help but think the Hawks will once again come up short.  With virtually the same roster, this Hawks team has been unable to get over the hump against more playoff-savvy teams.  It’s hard to think of a reason this year will be any different.  Oh yeah, and they’re a combined 3-13 against the Lakers, Spurs, Bulls, Heat, Celtics and Mavericks. 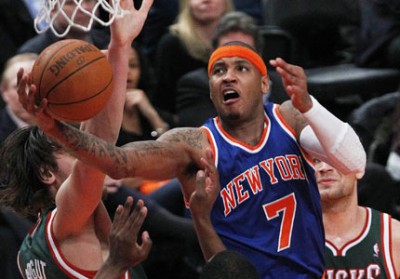 Why they’ll win it all: The Knicks are back… or at least they’re back to being relevant.  It all started with the summer signing of Amare Stoudemire.  Then we were held hostage to the season-long, Carmelo Anthony trade rumors until the deal finally went down.  Anthony-Stoudemire are the best small-power forward combination in the league, rivaled only by Paul Pierce and Kevin Garnett, who they’ll be matching up against in the first round, giving us an old school/new school frontcourt clash for the ages.

Why they won’t: The Knicks essentially gutted their roster to get Carmelo, which means they’re lacking in depth, where Boston is not.  They’re also, how do I put this nicely…. not exactly the best defensive team in the league, allowing 106 points per game.  Defense wins playoff games.  A lack of defense loses them.  That may very well end up being the Knicks downfall. 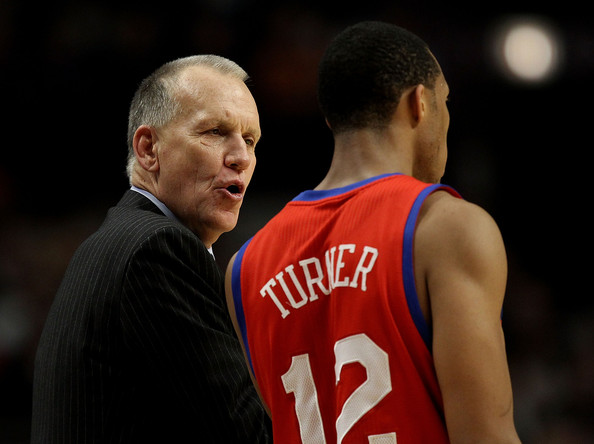 Why they’ll win it all: Don’t worry, they won’t.

Why they won’t: The Sixers are a tough team to figure out.  They play their asses off on a nightly basis but nobody in their right mind expects them to contend, if they even make it out of the first round.  Doug Collins stepped in as head coach and immediately instilled his toughness onto this roster, but there’s no way they’ll be able to beat a scorching Miami team with something to prove and that’s exactly who they play in the opening round. 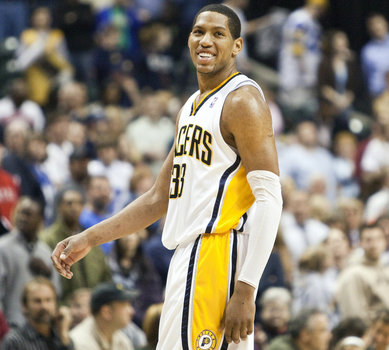 Why they’ll win it all: The Indiana Pacers can beat any team on any given night.  Danny Granger is a poor man’s Kevin Durant.  If they match up well against the Chicago Bulls, they might just be able to pull off the 1-8 upset.

Why they won’t: The only problem is, they don’t match up well with Chicago.  They’re 1-3 against them and Derrick Rose will give Darren Collison all he can handle.  It will be an uphill battle for this Pacers team to do any legitimate damage in the post-season.

Not too many basketball players get the opportunity to fight for a championship at the highest level like the players from these eight teams will be doing, and it takes a lot of hard work to get to this point. For those many thousands upon thousands who come up short, if you are not going to be a pro basketball player but are looking for a great career, check out the national federation of paralegal associations

19 thoughts on “Eastern Conference Playoffs Preview: The Running of the Bulls, Scorching Heat and one big, old Leprechaun”