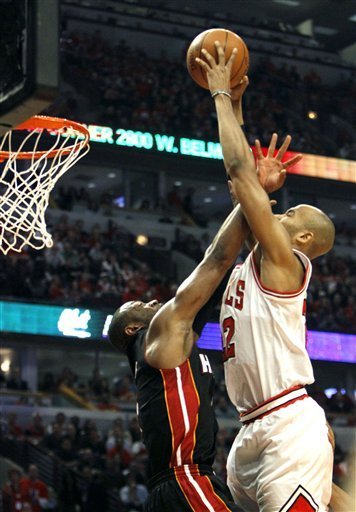 It’s not very often that basketball fans get to see Dwyane Wade on the receiving end of a facial but that’s exactly what we all witnessed Monday night at the United Center.

On a Chicago fastbreak early in the second quarter, Taj Gibson received a pass from teammate CJ Watson… and Dwyane Wade just happened to be in the way.  See below.  Gibson also had a put back dunk late in the fourth quarter that was equally as nasty.  He only finished the night with nine points but four of them were emphatic.

The Miami Heat were favorites going into this series.  After losing Game One by 21 points, that’s probably changed.

Advancing to the Finals will be easier said than done for Miami.  The Bulls outrebounded them by 12 and finished the game with 19 offensive rebounds, hitting Miami right where we all suspected they were weakest: inside.  Instead of doing the dunking, the Heat were the ones being dunked upon.

Adjustments will obviously be made in Game Two as LeBron, Dwayne Wade and company look to turn things around but until then, we’d be remiss if we didn’t show Taj a little love.

26 Replies to “Heat-Bulls Game One in a nutshell: Dwyane Wade, meet Taj Gibson”