Once the Mavericks advanced to the Western Conference Finals, I absolutely loved them against Oklahoma City.  To me, a Dallas victory was a no-brainer.  The Thunder may have been the trendy pick, but trendy is the reason there are so many casinos in Las Vegas.

Throughout recent history, one thing has held true in the NBA playoffs.  Young teams have to take their lumps before tasting glory.  The Association doesn’t hand out championships as door prizes. 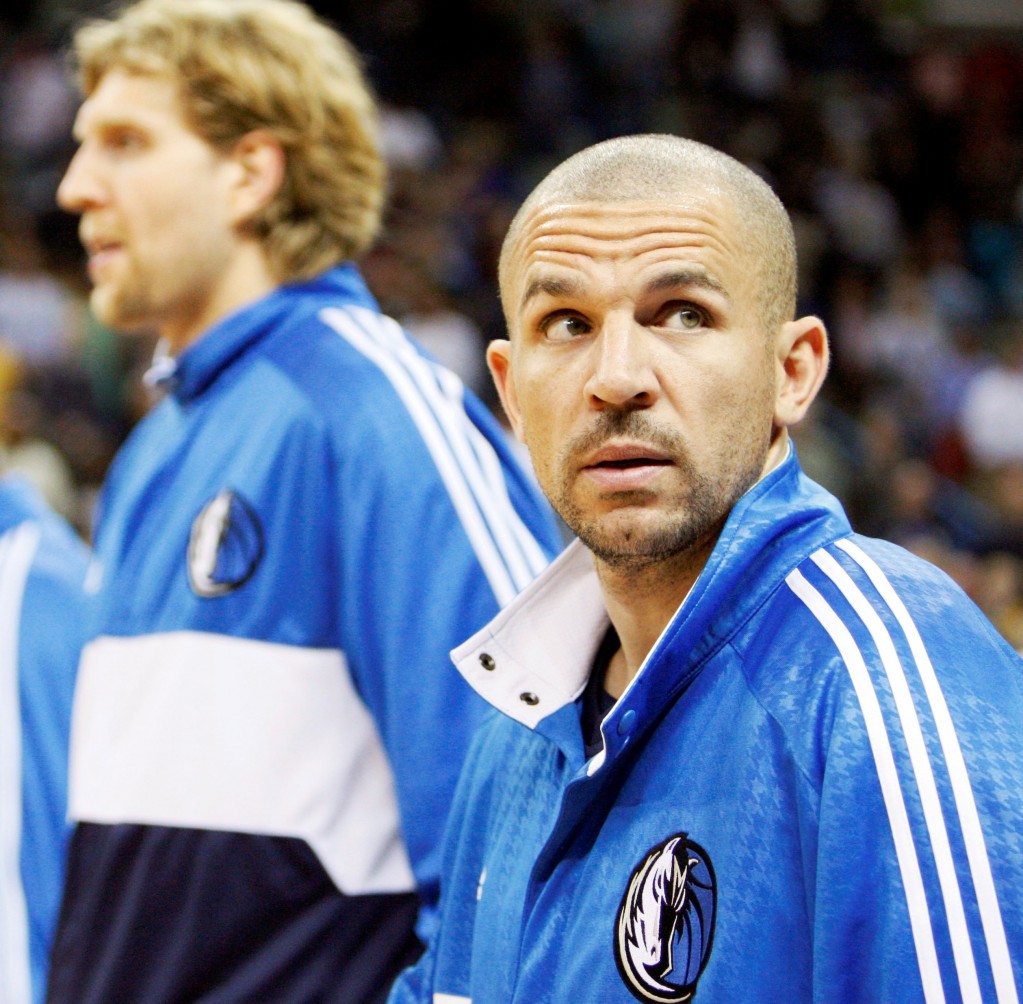 Dallas has taken those lumps.  The Mavs roster was comprised solely of veterans who had come close, only to taste bitter defeat.  Dirk Nowitzki, Jason Kidd, Shawn Marion, Jason Terry and Peja Stojakovic have a combined 62 years in the league.  Kevin Durant and Russell Westbrook combined for five.  Desire is a statistic you can’t measure.

For that reason alone, I saw Dallas as quite the bargain and minus 200.  I was actually surprised so many people liked the Thunder.  One faithful SportsChump reader even wrote in “When you figure out who’s going to guard Westbrook, let me know.”  I’m looking forward to his forthcoming apology post.  Westbrook is talented, but could be forced into taking bad shots. (Note:  He shot 36% in the series).

So I took Dallas, confident about my wager, wanting to bet more.

Then came tip-off of Game One.  When Dirk and Durant started the series 12-for-12 from the floor, I knew we were in for an exciting ride.  Although Oklahoma City kept things close in the first half, Game One went handily to the Mavericks.  Dirk scored 48, including a record 24-for-24 from the free throw line.  JJ Barea added 21 off the bench .  I felt good about my bet. 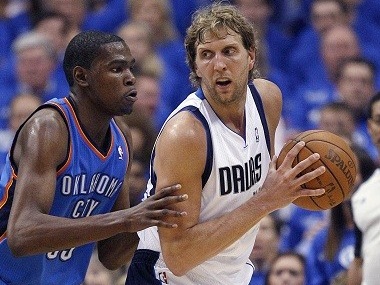 Then came Game Two.  Oklahoma City made adjustments and Dallas played like crap.  I haven’t seen that many players leave their feet to pass since my last pick-up game at the YMCA.  All night long, the considerably younger Thunder looked like the more experienced team while the Mavs look like the soft Mavs of old.

The Thunder bench, which was outscored by 30 in Game One, outscored Dallas’ bench by 20 in Game Two.  A 50-point swing, ironically how much money I bet on the series.  James Harden was unstoppable and OKC looked like it might just be their time.  Uh oh, could I have been wrong?

Then came the turning point in the series.  It was only a matter of time, really. 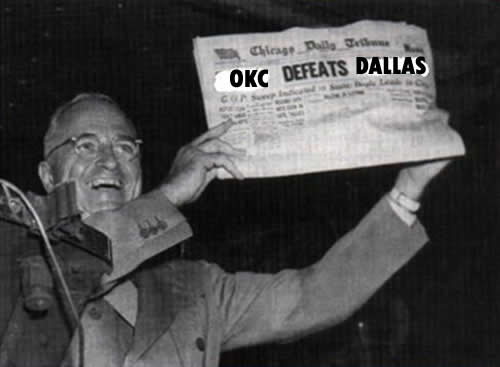 Oklahoma City had Game Four won, over and done, up fifteen points with five minutes to play.  Bags packed, headlines printed, Dewey defeats Truman.  I even received an email from the same Thunder supporter I referred to earlier which read “It’s a good thing OKC didn’t choke that game away and you’ll be apologizing to me in an upcoming SportsChump post.  I mean OKC is really in the driver’s seat now, aren’t they?  (I think I’ll be having a drink in a few minutes).”

Ouch!  As the ink was still drying on that e-mail, Dallas went on a 17-2 run to force overtime and ultimately, a Dallas victory.  Goodnight, sweet prince.  In the post-game press conference, coach Scotty Brooks looked as if he had just seen a ghost.  The ghost of his 2011 Finals chances past, all but destroyed by a seven-foot German named Nowitzki.

In the final game of their season, Oklahoma City pretty much led the entire game, again, until the very end.  Championships are for closers and the Thunder have yet to acquire that skill.  It’s okay.  Neither has Chicago.

Kevin Durant and company could not get it done and for that reason, I’m cashing my ticket at the window.  Memo to self: When I feel that confident about a wager, bet more.

Oklahoma City’s future is bright, but now is not their time.  In another week or so, we’ll see if it’s Dallas’.

38 Replies to “Experience trumps youth: Why my wallet and I liked Dallas over Oklahoma City”